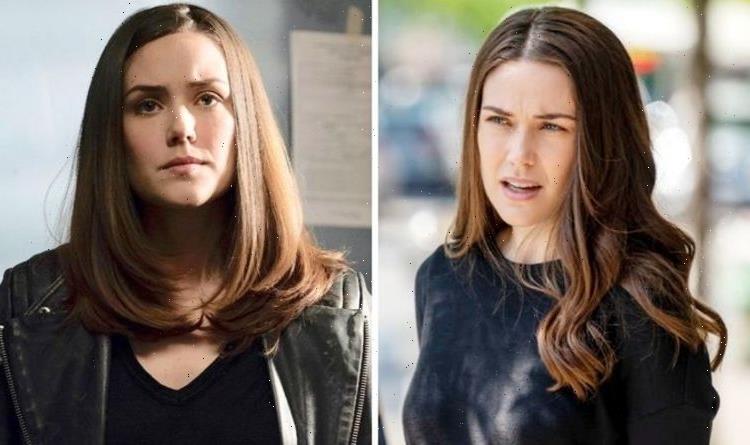 Elizabeth Keen (played by Megan Boone) is no longer part of the task force after her sudden death in the last season of The Blacklist. As Raymond ‘Red’ Reddington (James Spader) and the team’s search for ‘The Skinner’ continues on NBC in season nine, fans have been looking back at some classic episodes and uncovering some unfortunate mistakes.

Agent Keen receives a nasty injury during her pursuit of a cyber-terrorist in the 17th episode of The Blacklist season one, Ivan.

The task force leaps into action when a high-tech cyber defence asset is stolen by a mysterious criminal, and all clues point to a terrorist known only as Ivan.

Although the gripping early episode cemented the show’s popularity back in 2014, some eagle-eyed viewers have spotted a handful of unfortunate mistakes.

One of the most baffling errors in the series occurred when Liz takes off in pursuit of a young suspect.

Her leap through a train resulted in some nasty injuries, though observant fans may have noticed them miraculously disappearing throughout the episode.

A particularly perceptive viewer took to online message forums when they realised the cuts on Liz’s face were gone by the end of the day.

They explained: “Agent Keen breaks the train window and dives through the broken glass and cuts her face in two places as she pursues the young man.

“Her two cuts alternate throughout the following scenes on the train from dripping blood to barely scratches.”

It may not have been outside the realms of possibility if Liz’s face had cleared up by the next episode, or perhaps the start of the next season.

In reality, the deep cuts to her face should have left a small scar, but Liz’s skin is almost completely healed by the time she gets home that same evening.

“That evening at home with her husband her face is practically clear,” the fan continued.

“And at Reddington’s home later that evening her skin is perfect.”

Of course, producers of the show probably didn’t want its leading star Megan Boone applying a cosmetic scar for each episode.

Even so, The Blacklist has maintained some level of realism throughout its nine-season run, and Agent Keen’s extraordinary healing abilities clearly went above and beyond this fan’s suspension of disbelief.

To make matters worse, several other factual errors were spotted throughout the very same episode.

“Early in the episode, a detective knocks on the door and identifies himself as being from the Metropolitan DC Police Dept and displays his badge,” another viewer explained.

“Apparently the prop department gave the actor the wrong badge, because the one he flashes is from the NYPD, not the DC Police.”

Plus, episode 17 seems to have exposed the series’ limited props department, as two guest characters use the same licence plate throughout the first season.

Another fan said: “The license plate of the car used by Platt (93N-LI62) is the same as the one used by Charlotte Patterson in episode 13 (season 1): The Cyprus Agency.”

Thankfully, despite numerous gaffes over the years, The Blacklist has remained a must-watch drama into its ninth season and will continue to thrill fans into the new year.