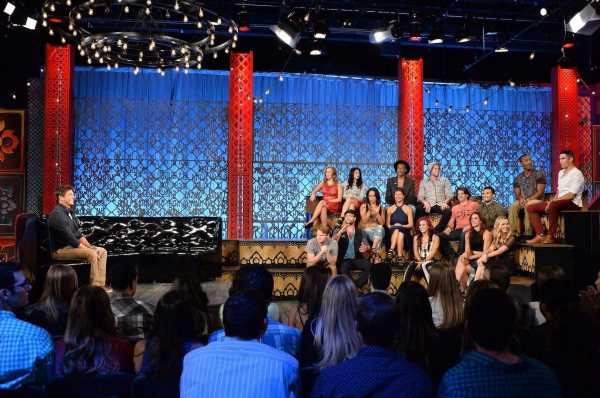 MTV’s The Challenge: Spies, Lies, and Allies continues to bring twists and turns to the game. The beginning of the season showed the all-veteran alliance dominating over the international rookies. But a few strong rookie survivors still remain in the game. While Logan Sampedro is still in the game, he’s injured. Does he get disqualified from the game for his injuries? Here are The Challenge Season 37 spoilers regarding how far he goes.

[Spoiler alert: The Challenge Season 37 spoilers ahead regarding Logan Sampedro and the remaining rookie players.]

MTV’s The Challenge Season 37 Episode 11 showed Logan at risk of possibly entering The Lair. At the start of the episode, Logan is part of the Ruby Cell along with Cory Wharton, Emy Alupei, Big T Fazakerley, Priscilla Anyabu, and Kyle Christie. While the Ruby Cell nearly wins the daily challenge, a blunder from Kyle caused the team to lose. The Emerald Cell pulled off their second win.

While Logan did well for his team, he continued to tell the camera about his leg injury. In a prior episode, Logan noted he felt a strain in his leg during a daily challenge, and it soon became common knowledge to the rest of the contestants.

The Challenge Season 37 spoilers for episode 11 note Ed Eason from the Sapphire Cell went into The Lair against Kyle. While Ed could’ve gone against Logan instead (and likely won due to Logan’s injury), he noted he wanted a fair fight. Kyle won the elimination challenge, sending Ed home.

‘The Challenge’ Season 37 spoilers: Does Logan Sampedro get disqualified due to his injury?

What happens with Logan’s leg injury? According to MTV’s The Challenge Season 37 spoilers, Logan doesn’t get disqualified for his injury. In fact, Reddit spoilers note he enters The Lair against veteran player Cory Wharton — and he sends Cory home. When he enters The Lair, it’s likely he’s still dealing with his injury as well.

Unfortunately for Logan, he doesn’t make it all the way to the final. Toward the end of the game, he’s reportedly thrown into The Lair against Emanuel Neagu, a fellow rookie player currently playing on the Emerald Cell. Emanuel wins against Logan, sending him home.

A number of other players went home due to injuries this season, though. Aneesa Ferreira and Tommy Sheehan both left early on after getting hurt during daily challenges.

Which rookie player makes it the furthest in the game?

While the all-veteran alliance attempted to wipe out every rookie player at the beginning of Spies, Lies, and Allies, MTV’s The Challenge Season 37 spoilers note a few manage to make it quite far.

The Challenge Season 37 airs at 8 p.m. EST on Wednesdays via MTV.