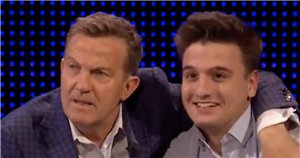 The Chase fans saw 20-year-old contestant Eden make history by winning an incredible £75,000 on the show on his own.

The show's host Bradley Walsh, 61, was in awe as he revealed contestant Eden had achieved the biggest win by a solo player in the show's history.

After he beat Chaser Darragh Ennis and his six-month winning streak, the contestant was understandably lost for words.

Eden was the last contestant remaining in his team after he made it to the final. He had already made £3,000 in his cash builder round before choosing to aim high and go for the offer of £75,000.

Moments before Eden made history, Bradley asked him what he would do with the money if he won.

"I suppose a car would be nice… But nothing snazzy," he humbly said. "Just anything with four wheels."

When the player won after he answered 18 questions correctly, Bradley was amazed by his performance.

"You did very well, it was all about the pushbacks in the end," Darragh joined in.

The quizzer also shared his congratulations by writing on Twitter: "#TheChase great and well deserved win for Eden," alongside a clip of the incredible moment.

Fans were delighted by their exchange, with one One fan wrote to Darragh: "There is such sincerity in the way you congratulate him it's absolutely lovely.

"I think the fact that you've been a contestant endears you to so many. You're a breath of fresh air on the show fair play."

Another added: "You should keep an eye on Eden as he would make a great Chaser.

"Reminded us of when you were on it."

For all your updates on The Chase, sign up to our daily OK! newsletter.