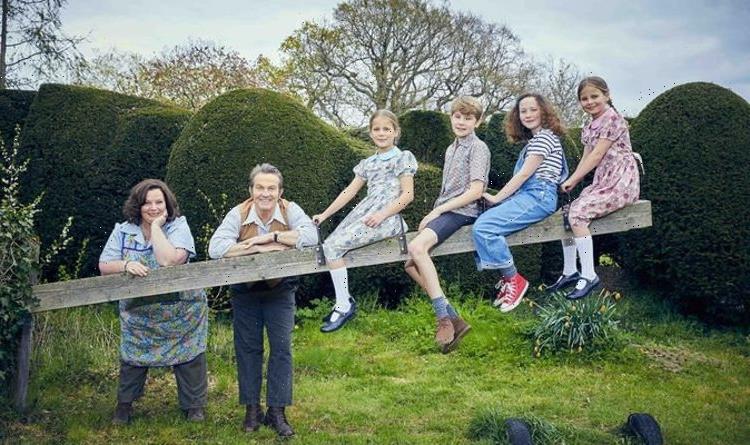 The Larkins is coming to ITV tonight (October 10) and the escapist family drama follows Pop Larkin (played by Bradley Walsh), his wife and children. The series offers insight into the personal lives of the working-class family in an idyllic countryside location. Having filmed in Kent, director Andy De Emmony spoke to Express.co.uk and other media about the difficulties.

Where is The Larkins filmed?

The 2021 adaptation was filmed across Kent, Surrey and London, with the main location for the original series being the village of Pluckley in the Garden of England.

The location for The Larkins has not been revealed, but it is once again a working farm in Kent.

Director De Emmony said the location did create some challenges, and he spoke to Express.co.uk about what happened.

He said: “The only challenge we really had was the weather, which was a nightmare.

“Despite everything looking fine on camera we were in and out of rain. I hadn’t really spent much time in Kent.

“Which, as it turns out, is beautiful. I normally just travel through. But we made the most of it.

“We got drones out, the area we were in was particularly beautiful, it went well with the period.

“With a big ensemble cast we wanted to make the camera a part of that process, so it was very much personal camera work, working amongst the cast.

“It’s very much a character piece in that way so I wanted to take the audience on that journey with them.”

Bradley Walsh, who plays the patriarch of the family, loved the excitement of filming on a working farm.

But he too raised difficulties with the location, saying it set off his hay fever on a regular basis.

He also mentioned how he was nearly “crushed” by one of the pigs after director Andy got him in the pig pen to film.

Opening up about what inspired him to take the series on, Andy added: “I don’t really remember the original series very much.

“Some of the scripts are warm and touching but very funny and it’s that combination, the laughter and tears, that drew me.

“It’s quite nice, a project where we aren’t killing anyone, that all appealed.”

He said it was great timing for the series to be released following the turbulent times amid the coronavirus pandemic.

Some local shops in Faversham were given a 1950s makeover for the ITV series.

Underriver, Eynsford and West Peckham were used for scenes outside of the farm.

The series is made up of six episodes, and they will be airing weekly on Sundays at 8pm on ITV.

The season finale is set to air on November 14, and a Christmas special is already in the making.

Fans of the original book series will have plenty to look forward to with the festive period drawing in.

The cast said the Christmas special would offer up something totally unexpected, and the excitement is already building.

The Larkins airs on Sunday, October 10 on ITV at 8pm.