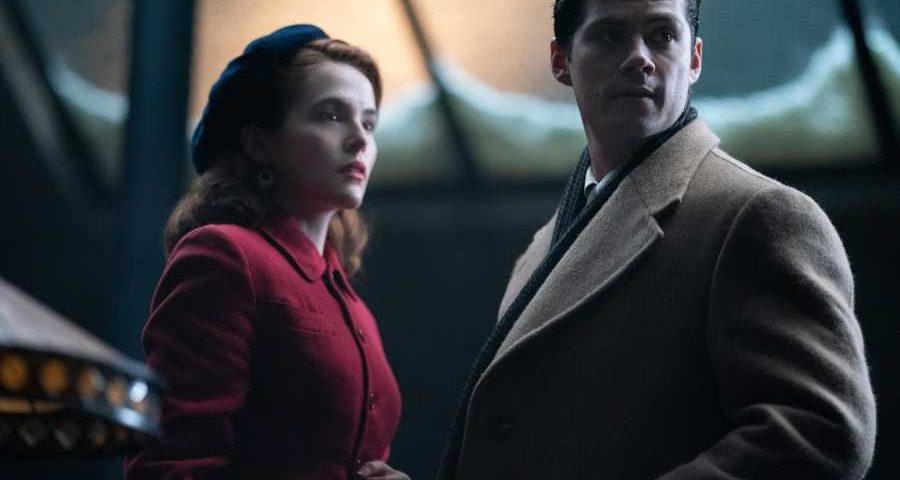 On the south side of Chicago, there’s a small shop at the end of a quiet, snowy street. Its proprietor, a man named Leonard Burling (Mark Rylance), makes suits. Please don’t refer to this courtly English gentleman as a tailor, however — he spent many years apprenticing on Savile Row as a “cutter,” which is a very different skill set, indeed. When Burling eventually left his native country, he set up shop in the Windy City and made a name for himself as a provider of beautiful suits for a discerning clientele. Because the year is 1956 and this is a neighborhood that still lives in the shadow of Capone’s legacy, his customers are mostly gangsters. Specifically, the Boyle family organization, who run the town with an iron fist sticking out of customized, impeccably fitting sleeve.

'The Trial of the Chicago 7': The Sixties Told in Sorkinese

How True Is 'Respect'? Fact-Checking the Aretha Franklin Biopic

To say that Mr. Burling is a modest man does not do him justice: He is the type of fastidious, self-effacing person who tries to recede into the background and let his creations do the talking. If thugs and brutes want to use his shop’s backroom as a drop zone for ill-gotten loot, that’s their affair. They have their business, which allows him to keep his. “If we only allowed angels to be customers,” Burling tell his receptionist, a local Irish-American lass named Mable (Zooey Deutch), “soon we’d have no customers at all.” It doesn’t mean that he’s happy when this young woman, who he dotes over like she is his own daughter, begins to take up with Richie Boyle (Dylan O’Brien), the heir to the criminal empire. But he says nothing, and he hears nothing, and he sees nothing. Until a gang enforcer named Francis (Johnny Flynn) and Richie, with a slug in his belly, burst into his store late one night in need of shelter, and the choice to remain above it all no longer becomes a choice at all.

What we have here is something new assembled, painstakingly and piece by piece, out of old cloth, yet burnished to such a fine throwback sheen that it creates a self-contained time warp — the same dissociative tingle you might get when entering some artisanal Hipsterville pop-up that’s gone to great lengths to recreate an Amish barn. It does not want to be your grandfather’s mobster movie, though it does take place in a shop he would have purchased a silken waistcoat in. The Outfit is a crime thriller made to order, and one that takes pride in how it looks, how things fit on it, the shape it cuts when it moves. “This isn’t art, it’s a craft” is how Burling describes his trade. “We can talk about art later.” You can almost hear cowriter-director Graham Moore clearing his throat behind that line of dialogue. He’s not talking about the art of cutting fabric that, once the separate, sliced fragments are assembled and tapered, results in streamlined formal attire. He’s talking about the bespoke pulp you’re watching. Clothes make the movie.

It does look absolutely gorgeous, a virtual den of dark browns and charcoal grays and, courtesy of Deutch’s wanderlusty Mable, an occasional smattering of primary colors and plaids. Moore won an Oscar for penning The Imitation Game, which largely ran Benedict Cumberbatch through his Oscar-bio paces in either the Enigma project’s headquarters or Alan Turing’s tiny apartment. He’s limited the locations down to just a single interior this time out, with a few glimpses of the wintry outside for good measure. But mostly, we stay inside, all the better to bask in the lighting of cinematographer Dick Pope — himself a consummate professional on the level of Burling’s clothier — which gives everything the golden glow of a workshop glimpsed through a tumbler of 20-year-old Scotch. As for the costume design, Sophie O’Neill and Zac Posen don’t deserve future Oscar consideration for their work here. They deserve a shrine for these suits, or at the very least, a pair of solid gold shears.

If you know Rylance’s work primarily from the theater, especially his Tony-winning turn in Jerusalem, then you know he can be a dynamic stage performer, someone who can shake rafters with his voice or level stone walls with a gesture. His screen work, however, tends to tamp down on the physicality and rely on his lantern-in-the-dark eyes and tempered expressionism. Watch him as a Soviet intelligence officer in Bridge of Spies or (god forbid) a socially awkward tech guru in Don’t Look Up, and you’ll observe a master of less-is-more precision, control and technique; he seems tailor-made (sorry) to play a man like Burling. Especially once this genteel man goes into survival mode, and has to start playing grandmaster-level chess with the various mobsters, mugs, and miscellaneous players in order to get through the night. There’s a rat in the Boyle organization, see, which puts our hero in both a precarious position and gives him the chance to plant seeds of doubt all around. When everyone’s aiming pistols at their fellow smooth criminals, they aren’t pointing their guns at Burling. A few polite nudges this way and that, and you’d be surprised how suggestive folks can be.

Rylance has to navigate all of these cunning maneuvers and strategic countermoves, letting the audience in on what the character thinking, while hiding his hand to everyone he’s manipulating — it’s a lot of layers to peel back, a lot of dramatic peekaboo games in play. We haven’t even mentioned the dead body that’s hidden in Burling’s backroom, or the audio tape floating around that reveals who the rat is, or the rival gang that’s warring with the Boyles, or the fact that a national criminal syndicate known as “the Outfit” that may want to recruit this Chicago mob into its lucrative network. (Bonus points for the double-meaning movie title!) And the big pleasure in watching how The Outfit unfolds is simply observing Rylance at work, whether it’s meticulously constructing a suit or concocting a thug-shoot-thug set-up. When Simon Russell Beale enters the picture right past the midpoint — he’s the big-cheese patriarch of the Boyle family, a man who fancies himself a dandy despite his brutal nature — the film pauses to let these two British theater titans carry on a long discussion about making your way in the world, how choices dictate fates, why thinking the means justify the ends is self-delusional. For all of the genre trappings and couture porn and old-school decor eyegasms, their scenes together are where you feel yourself leaning in the most. Give Rylance and Beale their own My Dinner With Andre, for God’s sake.

Moore has mentioned that he and Jonathan McClain started out with the idea of doing something about a Savile Row tailor and ended up making a movie about complicity — a concept that continues to be forever pertinent in this day and age, even if you set the story in a bygone era. They can’t seem to resist making things overly complicated, however, or start adding in one secret too many, one twist too much. There’s a pile-up of climaxes that feel a little less impactful even as the stakes are raised higher, and it’s hard not to wish that, like Burling’s brushed and perfectly measured suits, they kept the storytelling a little simpler and thus more elegant. The Outfit still stands out, if for no other reason than it’s a movie by adults for adults in an age of off-the-rack blockbusters and knock-off prestige pics. It just needs to be taken in a bit around the shoulders and let out around the cuffs.