It’s every teenage girl’s dream: The high school PTA has just announced they’d rather cancel prom than let you bring your girlfriend, when a gaggle of garishly dressed Broadway stars you’ve never heard of storms in singing, “We are gonna help that little lesbian…”

Although these colorful coastal elites cause quite a stir while managing to muddle everything up, they give you a mall shopping spree, a sequined shoulder to cry on — and some killer song and dance routines. That’s “The Prom.”

Aside from its impassioned overtures for LGBTQ+ rights, “The Prom” has all the makings of a classic Hollywood musical: Haughty urbanites descend reluctantly on a small provincial town seeking validation and instead find love, connection, and renewed life’s purpose. It’s like if the strivers from “The Philadelphia Story” went to Allentown to help Peggy Sawyer find her way to “42nd Street.” And it’s exactly the kind of feel-good entertainment we needed this year.

While director Ryan Murphy is no Busby Berkeley, he sure knows how to put together a team, from an impeccable ensemble — an eclectic mix of big names and fresh faces — to his longtime costumer Lou Eyrich, who does some her best work draping Meryl Streep and Nicole Kidman in the kinds of bright, eye-catching yellows and magentas you’ll not soon see either actress in again.

But Murphy’s most inspired choice was in tapping revered cinematographer Matthew Libatique, Darren Aronofsky’s frequent lenser who also shot 2018’s “A Star Is Born.” Under Libatique’s masterful eye, the camera circles effortlessly around thrilling choreography by Casey Nicholaw, the show’s Broadway director, whose stage vision translates surprisingly well to the screen thanks to the movie’s visual flair. 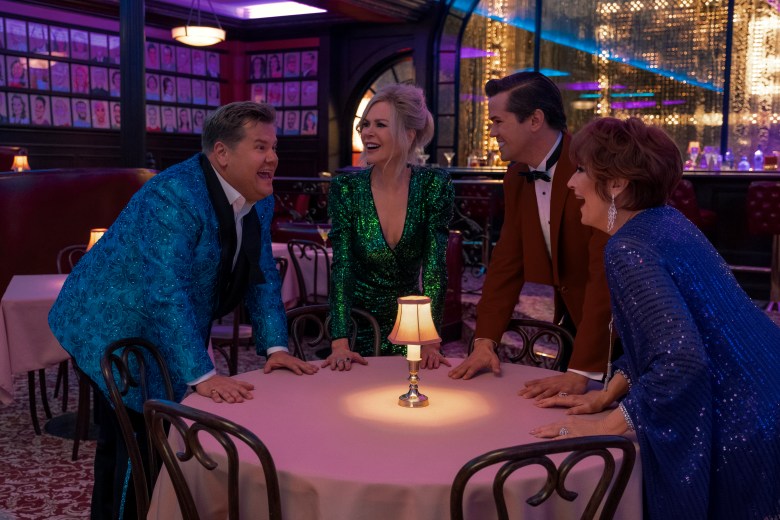 Of course, all this glittering decadence would be for naught without the adorable story, which was written by Bob Martin and Chad Beguelin and based on an original concept by Jack Viertel. The music, which is catchy in a serviceable way but not chill-inducing in that musical theater way, was written by Matthew Sklar and David Klotz. But it’s Beguelin’s clever lyrics, packed to the brim with jokes and overflowing with heart, that made “The Prom” the surprise hit of the 2018 Broadway season.

And the movie doesn’t deviate from that path. “The Prom” opens with Broadway stars Dee Dee Allen (Streep) and Barry Glickman (James Corden) opening “Eleanor!” the musical, about the life of Eleanor Roosevelt, which closes that very same night. While drowning their sorrows at Sardi’s, they hatch a plan with fellow actors Trent Oliver (Andrew Rannells) and Angie Dickinson (Kidman) to rehabilitate their image and divert attention from their terrible reviews. A quick Twitter perusal alerts them to the plight of Emma Nolan (Jo Ellen Pellman), an Indiana teenager whose desire to bring a girl to the prom has caused the PTA, headed by the formidable Mrs. Greene (Kerry Washington), to cancel the dance altogether.

Announcing themselves as “liberals from Broadway” who are “as gay as a bucket of wigs,” this dream team arrives without a plan, meeting with more resistance than they imagined. While Dee Dee finds a fan in handsome principal Hawkins (Keegan-Michael Key), Trent sets about convincing the conservative high schoolers to “Love Thy Neighbor” in one of the movie’s outstanding dance numbers. Rannells, who got his big break in “The Book of Mormon” but later became known for HBO’s “Girls,” shows off his Broadway bonafides, going toe to toe with the snappy dancers, who seem plucked fresh from Broadway chorus lines.

As the leader of the group, Corden’s Barry is chirpy and eager to please, plopping his Drama Desk Award next to Dee Dee’s two Tonys in an effort to bribe the Days Inn clerk (who remains unimpressed). Armed only with a bright green murse and a can-do attitude, his sweet friendship with Emma inspires him to reconnect with his estranged mother (third-act arrival Tracey Ullman). 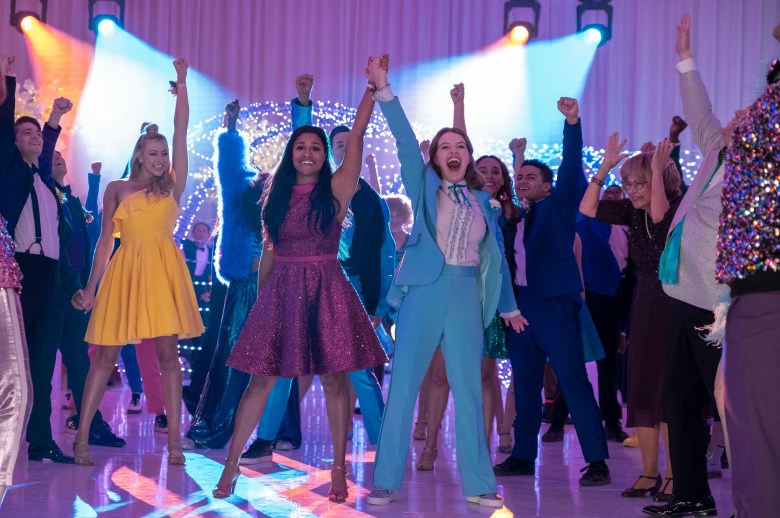 As fantastic as every cast member is — and there isn’t a dud in the bunch — it’s still Streep’s show. Donning an elegant red wig and a dizzying array of brightly colored pantsuits and fur capes, Streep dips into her throaty lower register to deliver a bevy of bangers. To the boys outside the principal’s office, she oozes coquettish maturity to ask: “Ooh, what’d ya do?” She drapes the same tone on the word “narcissists,” drawing out the first vowel as luxuriously as she props her white chunky boots on the back of a bus seat. She brings an erotic charge to her scenes with Mr. Hawkins, and Key’s beautiful singing voice is matched only by his ability to keep it together … while being seduced by Meryl Streep.

There may be a lot going on, but Murphy and the writers see to it that Emma doesn’t get lost in the shuffle. Newcomer Pellman imbues the young protagonist with a wide-eyed optimism, and deftly handles the show’s more emotional ballads with her smooth mixed belt. Her somewhat fraught romance remains mostly innocent, but the payoff is worth it in the end.

It would be easy to write off “The Prom” feel-good brain candy or pop culture awash in a trendy social message. But that’s par for the course with Murphy’s work, and he delivers on expectations. More than that, “The Prom” has one quality that has become all too rare in entertainment: It’s unafraid to be fun. With a star-studded cast, dazzling design, and thrilling dance numbers, “The Prom” is the best of what Murphy can offer Hollywood — a taste of the past with its eyes on the future.

“The Prom” starts streaming on Netflix on Friday, December 4.