Netflix will be dropping The Rain later this week as the Nordic sci-fi series gets its final outing. The show first aired in 2018 and saw terrible rain bring about the apocalypse as a virus was spread, killing all those it landed on. Express.co.uk has everything you need to know about the final series.

How many episodes are in The Rain season 3?

WARNING: This article contains spoilers from The Rain season 2

The Rain season three will be released on Thursday, August 6.

Season three will consist of six episodes in total which will be dropped in one go and is the same length as the previous outing.

Fans of the show will finally get to see how the story comes to an end after the world was left decimated by a deadly virus.

The action will be picking up from the end of the shocking season two cliff-hanger. 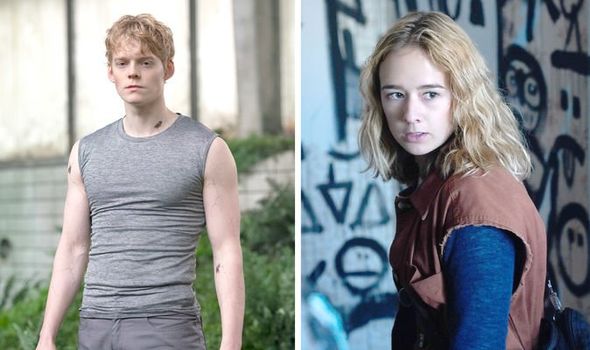 A trailer for the last run was dropped by Netflix recently and revealed siblings Simone (played Alba August) and Rasmus (Lucas Lynggaard Tønnesen) at odds with each other.

While Simone wants to find the cure for the virus, Rasmus appears to be working with Apollon to give the human population a version of the infection which lives inside of him.

However, whether Apollon’s strategy to save the human race will work remains to be seen.

From season two and the horrifying discovery Martin (Mikkel Boe Følsgaard) and Patrick (Lukas Løkken) in the last series, Apollon’s experiments to infect humans with the virus to build immunity had disastrous consequences.

The teaser also hints Simone may be forced to kill her younger brother if she believes they can’t find a cure and Rasmus will be a danger.

Stuck in the middle of this battle will be Jean Sonny Lindberg, Fie (Nathalie Madueño) and Kira (Evin Ahmad).

Other questions will remain about whether the group can escape from the quarantine zone after accidentally taking deadly pills which would kill them if the exited the perimeter.

Viewers will also see how the storyline is wrapped up particularly after Ramus seemed to unwittingly bring Sarah (Clara Rosager) back from the dead.

Along with the main cast coming back, there will be some new faces in the last series including Rex Leonard as Daniel, Cecilia Loffredo as Luna, Henrik Birch as Lars and Annemette Andersen as Trine.

The Rain is one of the most watched non-English language shows on Netflix, along with Money Heist and Dark.

The show has attracted over 30 million viewers to date and many more are likely to tune in to see how the show is brought to a close.

Season three of The Rain got the greenlight back in June 2019 with Netflix confirming the news via social media.

The show premiered as Netflix was ramping up its science fiction content and came after the success of Stranger Things and Dark.

Also, the show came out around the same time as Lost in Space and Altered Carbon.

However, it looks like Netflix is moving away from its science fiction output and focusing more on other areas.

Director Kenneth Kainz said of shooting the series: “It’s been a challenge to shoot The Rain, where the rain is dangerous in this part of the word. It rains heavily during the summer in Denmark.”

He went on to say: “It’s been an immense technical challenge to create an empty and abandoned Copenhagen.”

While the shooting may be proved tricky, the programme-makers have succeeded in created a post-apocalyptic city.