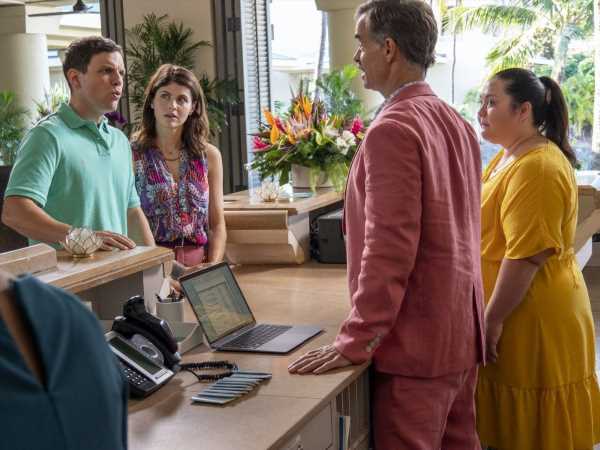 HBO’s limited series, The White Lotus, introduced viewers to a whole group of unlikable characters. However, the ensemble cast is on point, the writing is excellent, and the interactions between the characters are uncomfortable but gripping to watch. From the performative woke Gen Z, Olivia Mossbacher (Sydney Sweeney), to the hotel manager turned sexual predator Armond (Murray Bartlett), it’s hard to tell who is the worst. Viewers weighed in on the unredeemable qualities of Olivia, Armond, Shane (Jake Lacy), and Kitty (Molly Shannon) to decide who is the worst character on the show.

Although Saturday Night Live alum Molly Shannon only first appeared in The White Lotus Episode 4, she quickly joined the worst characters list. Shannon portrays Shane’s mother, Kitty, who unexpectedly dropped by on her son’s honeymoon. Within seconds of greeting her son and new daughter-in-law, she added fuel to the fire regarding the suite debacle, commenting that this is not the room she booked.

“Shane’s mom is just awful,” one viewer wrote on Reddit. “[Kitty] shows up at her son’s honeymoon and talks about how planning everything for the wedding was such a drain on her already very comfortable life.”

Kitty is not intentionally mean or evil; however, she’s so wealthy that she doesn’t understand why someone would want to work if they don’t have to. This article ranks her at number four on the scale of worst characters in The White Lotus.

Shane Patton is coming in right ahead of his mother on the scale of worst characters in The White Lotus. He’s immediately caught up in the fact that he and Rachel (Alexandra Daddario) have the wrong suite at the resort, and he won’t let it go. Shane is arrogant and doesn’t seem to care about anyone’s feelings but his own. As Rachel begins to question whether she’s made the right choice marrying him, Shane doesn’t even notice that something is wrong with his wife.

“Shane is a privileged self-entered d-ck, who cannot handle if somebody does not adhere to what he wants, but he is not purposefully mean,” another fan wrote in the same Reddit thread.

Like his mother, Shane is awful but not exactly intentionally mean. He’s oblivious to his privilege and thinks everyone is there to serve him.

The resort manager at The White Lotus, Armond, explained to Lani (Jolene Purdy) in episode 1 that their role is to get the guests whatever they want. He tried his best to appease Shane, although the room mistake was Armond’s fault. The manager spent the entirety of the first episode catering to the guests. He explains to Lani that it’s always important to “stay positive.” However, he begins to lose it when Lani goes into labor. Armond felt awful that he didn’t notice that Lani was pregnant, and then a bag of drugs fell into his hands. After five years of sobriety, Armond took a prescription pill at the end of episode 2. He quickly headed on a downward spiral of drinking and drug use that put him in the category of worst characters in The White Lotus.

“While Shane annoys me, he wouldn’t be such a pill if Armond had just been upfront and apologetic,” another Redditor wrote. “He took medication that for all he knows could be keeping someone from having debilitating anxiety and health problems. Then he is a sexual predator on top of all of that. Yeah, Armond is the worst for me.”

While some fans believe Armond is the worst character, others sympathize with him because of his addictions.

The worst character in ‘The White Lotus’: Olivia Mossbacher

Viewers almost unanimously choose Olivia Mossbacher as the worst character in The White Lotus because she lacks empathy. The sophomore in college argues with her parents because they aren’t as woke as her and Paula (Brittany O’Grady). However, Olivia claims to care about those less fortunate than her but doesn’t show it with her actions.

“She has zero redeeming qualities,” one fan wrote on Reddit. “It’s clear she isn’t actually progressive. Her friendship with Paula is based on appearing progressive, while in reality, she treats Paula like property. She looks down on her family, but she is not different.”

Viewers believe that the concern for oppressed groups is an act. It doesn’t seem like she has any genuine empathy for anyone. As The White Lotus continues, fans found out more about how she stole Paula’s guy and then flirted with her new love interest. On the scale of worst characters in HBO’s The White Lotus, Olivia is at the top.

The White Lotus airs Sundays at 9:00 p.m. ET on HBO and is available on HBO Max.