In typical finale fashion, things are an absolute mess atop Episode 8 of The Witcher‘s second season. Ciri is under Voleth Meir’s control, Geralt is on the outs with Yennefer, and Roach is but a distant memory. (Some of us are still in mourning, OK?)

While Ciri’s consciousness remains trapped in her previous life, complete with all of her relatives, her physical self manages to move through Kaer Morhen like a whisper, slitting several witchers’ throats in their sleep. And were it not for Geralt and Yennefer’s perfectly timed entrance, Vesemir would be next.

Vesemir, naturally, wants to kill Ciri and be done with it, but Geralt insists that she’s strong enough to survive this possession — they just need to pull Voleth Meir out of her. No sweat.

While Yennefer concocts a potion to expel Voleth Meir, Ciri pays a visit to the giant tree where the witchers’ hang the medallions of their fallen. And she isn’t there to pay her respects. Through a series of screams, Ciri cracks the tree in half, revealing a huge monolith, which she then destroys and uses to summon three giant basiliks from another sphere. If this feels like a lot, that’s because it’s a lot.

“Poor, poor witchers,” Ciri says, taunting them as they struggle to fight off her beastly trio. “You feel everything, don’t you? Especially hatred.” Sensing the pleasure in her voice, Geralt deduces that she’s been feeding off their collective hate this whole thing, which is how she’s become this powerful.

Reenter Yennefer, who explains that Ciri can’t be saved unless Voleth Meir goes into another vessel. As a make-good for her betrayal, Yennefer offers herself up as the witch’s new host, but when Ciri uses the monolith to open another portal in which to trap the newly possessed Yennefer, all three end up getting pulled through. 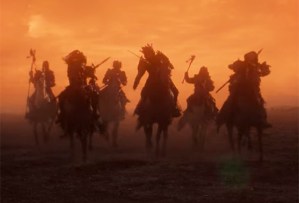 Geralt, Ciri and Yennefer find themselves in a strange new sphere, one that looks like a cross between a desert and straight-up hell. Voleth Meir suddenly exits Yennefer’s body — her whole plan was to use a human vessel to get herself home, where she can exist without the aid of a host — but before anyone has a chance to celebrate, the trio is ambushed by (gulp) the riders of the Wild Hunt.

“Child of the Elder blood, starry-eyed daughter of Chaos, join our Hunt!” the skeletal beings tell Ciri. “Your place is among us. You are ours.” Fortunately, Ciri is able to teleport the trio back to Kaer Morhen, but it’s still pretty traumatic.

It’s clear to Geralt that he and Ciri can no longer stay at Kaer Morhen; the more people find out she’s alive, and what she’s capable of, the more danger they’ll be in. There’s just one thing bugging him at this point: How does Nilfgaard know the truth about Ciri? 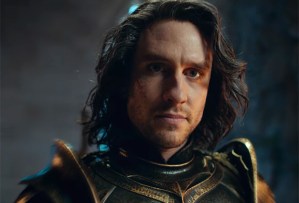 Then comes the big reveal. We’re introduced to Emperor Emhyr var Emreis (aka the mysterious leader of Nilfgaard), who takes full credit for ordering the death of Francesca’s baby.

As he explains, “It was the best path to helping me find my daughter.” In case that’s too subtle, Emhyr then does a dramatic turn-around to reveal that he’s… Ciri’s father Duny?!

Your thoughts on this twist? Season 2 in general? Weigh in via our polls below, then drop a comment with your full review.