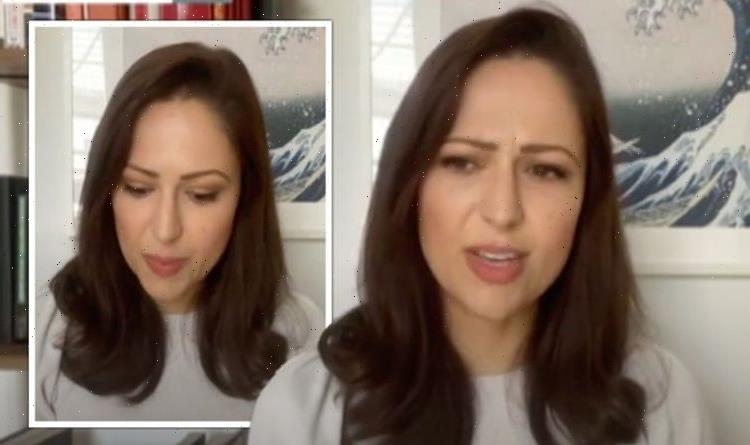 This Morning was hosted by Ruth Langsford and Eamonn Holmes on Wednesday morning. The presenting duo led a debate about the ongoing situation in Afghanistan as the Taliban has taken over. They welcomed broadcasters Nick Ferrari and Nicola Thorpe onto the programme to discuss the UK’s response. However, things got a bit too much for Nicola who was emotional upon witnessing a video of Afghan citizens attempting to flee their home.

Speaking about whether or not the UK should be starting a dialogue with the Taliban, Nick commented: “The question is, is our Afghan going to want to?

“Is the Taliban led Afghanistan going to want to become a rogue state that will antagonise the west again?

“Or do they want to try and step up and offer some degree of responsibility?

“I say again, only time will tell,” the journalist added.

Ruth moved the conversation over to Nicola, asking for her views on the current situation in Afghanistan.

The This Morning presenter said: “Some people don’t want to wait Nicola.

“We saw those scenes at Kabul airport, people desperate to get out of the country.”

When asked if enough was being done to help the people attempting to flee the country, Nicola replied: “No I don’t think it’s enough.

“Sorry I find it really difficult to watch the footage of that plane leaving Afghanistan,” she commented.

After taking a deep breath to compose herself, Nicola continued: “That’s, yes sorry, that’s just been one of the most disturbing things I think I’ve seen in quite a while.”

She went on to address the government’s new Afghan settlement scheme which aims to see up to 20,000 Afghans resettled in the UK.

However, Priti Patel confirmed on Wednesday morning the government will be aiming to resettle just 5,000 over the next year.

“What plans were in place here? They knew there was a possibility that things could go down in the way that they have.

“Dominic Rabb was on holiday. You know, they’ve only just called a meeting today to bring MPs to talk about this in parliament.

“What did they think was going to happen? I just don’t think our politicians had women and children in mind,” she concluded.

After her appearance on the show, Nicola took to Twitter to address her emotional response to the shocking footage.

She hit back at This Morning viewers who had accused her of having “crocodile tears”.

She tweeted: “I got emotional on This Morning watching the US plane take off from Kabul with men clinging to the wheels, heading to certain death. Then watching a female journalist plead for the safety of Afghan women. I’m no crocodile, just human.”

This Morning airs weekdays at 11:00am on ITV.