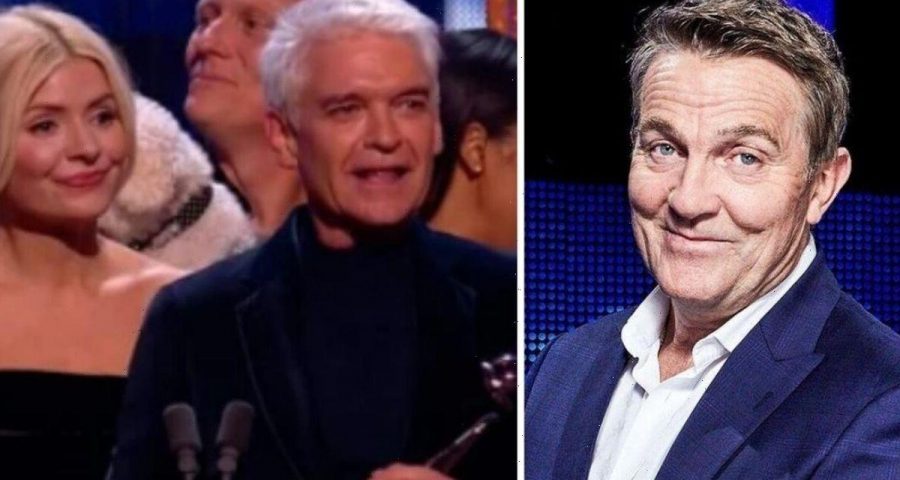 For the last six years, ITV magazine show This Morning has walked away with the TV Choice Award and was praised for its heartwarming stories and funny moments. However, on Monday evening, This Morning presenters Holly Willoughby and Phillip Schofield walked away empty-handed and it was ITV co-star Bradley Walsh who secured the win. His late afternoon quiz show The Chase proudly walked away with the award, making way for a new line of winners.

This year’s TV Choice Award saw some of the big names walk away with one of the biggest awards in TV.

Shows such as I’m A Celebrity… Get Me Out Of Here!, Strictly Come Dancing, and Call The Midwife, walked away with the prestigious award.

However, This Morning and its presenters Holly Willoughby and Phillip Schofield walked away from the awards empty-handed.

Instead, it was The Chase, Bradley Walsh and his team of Chasers that secured the win and scooped up the award.

The Chase debuted in 2008 with only Mark ‘The Beast’ Labbett and Shaun ‘The Dark Destroyer Wallace starring on the show.

Since then, Darragh ‘The Menace’ Ennis, Anne ‘The Governess’ Hegerty, Paul ‘The Sinnerman’ Sinha, and Jenny ‘The Vixen’ Ryan have joined the team of brain boxes.

There has also seen a spin-off series called Beat The Chasers, which sees the quiz champs compete as a team against one stand-alone contestant.

He said of the award: “I think I’ll just wing it, which is what will happen is I’ll just get on stage, collapse, and (they’ll) just drag me off.”

Other winners included I’m A Celebrity… Get Me Out Of Here! for Best Reality Show, Gogglebox/Celebrity Gogglebox for Best Entertainment Show, and Strictly Come Dancing for Best Talent Show.

Speaking on the show’s win, head judge Shirley Ballas said: “We love to win awards (on) Strictly… I think the show deserves it.”

Fellow judge Anton Du Beke added: “That’s the greatest (award)… you could have been voted for by the viewers, which is of course the reason why we make it.

“We hope that everyone is still enjoying it. We’ve been going for a while now and we’re loving doing it.”

It was ITV who came out on top with six awards for their shows this year, with BBC following closely behind with five.

Earlier this year, Holly and Phillip were at the forefront of British public outrage when they were accused of queue jumping to see the late Queen Elizabeth II lying in state.

After being photographed walking in through a separate entrance, a petition was started by members of the public to have them removed from the show.

The pair denied the accusations and explained that there was a separate entrance for the press which many other people had used.

This Morning airs weekdays from 10am on ITV.