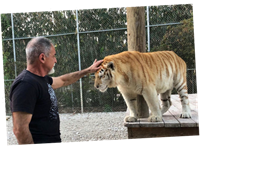 EXCLUSIVE: Mario Tabraue, one of the controversial characters in Netflix’s Tiger King and a drug trafficker widely hailed as the inspiration for Al Pacino’s Tony Montana in Scarface, is to be the subject of a limited drama series.

The Traveling Picture Show Company (TPSC), the company behind Bryan Bertino’s horror feature The Dark & The Wicked, has acquired Tabraue’s life rights and has teamed with Anonymous Content to develop the project.

Adam Penn, who has written on American Horror Story and Mr. Robot, is writing the series.

It will follow Tabraue’s life from his younger days through his drug trafficking and prison years all the way up to present day.

A Cuban American kingpin of a Miami drug empire, Tabraue spent more than a decade in prison on charges of racketeering and narcotics counts. During his trial, testimony alleged that he’d once attempted to dismember the corpse of a federal informant with a machete and used his exotic animal business Zoological Imports Unlimited as cover.

“The money coming in suitcases to the bank? I did that. But not with a fat guy in a van. It was a Corvette. I did it by myself,” Tabraue said in the Netflix docuseries, referencing the infamous scene in Brian De Palma’s 1983 film.

Tabraue now runs the Zoological Wildlife Foundation – hence his involvement in the breakout Netflix show – a not-for-profit organization designed to raise awareness of endangered species, which has a collection of animals including snow leopard and a liger.

TPSC, which recently wrapped comedy feature Unplugging with Eva Longoria and Matt Walsh and American Murderer starring Tom Pelphrey, Ryan Phillippe, Idina Menzel and Jacki Weaver, said that the team has spent months interviewing and working with Tabraue on his life story and the series will feature a “propulsive narrative equal to Mario’s remarkable life”.