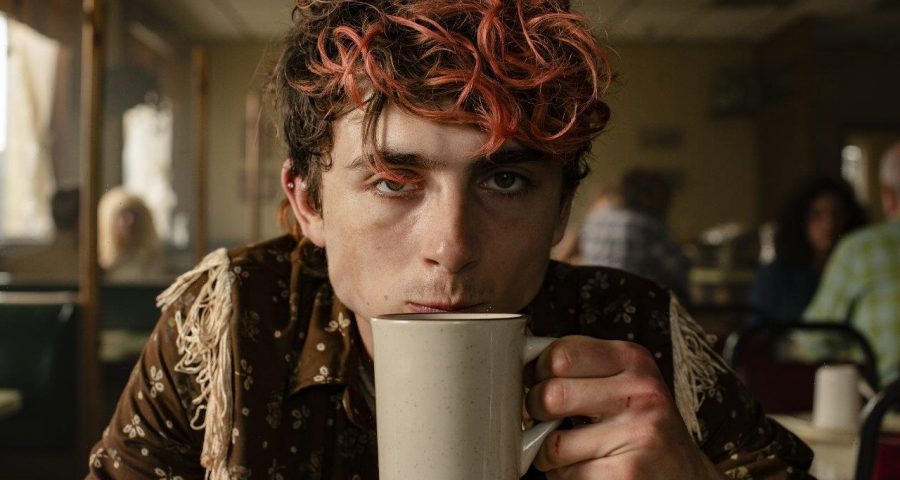 Taylor Russell, who stars opposite the ‘Dune’ star as his girlfriend in the coming-of-age romantic movie, reveals they actually ate cherries and chocolate while filming gory scenes.

AceShowbiz –Timothee Chalamet ate cherries and chocolate to make cannibal scenes in his new movie look realistic. The actor stars in new horror love story “Bones and All” alongside Taylor Russell and the actress has now opened up about the gory scenes in which their characters were depicted eating human flesh, revealing they were actually scoffing something much more palatable.

In an interview with Slashfilm.com, Taylor explained they were wolfing down a mixture of cherries and chocolate. She said, “On a very practical note, Luca [director Luca Guadagnino] said that we were eating corn syrup. But I know that I wasn’t, because I remember the incredible effects team and the team who were handling all of that sort of stuff told me that it was maraschino cherries, dark chocolate, and Fruit Roll-Ups. If that sounds good to you, cool. If it doesn’t, fair enough. But it was very sweet and [tastier] than anything else maybe you could imagine.”

The two actors play cannibalistic young lovers who embark on a road trip and they lead a starry cast which also includes Mark Rylance, Andre Holland and Chloe Sevigny. “Bones and All” is based on the 2015 novel of the same name by Camille DeAngelis and it premiered at the Venice Film Festival in Italy back in September. The film was awarded the Silver Lion prize for best direction during the festival and it’s due to hit cinemas on November 23.

It’s also proving to be a potential awards season contender after Taylor was nominated for the Outstanding Lead Performance prize at the Gotham Independent Film Awards while her co-star Mark Rylance got a nod for Outstanding Supporting Performance.