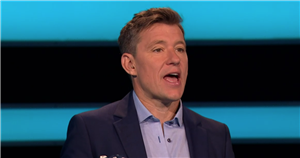 Tipping Point fans have shared their surprise at one player's uncanny resemblance to The Great British Bake Off judge, Prue Leith.

As Wendy answered the first question of the game, Tipping Point fans were quick to comment on her remarkable resemblance to Prue.

They later took to Twitter to share their surprise and make jokes about Wendy being the spitting image of the South African chef.

One viewer wrote: "If you ever needed a reminder that tonight’s #BakeOff night, just look at Wendy!"

Another confused fan commented: "I thought it was #TippingPoint but it's Bake Off with that old woman."

Meanwhile, another fan said: "Early doors for Wendy – just as well as it's Bake Off later."

"Wendy's off to do #GBBO," another viewer concluded.

Other Tipping Point viewers were left amused by Wendy's Pat-Butcher like dangly earrings, as she battled to stay in the game.

Despite her best efforts, Wendy was the first of Tuesday's Tipping Point players to leave the show.

Charlotte was the final contestant left standing but made a series of mistakes in the final round.

These included her mistaking the US university Facebook founder Mark Zuckerberg dropped out of as Yale instead of Harvard.

She also incorrectly answered with Ariana Grande's album Sweetener when asked to name the title of Selena Gomez's 2020 album Rare.

She later quit while she was ahead and walked away with an impressive prize of £,3500.

Tipping Point airs at 4pm on weekdays on ITV.