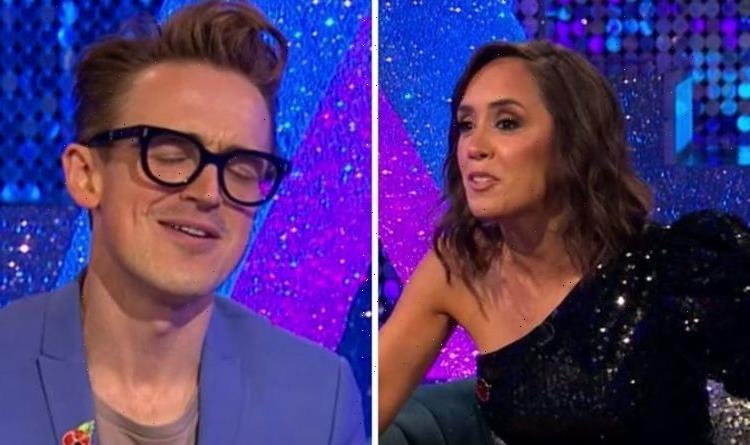 Strictly: Tom says he 'felt uncomfortable' during the Tango

McFly star Tom Fletcher and his dance partner Amy Dowden appeared on Thursday’s instalment of It Takes Two for a chat with host Janette Manrara. Tom admitted to Janette how “disappointed” he was about his performance on Strictly last week and even revealed he “felt uncomfortable” throughout the routine.

Tom, 36, and Amy, 31, performed the Tango dressed as devils for Halloween week.

Despite the couple having high hopes of impressing the judges, they ended up getting mixed reviews from the whole panel.

They appeared on Thursday’s instalment of It Takes Two on BBC Two where former Strictly pro Janette probed them about their feedback.

Janette asked: “Mixed emotions from that night, how did you feel about doing the Tango?”

A downtrodden Tom replied: “I was pretty disappointed afterwards as I just knew I could dance it better.

“I had such a fun week learning that dance, but this is just the way it goes.

“You only get one chance to dance on Strictly and it just didn’t go my way on the night.

“I just knew from the first few steps, as it just felt a bit uncomfortable, and we had a few little mishaps.”

The dad-of-three revealed his microphone pack came undone and Amy slipped over during their routine.

“It was just one thing after another, but I don’t want that to ruin that dancing experience for me,” Tom explained.

“Looking back I think it was amazing to get to Halloween Week and we looked awesome and it was so much fun.

“I know we could have danced it better, but you know, we are here for another week.”

He added: “It’s a show that I hopefully deserve to be in.”

Janette and Amy reassured Tom that he deserves his place in the competition before Amy told the star how talented she thought he was.

“Look, it was just a shame those little mishaps happened,” Amy said.

Tom and Amy both agreed they put their “all in” to the Tango and were looking forward to hitting the dancefloor this weekend.

Tom added: “It’s really challenging and I love that. I don’t want to come here and regret the dances that I do.

“I’ve learned an amazing Tango and it was really difficult, but I will always look back and be proud of that even though it didn’t go quite as well as we hoped. “

On Saturday the duo will dance the Paso Doble to Amparito Roca by Jamie Texidor.

Strictly Come Dancing airs Saturday on BBC One at 6.45pm.