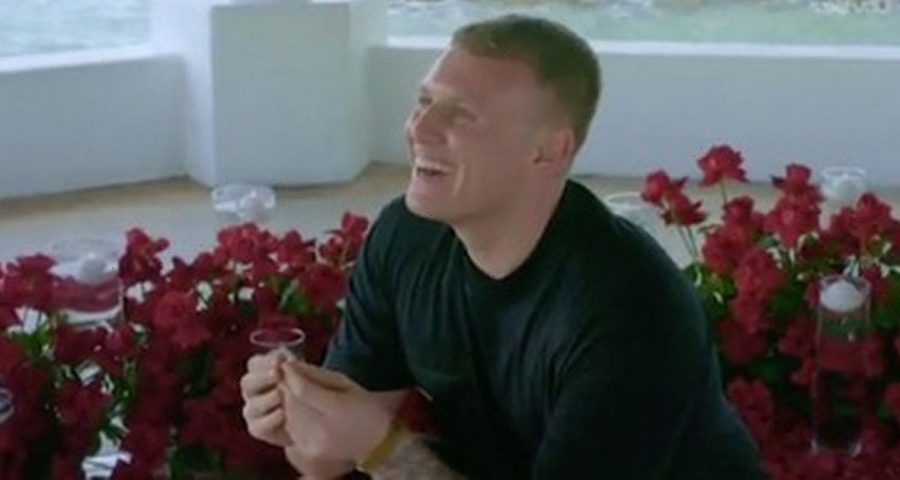 Tommy Mallet has revealed he took inspiration from Travis Barker's proposal to Kourtney Kardashian for his own engagement with Georgia Kousoulou.

Tommy, 29, and Georgia, 30, who share son Brody, 11 months, together, announced their engagement in February during a sun-soaked trip to Mexico.

And on Sunday night, the newly-engaged couple gave fans an unseen look at their romantic proposal on Sunday's Georgia & Tommy: Baby Steps.

Tommy cleverly decided to surprise Georgia by setting up a gorgeous proposal area complete with red roses, candles and Champagne, which all overlooked the ocean.

And after the proposal, he revealed that he took inspiration from Travis and Kourtney's engagement in October, which took place at a beach in Montecito, California, surrounded by red roses and candles.

Pointing at the red roses, Tommy said to Georgia: "Do you know where I got this from? Kourtney Kardashian!

"One of the girls in work showed me the picture and I was like: 'Boom, save that!'"

And that wasn't the only surprise as prior to the proposal Tommy pretended to Georgia that production needed "nice photos" of them for Baby Steps as they posed in the scene for sweet family snaps.

To which Tommy then suddenly got down on one knee as Georgia, who was holding son Brody, was left gobsmacked as he said: "You're the best thing that's ever happened to me and you're the best mum! Will you marry me?"

Georgia was left speechless as she asked: "Is this a joke, what? Oh my God, are you joking? Yes!"

Tommy was then left further delighted when he realised that the engagement ring fitted perfectly as Georgia started to get teary as she admitted: "My eyes are stinging! I'm in shock, I don't know what to say…"

Speaking in a VT, she admitted: "Wow, it was a blur, don't even remember much apart from: 'Are you joking?' He actually caught me off guard!"

Georgia then excitedly FaceTimed her family to share them the good news as she sweetly declared: "Tommy has made me the happiest girl in the world!"

Viewers were left emotional over the scenes as they took to Twitter to share their thoughts with one fan writing: "@MissGeorgiakx omg started crying at the proposal #Congratulations #georgiaandtommy #babysteps."

Another fan wrote: "So excited and happy for you both, made me cry."

While a different viewer added: 'Absolutely the most lovely family so natural so down to earth #babysteps."

For updates on all your favourite celebs and TV shows, sign up to our daily newsletter here .