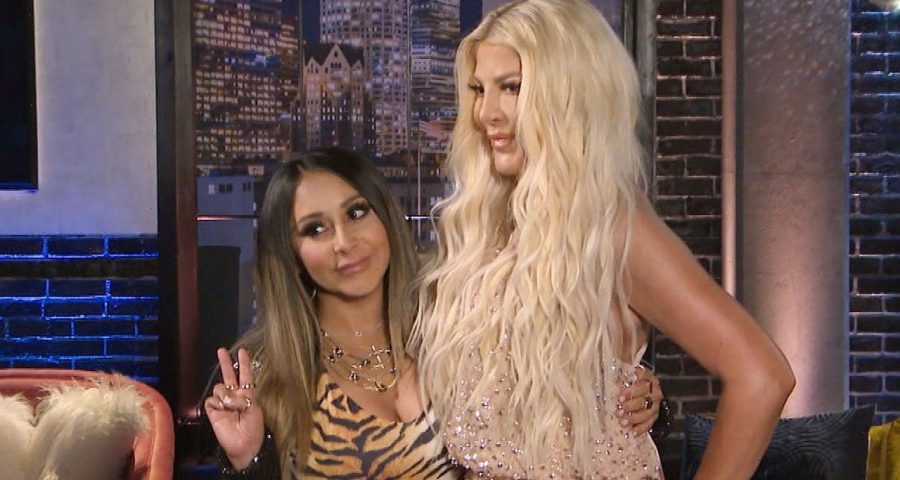 Nicole “Snooki” Polizzi and Tori Spelling are shying away from their messy pasts. In fact, with their new MTV series Messyness, the pair are reveling in all the wild craziness that got them to where they are today.

“I didn’t realize that before I started the show that we’ve all been messes at some point, basically,” Spelling recently told ET’s Lauren Zima. “And we are now commenting on other people’s messes, while keeping it messy ourselves of course.”

Spelling is one of several panelists on the new show, alongside Adam Rippon, Teddy Ray and host Snooki. As a spinoff of the Rob Dydrek hosted MTV series Ridiculousness, Messyness has Snooki, Spelling, Rippon and Ray dishing on their own tales of past messy behavior and quasi-scandal, while also commenting and poking fun at others’ in the form of viral videos and internet posts.

“I would say my best mess moments have luckily not been captured on camera,” Spelling, 48, said, reflecting on her own past. “Because that would be crazy. But definitely, if you’re waiting for some mess stories, I tell a lot of Tori stories from over the years. I’ve seen a lot in the last 30 years.”

Spelling also has advice for anyone navigating any messes of their own: “Own it.”

“Then you take back your power,” she said. “Accountability is everything, because then people shut up because you owned it. Take back the power. ‘Yeah I did that. Mhm, next.'”

Snooki — who is famously no stranger to messiness herself, as seen in so many iconic episodes of Jersey Shore — echoed Spelling’s advice when it comes to handling high-profile messes.

The pair are both on the same wavelength when it came to how messy people should be throughout their lives, and said it’s important to just have fun, without worrying too much about judgement.

“Life’s too short to be too serious, right? So I feel like you have to be a little authentic. And if you like to have fun and you kind of own your stuff when it happens … and you go on to do better things and evolve,” Spelling said. “Yu don’t want to be too messy, I mean, between being too messy and not, always being able to reel it back [is important] I think. Like if you make one little mess the next time you’ve got to be on it.”

For Snooki, being a mom hasn’t kept her from enjoying life — and occasionally overindulging.

“You just need to have priorities,” she shared. “So, like, don’t be a mess when you’re trying to take care of your kids. But when I’m away from my kids, I’m a slob …  that’s what makes you a good mom, is you let loose once in a while.”

The reality show icon is mother to three kids — 8-year-old Lorenzo, 6-year-old Giovanna and 2-year-old Angelo — and she says she’s “actually very excited to show my kids me being a mess on Jersey Shore.”

“It’s like, ‘Look at mommy! Please don’t act like me, be a better human being and responsible.’ But I feel like my daughter is a spitting image of me, so I’m in trouble,” she said. “I’m excited but also terrified.”

Spelling says she’s also really honest with her kids about her past, including her various trials and tribulations.

“I’m very real with my kids. I don’t try and sugar coat it,” said Spelling, who shares five children with husband Dean McDermott. “I’m happy to tell them about my situations and what not to do, if that can help them.”

As for the new series, it’ll be a chance for the two TV stars to revel in life’s funniest, messiest moments and Snooki says she “cannot wait” for everyone to see it.

“It’s gonna be insane!” she said. “This is like a dream job, honestly. This is like the happiest I’ve ever been.”

Messyness comes to MTV on Aug. 23.