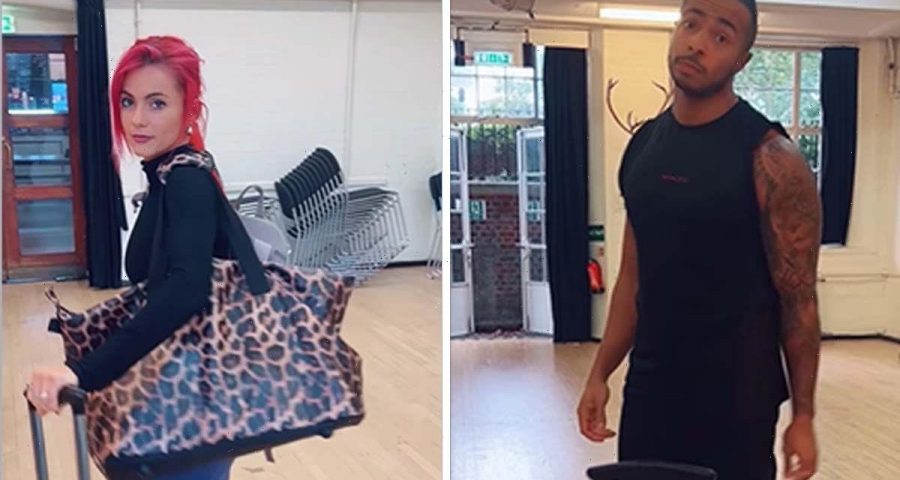 Tyler West jokingly called off rehearsals this week after a humorous moment with his partner Dianne Buswell. The Strictly Come Dancing pair left the studio separately after the pro dancer broke wind during their dance routine.

The Kiss FM DJ was stopped in his tracks during a lift to his partner Dianne, as they ran through the vital last moments of their routine.

Unfortunately, as he attempted the move, Dianne loudly let off some gas, much to the surprise of her co-star Tyler.

He shared the moment on Instagram with his 66,000 followers, announcing: “Unfortunately rehearsals had to be cut short today.”

As well as the clip of the routine, he also posted a small sequence of videos hilariously showing him booting Dianne out the door.

The guilty-looking dancer sheepishly accepted the suitcase passed to her by Tyler as he gestured for her to leave.

The cheeky DJ added a wind emoji to the caption of the video which left his Strictly colleagues in stitches.

The rest of his fans were also in hysterics and mercilessly poked fun at Dianne’s misfortune.

The pair were practicing ahead of their Tango to the iconic theme song of Doctor Who on Saturday night.

They will be dancing to the theme song as part of the BBC’s 100-year celebrations, with every dance routine set to the soundtrack of an iconic theme from the network.

Tyler and Dianne have impressed the judges so far with an array of stellar scores.

However, Dancing With The Stars expert Gary Edwards has revealed his concerns over the progress of the duo.

He told Express.co.uk: “With them, they hit the high quite early and I didn’t find [their last dance] anywhere near the best on the night.

“It didn’t light my fire at all, I was disappointed as I thought it was going to be much better.

“Technically he’s pretty good, he’s got his balance in the right place but beyond that, it’s what makes a champion?

Gareth continued: “A lot of people, some of the best dancers who have ever lived, they wouldn’t even make Blackpool because they didn’t have the performance level, they were just great technical dancers.

“We have our bible with techniques in but if you just follow that technique, you wouldn’t win anything.”

Strictly Come Dancing airs Saturday at 6.30pm on BBC One and BBC iPlayer