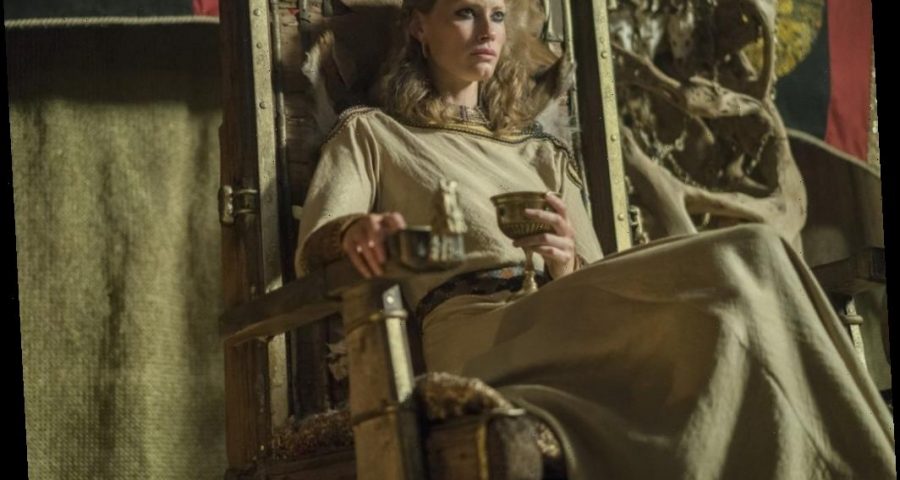 In the hit series Vikings, there are several main characters, and one of those is Princess Aslaug (Alyssa Sutherland). She’s a princess from Götaland that meets Ragnar Lothbrok (Travis Fimmel) in season 1. Her parents are quite famous to the Vikings – her father, Sigurd, who supposedly killed a dragon, and her mother, who was a famous shield-maiden named Brunhilde.

What actually happens to Aslaug in the series? We have all the details you need to know.

Aslaug meets the main character of the series, Ragnar, in season 1, when he takes care of some business between King Horik (Donal Logue) and Jarl Borg (Thorbjørn Harr) in Götaland. They end up sleeping together, and she gets pregnant. Ragnar has a wife at the time named Lagertha (Katheryn Winnick), and Aslaug comes calling while very pregnant.

She’s smart, and she plays the game well. When Ragnar suggests they have two marriages and that he marry Aslaug, she goes along with it like it’s a good idea. Lagertha, on the other hand, isn’t having it, and she divorces Ragnar and leaves him. Aslaug ends up getting exactly what she wanted, and she becomes Ragnar’s wife. She goes on to give him four sons – Ubbe (Jordan Patrick Smith), Hvitserk (Marco Ilsø), Sigurd (David Lindström), and Ivar (Alex Høgh Andersen).

Aslaug goes from an Earl’s wife to Queen

When Ragnar kills King Horik after he attempts to kill him and his family, Aslaug becomes the Queen of Kattegat when Ragnar is proclaimed the King. She enjoys the power, and even asks the Seer (John Kavanagh) if a woman will be Queen of Kattegat after Ragnar’s death. She learns there will be a Queen, and she assumes it’s her.

But Ragnar and Aslaug have problems in their marriage. There is jealousy, and feelings seem to disappear over the years. Aslaug even wants Ragnar to be preoccupied with other things so she can be left alone to rule.

When Ragnar disappears after a failed attempt at raiding Paris, Aslaug rules by herself for many years as the sole person in charge. But Ragnar eventually returns and heads for England, where he plans to die to get revenge for the destroyed settlement in Wessex. This all prompts Lagertha to finally make a move that she’s been waiting to make for a long time.

Lagertha has already told Aslaug that she can’t forgive her for taking away everything she had. She also added that Aslaug would never be the real Queen of Kattegat.

In season 4B, episode 4, while Ragnar is gone and other warriors have left with her son by Ragnar, Bjorn Ironside (Alexander Ludwig), Lagertha and her warriors invade Kattegat. Lagertha has long since been the Earl of Hedeby, but she’s dreamt of taking her real home of Kattegat back, and she finally does.

Aslaug meets Lagertha, who accuses her of being a “witch.” Aslaug goes on to say that both Ragnar and her son, Ivar, are dead based on a dream she had, as she believes that she can see things. Aslaug holds out the Sword of Kings, which she drops to the ground, saying she’d “never win” in a fight against Lagertha.

“But still, I have fulfilled my destiny,” Aslaug tells her. “The gods foretold Ragnar would have many sons. And I have given him those sons. I am as much a part of his saga, Lagertha, as you are.”

Aslaug goes on to say that she is renouncing “everything.” “All I ask is safe passage,” she continues. “All I ask is that you let me leave here in peace, to go wherever the gods decide. And you shall have back your hearth and home, with my blessing. And my sons, when they hear how it was done, will be grateful for the manner of it, and not seek revenge.”

Ubbe and Sigurd are actually being detained in Hedeby, and Lagertha plans to spare all of the sons of Ragnar. Hvitserk is with Bjorn raiding and exploring, and Ivar is with his father.

How did Aslaug die in ‘Vikings’?

Lagertha steps out of the way saying she understands, and Aslaug thanks her, turning to leave, but she only gets so far. Lagertha shoots her with an arrow, killing her in front of everyone in Kattegat. Aslaug smiles as she falls to the floor and dies. Lagertha gives her a lavish burial fit for a Queen, but she takes her place as the Queen of Kattegat.

Aslaug is killed in season 4B of Vikings at the hands of Lagertha, who wanted to take her home back for a long time. It’s a sad end of her story, but she did fulfill her “destiny,” as she said, since she gave Ragnar his many sons.