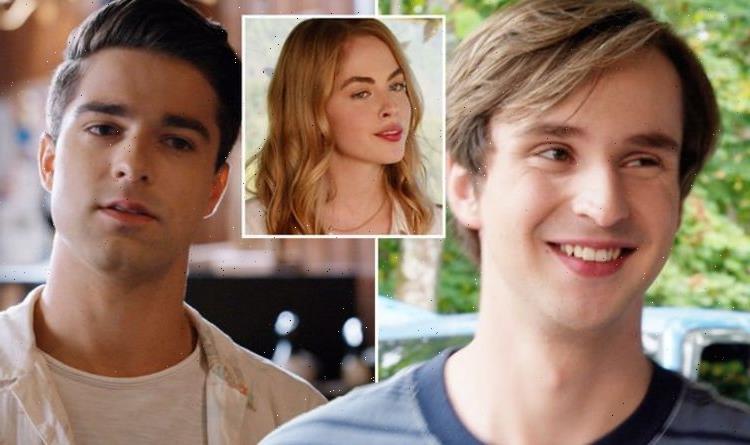 As soon as she stepped into Virgin River during the second season, Lizzie (played by Sarah Dugdale) caught Ricky’s (Grayson Gurnsey) eye and the pair have been on somewhat of a rollercoaster romance ever since. However, season three threw a number of challenges their way and heading into the fourth – if renewed by Netflix – the two appear to be at breaking point. With Lizzie’s ex Parker (Markian Tarasiuk) now in the frame and desperate to win his former partner back, could Ricky turn his attention to another character to be introduced in the next season?

The theory stems from the state of Lizzie and Ricky’s current relationship status and a key quote Parker said to his ex when trying to win her back in the season three finale.

Lizzie was left heartbroken in season three to learn her boyfriend had kept his the training and progress he’d made towards becoming a marine hidden from her.

With Ricky determined to follow his career path, he failed to commit to a future in Virgin River, unsure if he was going to be stationed or required to move elsewhere.

Coinciding with Lizzie’s ex Parker arriving into town, Ricky and Lizzie looked all but over.

And as Parker continued to try and chip away at their romance, the finale of Virgin River season three appeared to show he’d made headway with his ex.

After Ricky tried to win her back after lying to her about the marines, he was devastated to hear her say she “loved” him in a past tense.

Parker then arrived to disrupt their conversation as Ricky protested: “Lizzie, I know I screwed up but…”

“You live your life and I’ll live mine,” Lizzie brutally said to the teenager – seemingly bringing their dalliance to a close.

Later on, Parker and Lizzie shared a drink in her bedroom as the season three newcomer tried to convince his ex to move back to LA with him.

“It’s too expensive to get my own place and I don’t wanna live with my parents,” Lizzie told Parker but he didn’t stop there as he brought up the idea of going traveling together.

But Lizzie insisted they wouldn’t be rekindling their romance, prompting Parker to admit: “I know I screwed up. I never should’ve hooked up with Olivia.”

“So now you regret sleeping with her?” Lizzie probed as Parker continued to grovel and when he dropped the L-bomb on her, Lizzie had no answer as to what was keeping her in Virgin River.

Given Virgin River’s history of bringing in newcomers from characters’ pasts to disrupt things, it’s not unlikely the aforementioned Olivia could come into play.

After all, why would the writers and Parker have made a point of saying her name? By doing so it opens the door for Olivia to make an appearance.

And given Parker fled to Virgin River to try and win Lizzie back, who’s to say Olivia wouldn’t do the same for him?

However, with Lizzie and Parker looking like they’re beginning to patch things up, it could be Olivia and Ricky are left single while their exes rekindle their romance and head on their road trip.

In season four, Olivia could therefore find herself needing somewhere or someone to turn to – enter Ricky.

With the two reeling from Parker and Lizzie getting back together, they’d share common ground and chemistry could well ensue.

Plus if Parker and Lizzie do get back together, who’s to say Ricky won’t want to give his ex a taste of her own medicine by hooking up with someone from her past?

So with Parker and Lizzie’s seeming reconciliation, Ricky looking like he’s blown it, and Parker mentioning Olivia out of nowhere, season four may well just deliver on yet another intriguing romance plot.

Virgin River seasons 1-3 are available to stream on Netflix now.