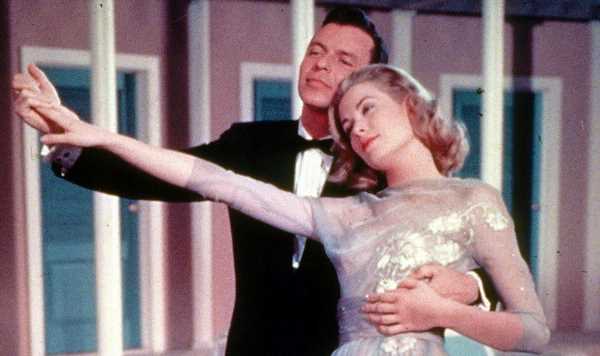 Sinatra is back on TV today in HIgh Society with Grace Kelly. He didn’t necessarily look like a teen idol (girls were screaming at his concert long before Elvis) or matinée idol, yet his success with women was staggering. Fame and fortune certainly go a long way, as did that extraordinary voice. Of course, he also possessed a pair of piercing peepers. Actress and close friend Ruta Lee described the extraordinary power they had on women: “Those fabulous blue eyes of Frank Sinatra were so piercing. When he was with you, those blue eyes stayed with you, you felt like he was entering your soul. It was something incredible.” However, the star also had another impressive and infamous hidden asset.

The star married first wife Nancy in 1939 but by the early 1940s was already notorious for his conquests in his early big band days. Bandleader Tommy Dorsey remembered: “He was no matinée idol. He was a skinny kid with big ears. Yet what he did to women was something awful.”

As his film career also began to flourish, Sinatra began to bed a succession of starlets and major Silver Screen goddesses from Lana Turner and Angie Dickinson to Marilyn Monroe and Judy Garland.

Sinatra told his friend, Joey D’Orazio. “I can have every dame I want. I just can’t help myself. I don’t want to hurt Nancy. I just don’t want to sleep with her no more.”

In the first year of his marriage to Nancy, Sinatra had already installed his first mistress, actress Alora Gooding, in an apartment, but certainly didn’t limit his conquests to her.

Band pianist Joe Bushkin said: “Whenever he could take a shot at a woman, he would.”

Saxophonist Harry Schuchman added: “He had more broads around than you ever saw. I used to sit there and watch the gals with Frank and think, ‘What do they see in him? He’s such a skinny little guy.'”

Apparently, it turns out the crooner was packing more than charm and twinkling blue eyes.

Sinatra’s friend and actor Gianni Russo said: “He was just a womaniser. How can I say this politely? He was well-endowed, so he didn’t leave these women wanting anything.”

The idol’s valet George Jacobs revealed in his book Mr S that his boss actually had special underwear made to contain and conceal his size in public.

Most Hollywood affairs typically only last during a film shoot and theirs had started badly when he turned up drunk for their first date, apparently because he was so nervous.

However, in True Grace: The Life And Times Of An American Princess, Hollywood biographer Wendy Leigh claimed her ongoing marital affairs were a direct reaction to her husband’s own indiscretions, sending her back to Sinatra and even Brando.

“I know my husband has affairs with other women,” Grace once confided to her hairdresser. “That’s very frustrating to me and makes me very unhappy.”

Leigh claimed that Sinatra and Princess Grace’s renewed dalliance lasted for years and they met at a secret, secluded French villa in Cap Ferrat, just along the coast from her husband’s Principality of Monaco.