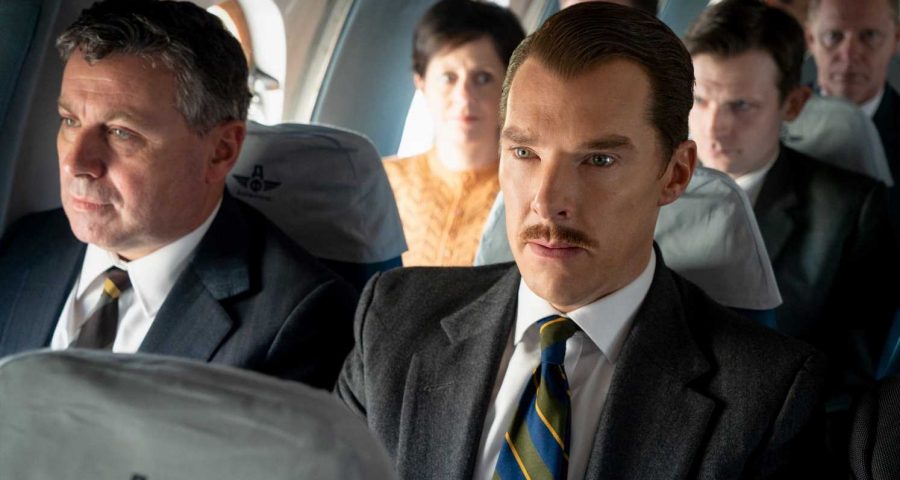 Movie theaters are slowly reopening for the summer season, but new streaming films are still coming home to entertain you and your family during socially distanced times.

This weekend, Benedict Cumberbatch and Rachel Brosnahan co-star in a historical thriller surrounding the Cuban Missile Crisis, Steven Spielberg’s son Sawyer Spielberg has his first lead film role in a backwoods horror flick, and Marvel mainstay Sebastian Stan (currently starring in Disney’s “The Falcon and the Winter Soldier”) goes from superheroes to love at first sight in a romance co-starring Denise Gough.

If you’re planning to return to your local theater, writer/director Ben Wheatley’s “In the Earth” is a folk/sci-fi horror about a scientist (Joel Fry) and park ranger (Ellora Torchia) who venture into a forest to find a research site and run into a trippy and terrifying situation.

But if you’d rather stick closer to home, here’s a rundown of new movies hitting streaming and on-demand platforms this weekend, for every cinematic taste:

Benedict Cumberbatch plays a British businessman who gets involved in Cold War-era spycraft in the thriller "The Courier." (Photo: LIAM DANIEL/LIONSGATE)

If you could use a history lesson: ‘The Courier’

The solid spy thriller pulls from the real-life events of British businessman Greville Wynne (Cumberbatch), who’s recruited by his government and an American CIA agent (Rachel Brosnahan) in 1960 during the Cold War to cultivate Oleg, a high-placed Soviet source (Merab Ninidze). Familiar secret-agent shenanigans abound but more interesting is the relationship that grows between Greville and Oleg, as well as the effect that being a spy has on Greville’s home life with his wife (Jessie Buckley) as America and the Soviets careen toward the Cuban Missile Crisis.

If you never want to eat meat again: ‘Honeydew’

There’s a mix of “Hansel & Gretel” and “The Texas Chain Saw Massacre” with this rural, gory thriller about a young couple (Sawyer Spielberg and Malin Barr) whose car breaks down and they find shelter and a warm, home-cooked meal in the house of a strange old lady (Barbara Kingsley). However, the cuisine here is deeply disturbing, there’s a celebrity cameo that you have to see to believe, and Kingsley proves to be a memorably creepy antagonist in a film that’ll leave you pretty shook (in a good way!).

Meet Sawyer Spielberg: Steven Spielberg’s son is taking a bite out of Hollywood with ‘Honeydew’

Chloe (Denise Gough) and Mickey (Sebastian) are two Americans living in Greece who fall hard for each other in the romance "Monday." (Photo: IFC FILMS)

If you dig both big love and relationship turmoil: ‘Monday’

One party-hearty night, two Americans – DJ Mickey (Stan) and lawyer Chloe (Gough) hook up in Greece before she’s about to head home and quickly fall in love. The drama follows the ups and downs that follow, from many bad decisions (including a nude ride through Athens and sex in the back of a moving van) to what happens when they really get to know each other. While there are some fun bits, and the leads are decent, it’s a whole bunch of carnal pleasures interspersed with almost every romantic-movie cliche.

If you’re not familiar with the awesome Barbara Crampton: ‘Jakob’s Wife’

A longtime icon in horror circles, Crampton’s the highlight of this throwback chiller with an absurdist bite. The spouse of small-town minister Jakob (Larry Fessenden), Anne (Crampton) feels stuck in a 30-year marriage when a run-in with a vampire turns her into a ghoul, too, but also gives Anne a new sense of power and ownership over her life. As the big bad vamp’s presence becomes more dangerous, Anne and Jakob finally begin to work on their relationship in a movie about understanding as well as bloody mayhem.

A young girl (Anya McKenna-Bruce) doesn't know what to do when three creepy hooded figures show up in her room in "The Banishing." (Photo: SHUDDER)

If you adore freaky period horror films: ‘The Banishing’

In an ambitious take on the haunted-house movie, the 1930s-set film stars Jessica Brown Findlay as a wife and mother who relocates to a new English town when her husband (John Heffernan) gets a gig as a preacher. The family moves into the manor where the last holy man disappeared, and dark secrets abound in this unholy place that begin to take hold of their daughter. There’s a lot going on – from time loops to a trio of terrifying monks to Nazis – but it’s not bad and does ratchet up some historical scares.