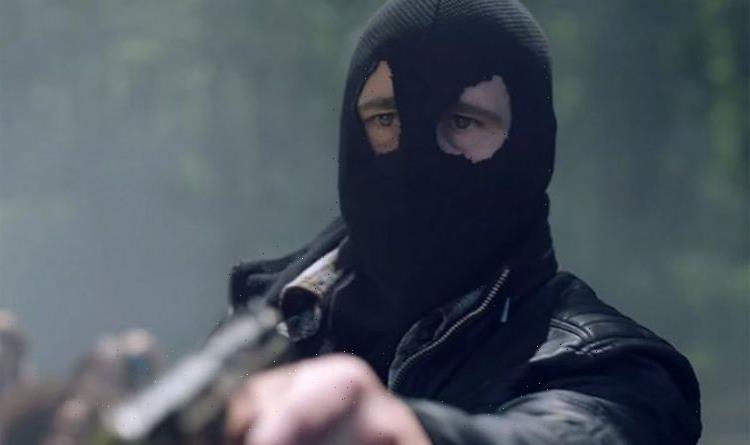 Riverdale: The CW release teaser for episode "Fire in the Sky"

Riverdale fans will remember the ongoing terror of The Black Hood, one of the town’s most elusive villains that never quite went away. Often working in the shadows and appearing when least expected, the identity of the character remained a mystery for years on the Netflix series. But who really was the man behind the mask?

Who is The Black Hood in Riverdale?

The Black Hood preyed upon the town of Riverdale throughout the second season of the series, causing most of the show’s pain and suffering.

The identity of the character played on fan’s minds for years, with various twists and turns that kept evading the ultimate reveal.

Some of his crimes included the shooting of Fred Andrews (Luke Perry) and the murder of Geraldine Grundy (Sarah Habel), to name but a few.

Ultimately, the killer behind the mask was revealed to be Hal Cooper (Lochlyn Munro), who unveiled himself after the town believed Joseph Svenson (Cameron McDonald) was behind the killings.

It was revealed that Joseph was merely Hal’s pawn and that Hal had orchestrated all the crimes that haunted the town.

Hal explained that he blackmailed Joseph into doing his bidding, but he was in fact the true Black Hood.

He explains that his father was the Riverdale Reaper, another menace to the town’s storied history.

Hal justified his actions by convincing himself that the town was full of sinners and therefore they needed to be purged.

He wanted to keep a promise he made to his mother that Riverdale will ‘do better’, so he took matters into his own twisted hands.

However, following his confession, the Black Hood killings didn’t stop and the town soon realised they had a copycat killer on the loose.

The second Black Hood attacked the town hall while Hal and his family were there, confirming it wasn’t still him.

This new Black Hood attempted to kill Fred Andrews and was soon apprehended.

Tall Boy (Scott McNeil) was revealed to be the second Black Hood and was hired by Hiram Lodge who wanted to stop Fred’s mayoral campaign.

True to form, Riverdale didn’t quieten down after Black Hood’s rampage, with new and disturbing villains emerging each season.

Season six is set for release on November 17, 2021, and will continue to showcase the towns waking terrors.

Riverdale is also part of the larger Archieverse, a franchise based on the characters from Archie Comic Publications.

The other shows in this universe are Chilling Adventures of Sabrina and Katy Keene, both dealing with their own villains.

Fans are still reeling from the aftermath of The Black Hood arc, with many of them debating the character’s impact on the series.

One fan said: “Forgot how intense The Black Hood part of @CW_Riverdale was.”

“I feel bad for Betty because she didn’t get into her dream school because of The Black Hood,” noted another.

A third pointed out: “I love how in Riverdale they couldn’t figure out who The Black Hood was for the longest time even though it was so simple even I knew before they did!”

Riverdale is available to watch exclusively on Netflix.