Yes, it is about people building things with small coloured plastic bricks. But who would’ve guessed that Lego Masters would be so visually exciting or so suspenseful? Adapted from an English format, the show has arrived on our screens with a burst of colour and good humour, and it’s been greeted by impressive ratings that have climbed over the “magic million” mark nationally.

It’s a contest with all the familiar ingredients: a host, a judge, contestants and tasks that must be completed within prescribed time periods. The designated deadlines are designed to apply pressure and, somewhat surprisingly, it has emerged that, for this competition, 12 hours might not be a generous amount of time for a “build” (that’s the technical term). 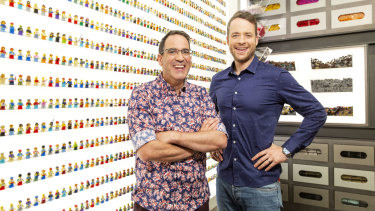 Following the early rounds, there have been eliminations as those deemed to have produced the least impressive offerings are thanked for their contributions and sent packing. Often, an exit is accompanied by tears and, in this show, endearingly, the tears haven’t only come from the contestants.

As years of intensive exposure to reality TV competitions has shown us, the results of this customary mix of basic elements can vary wildly, from compelling and accomplished to tacky and odious. Lego Masters has pleasingly nailed the formula. And because it is about Lego – not food or renovations or singing or dancing or dating or eating insects in the African jungle – it feels fresh.

In terms of the basics, the series has the perfect host in Hamish Blake, who’s funny, friendly and warm, and has the charming capacity to send up the role as he’s playing it. He has a perfectly cast companion in Ryan “Brickman” McNaught, who, we are told early, often and with reverence, is one of only 14 certified professional Lego builders in the world, and the only one in the southern hemisphere. The added bonus is that he is a calm and congenial presence on set and a great asset to the show: even-tempered and appreciative yet exacting.

So when he tells the eager competitors and viewers about his criteria for assessment, it sounds like the law coming down from the mountain and is regarded on-set with comparable deference: “I’m looking for creativity, for your stories to come out in these builds, as well, of course, as your technical abilities.”

The contestants are busting to impress this master and viewers become keen to see what they can come up with and how he will assess it. And, honestly, how many judges get teary when they have to execute their first elimination, as Brickman did? It was adorable. 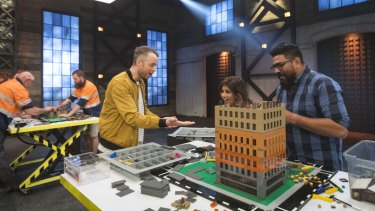 Block party: On the set of Lego Masters

The show has also made use of reality TV tropes, such as the golden brick, which functions as an immunity talisman. To an extent, it also has its own language and the uninitiated can learn nifty acronyms such as SNOT (studs not on top) and NPU (nice part usage).

The casting of the contestants has been canny. Playing in pairs – husband and wife, grandmother and grandson, friends, mates, colleagues – they’re all enthusiasts and their passion for Lego construction is palpable and infectious. The mood in the room once that metal roll-a-door rises and they all rush to their tables – because contestants on reality TV shows are always in a hurry – is positive and supportive. As in MasterChef – but not My Kitchen Rules – these people cheer each other on. While they’re all keen to do well, they’re admiring of each other’s achievements. And, as with MasterChef, that spirit bathes the production in a rosy glow.

Seeing the players rush excitedly to the Brick Pit, with its two and a half million pieces and myriad construction options, is like watching the proverbial kids in a candy store. That too is comparable to the MasterChef pantry, representing the wonder of a colourful Aladdin’s Cave with all sorts of possibilities being unlocked. And many of the builds that we’ve seen so far have been nothing short of extraordinary in terms of both conception and the level of detail on proud display. 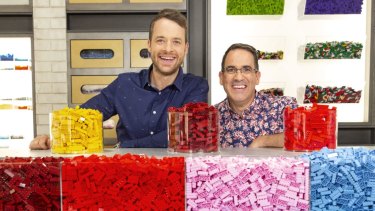 Hamish Blake and Ryan McNaught, on the set of Lego Masters.Credit:NINE

As for the teams, it’s been a delight to see teenager Matt playing with his grandmother, Lyn. Early on, Lyn expressed some concern about her abilities: “My biggest worry is that I don’t let Matt down,” she fretted. “I’m not sure that I’m meant to be here.” The happy bonus for them, and for viewers, was that the confession of doubt came just before they emerged as triumphant winners of an early round.

If Lego Masters has the kind of villain who’s become a familiar figure in reality TV shows, it’s cocky Kale. A self-proclaimed artist with an oily smirk and a substantial social-media following, his Achilles heel has been his inability to work as a team player. He reduced his partner Bilsy to a subservient worker-bee role, or separated their endeavours entirely in an effort to showcase his own ingenuity. In this world, though, hubris can be a stumbling block, and it’s certainly not a trait that escapes the eagle eye of Brickman.

Scheduled to run for a compact nine-part season, with three episodes packed into consecutive nights for three weeks, Lego Masters has made a Ninja Warrior-style splash for Nine. The sensibly short-and-sweet timeframe allows no opportunity for the shiny novelty to wear off, or for the challenges to become stale and repetitive before the May 14 finale.

All in all, what’s not to like? Here’s a series that’s been cleverly constructed around an enduringly popular universal toy that encourages imagination, creativity and active engagement. No screens in sight, no batteries required.

It’s family entertainment in the best possible sense, although, as demonstrated by the enthusiasts competing here, children aren’t a prerequisite either.