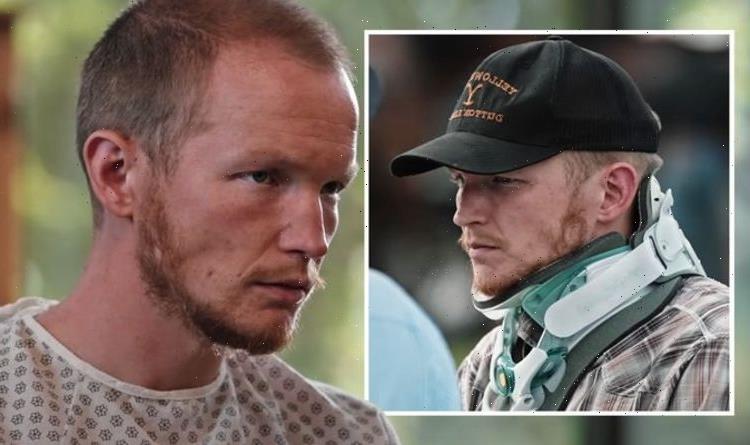 Inside the Bunkhouse: Why Jimmy defied John Dutton

Paramount viewers were left over the moon during the Yellowstone season four double-bill premiere to discover the likes of John Dutton (played by Kevin Costner), Beth Dutton (Kelly Reilly), Kayce Dutton (Luke Grimes) and Jimmy Hurdstrom (Jefferson White) had lived to fight another day. All four had been left in perilous situations in the third season finale but none were ready to meet their maker just yet. However, Jimmy’s return to the hospital was rather self-inflicted, defying John’s pleas to give up rodeoing and instead jumping back on the horse following words of encouragement from girlfriend Mia (Eden Brolin).

Before season four rolled around, Jimmy – who was still recovering from a previous fall – was underprepared and flung from the back of a horse, leaving him with his life hanging in the balance.

Season four opened to reveal Jimmy had survived the fall, although would need intense physical therapy to recover once again.

But this time around, things were very different when he returned to Yellowstone ranch – none least because John now seemed ready to wash his hands of the disobedient rodeo wannabe.

John had agreed to cover Jimmy’s medical bills and aid his recovery the first time around on the basis that the rancher would give up rodeo once and for all.

However, enamoured by rodeo fan Mia and with her pleas for him to be his own man ringing in his ears, Jimmy took the fateful decision to return to horseback with bone-crushing consequences.

Now in season four, John has told Jimmy in no uncertain terms he doesn’t want the burden of Jimmy upon him, telling him on his return: “How can you be useful?

“You can’t ride, you can’t lift anything, but in a few months you will and you’ll think you’ll have cheating fate all figured out and you’ll do it again, and I won’t watch it happen,” John warned him.

Despite Jimmy’s pleas, John appeared unwavering, suggesting Jimmy’s time with the Duttons may be done once and for all.

So why would Jimmy not only risk his life but his alliance with one of Montana’s most powerful and deadly families?

Speaking on Paramount’s Stories from the Bunkhouse, actor White sat down with co-stars Ian Bohen and Denim Richards to explain.

‘Twice in season three, Jimmy falls off a horse and an episode ends with Jimmy crumpled up on the ground,” he began. “Jimmy falling off the horse in 310, hugely important for me (but) in the grand scheme of things, not the most important thing that happens.”

Bohen asked: “How did it feel then when you read it and you knew that you survived?”

“It felt great,” White admitted. “But it was always a sort of a mixed blessing because I’m worried about Jimmy!

“My first thought was, ‘Oh, great. John Dutton’s alive, love that. Beth’s alive, what a treat. Kayce’s alive…’ I was never that worried about Kayce, nothing’s taking Kayce down short of a nuclear explosion.

“Jimmy, I was like ‘damn’, because I’m in the hospital, maybe paralysed. Jimmy, when he got back on that horse, he defied John Dutton.”

Richards then probed: “Was he doing that in defiance of John Dutton or was he doing it to prove to Mia that I’m a stand-alone man and that I can kind of think for myself? Both of those things are kind of in play.”

“I think he was doing it for himself,” White explained. “He’s always getting buffeted around by these powerful other forces.”

Bohen wasn’t convinced, however, thinking Mia was behind Jimmy’s thought process as he added: “If she hadn’t been there to influence him, without her, I think he wouldn’t have (got on the horse).”

But White protested: “It’s the first time in his life he’s felt proud. His whole life, he’s been a f**k-up. When it’s rodeo, like in the arena, nobody thinks about that twice.

“All that matters is the seconds that he’s on that horse. Jimmy’s trying so hard to even just have hope, that moment when he sees John Dutton, the world outside of that physical therapy room comes crashing back into the picture.”

Yellowstone season 4 continues Sunday on Paramount Network in the USA. A UK release date is yet to be announced.