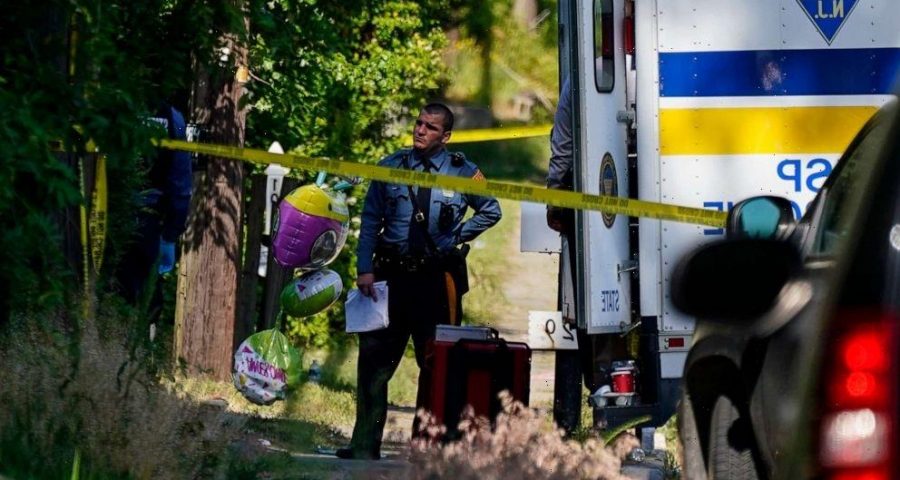 A massive search for the unidentified assailant continued Sunday morning in Cumberland County, where the mass shooting broke out at a large home in Bridgeton, New Jersey, near Fairfield, just before midnight, prompting party revelers to dive for cover or run for their lives.

A 30-year-old man and a 25-year-old woman were fatally shot, and a dozen other injured adults were taken to hospitals, including one in critical condition, according to the New Jersey State Police. The names of the two people fatally shot were not immediately released.

One partygoer described himself as the uncle of the woman shot to death, telling ABC station WPVI in Philadelphia that his niece was “a good girl” and he is “absolutely heartbroken.”

Aerial video from WPVI’s helicopter showed evidence of the chaos that erupted, with tents and chairs toppled and debris strewn across the property.

A motive for the shooting remains under investigation, police officials said. Police ask anyone with information about the episode to contact state investigators immediately.

Police officers were seen combing through a cemetery across the street from the home where the shooting occurred and an adjacent wooded area.

More than 100 people were attending the birthday party, which was a 1990s-themed event, according to community leaders.

“I just started hearing at first what I thought was fireworks, it was really gunshots, and I heard nine in rapid succession,” Rev. Michael Keene of the nearby Trinity AME Church, told WPVI. “If you’re going to a party, why do you need to take a gun? If you’re there to have a good time, why do you need a gun with you? That means you’re expecting trouble to me.”

The shooting comes during a surge in gun violence across the country and marked at least the third time in 47 days that multiple people have been shot at birthday parties.

On May 6, six adults were fatally shot at a birthday celebration in Colorado Springs, Colorado, by a gunman who died by suicide, police said. On April 5, a mother and her two daughters were fatally shot at a birthday party in Brooklyn, New York, for a 9-year-old girl, who hid in a room and called 911, telling an operator the slayings were committed by her father, who was later found dead after taking his own life.

New Jersey Gov. Phil Murphy condemned the latest gun tragedy in his state as a “despicable and cowardly act” and called on Americans to demand the passage and enforcement of “strong common-sense gun safety laws.”

“No community should ever experience what occurred last night in Fairfield,” Murphy said in a statement.