The Thomas sisters already know how to clip a sheep, tend newborn lambs and help feed a flock.

But they’ve had to learn new skills during the COVID-19 pandemic. 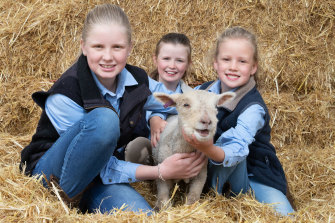 Imogen, Lexi and Emma Thomas at their farm near Hamilton with Tiny the lamb.Credit:James Mepham

Yes, the 2020 Royal Melbourne Show, due to run from September 19 to 29, was cancelled, but for the first time officials ran the junior agriculture event online.

The sisters, whose family runs a 255-hectare, 1600-head sheep farm at Cavendish, north of Hamilton, watched videos of rams being paraded in footage recorded at three properties: one near Horsham, one in South Gippsland and one at Tintern Grammar in East Ringwood.

The sisters then had to present, in their own short videos, their assessments of the animals’ health, conformation with breed characteristics and appearance. 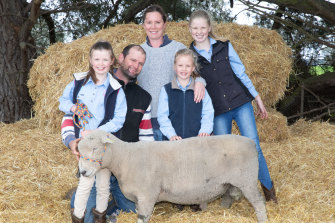 "They were brilliant for their ages, very thorough with their explanations and confident," said Bron Ellis, one of the event judges.

The girls' father Simon Thomas was proud that Imogen won the 12 to 15 age group in her judging of short-wool texel sheep.

Lexi won the under-12 category, judging a long-wool breed, romney, that she hadn’t previously known much about.

Emi Hughes, from One Tree Hill in South Australia, won the 16 to 19 age group.

Mr Thomas said the winners' prizes were free tickets to next year’s Royal Melbourne Show, and entering the contest had built the girls' confidence, "knowing they can do a video and submit it, and they learnt about presentation and following timelines".

In terms of sheep knowledge, "they haven’t just fluked this. Every show they go to, they watch the sheep being judged and take notes. It’s a good reward for effort. I think that’s what they’ve learnt".

The Thomases have lived in near-isolation since last summer.

All 15 agricultural shows they usually attend were cancelled, as were Cavendish’s football and netball seasons, the village’s redgum festival and even school events.

But for their farm, "it’s probably the best season we’ve ever had", Mr Thomas said, with good early rains bringing pasture growth, followed by a mild winter.

"Everyone you speak to is saying, 'We would have had a champion sheep this year [had shows been running],' because everything was looking that good," he said.