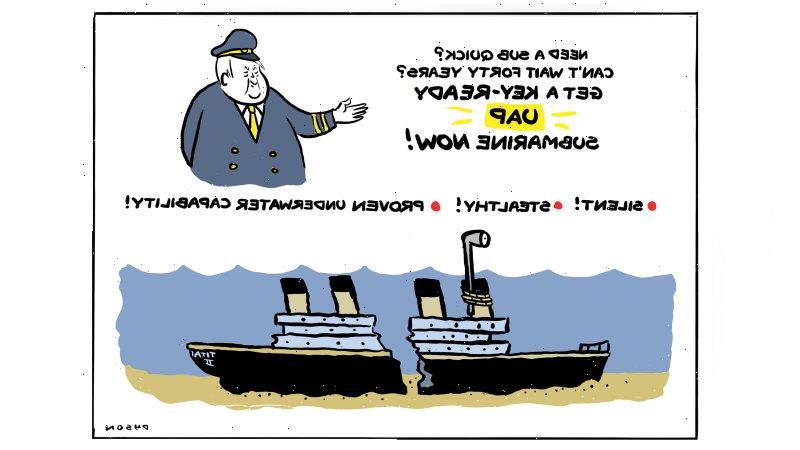 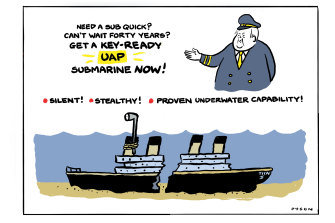 To submit a letter to The Age, email [email protected] Please include your home address and telephone number.

A disgraceful slur against the teaching profession

Stuart Robert’s description of teachers as “duds” (The Age, 17/3) is disgraceful. Sure there are teachers who should not be in the profession, just like any profession. There are many reasons for their unsuitability including health, temperament, ability to actually teach, inappropriate behaviour towards vulnerable children, subject knowledge and competence.

In my years in education, I have never met or heard of a teacher who could “not read or write”. I have seen some really bad teachers in the private system. And headline after headline clearly demonstrate the inability of private schools to prevent sexual abusers from occupying their ranks.

Despite being appalled at statements made by politicians, I have never called for one to resign or be sacked. I do so now for the acting federal Education Minister.
Chris Curnow, Mordialloc

The odds are stacked against public schools

Stuart Robert, before you make any more attacks on the thousands of teachers who work in the nation’s public schools, let me share some facts of life with you. The independent schools you laud do not have to accept students they do not want. Public schools can and do.

Also, public schools cannot reject or expel students who may bring down the schools’ academic results. Private schools can and do. Teachers in independent schools do not, in general, work in schools that lack adequate facilities to do their job properly. Public school teachers can and do – frequently. As acting Education Minister, you need to get some education.
Julie Moffat, St Leonards

Look to your own ‘dud’ record, Minister

How galling for teachers to be called “duds” by a politician of the calibre of Stuart Robert. He was sacked by Malcolm Turnbull for breaching ministerial rules relating to conflict of interest (The Age, 12/2/16), and had to repay $37,975 of “excess usage charges” in home internet bills footed by taxpayers (The Age, 12/10/18).

He also charged taxpayers more than $2000 so he and his wife could attend a Hillsong conference, and he oversaw and defended a disastrous robo-debt debacle that cost the taxpayer and economy billions of dollars. Imagine what even a fraction of that money could have done to lift educational resources. Dud does not even begin to describe Robert’s performance.
Stephen Farrelly, Donvale

The inequitable resourcing of our schools

It has been my experience, as a teacher and a teacher educator over 50 years, that the teachers who fail to both discipline and engage students in public schools are only too ready to seek the comfort of private schools where such matters are secondary to the demand for high ATARs in year 12.
Rod Moore, Kyneton

A simplistic view of ’private versus public’

Ignorant, uninformed opinion is not a good base from which to build a quality education system. The “public versus private” debate is a complex issue that requires a sharp intellect to unravel. Shame on you, Stuart Robert, for being so clueless on this important matter that shapes the future of our children and nation.
Stuart James, Leneva

Acting Education Minister Stuart Robert blames “dud teachers” for the decline in academic results of our students when he should be apologising for doing nothing to reverse the decline in the attractiveness of teaching as a career.

His own research shows that the current salaries and career prospects are failing to recruit sufficient numbers of high-quality graduates. Ultimately the responsibility for ensuring Australia has a high-quality teaching workforce rests with our governments.
Lawrence Ingvarson, Canterbury

Walk a day in our shoes

Stuart Robert, I wonder if you have been in a public school in the last 30 years. On top of the crowded curriculum, which keeps getting more and more crowded, teachers these days have to cope with intensified student wellbeing issues brought on by COVID-19.

The range of student needs up against the government’s wish for higher academic standards leave teachers bereft of any time to focus on what is really important – engaging the students. Why don’t you spend the day in a life of a teacher, minister, and actually see what you should be fighting for.
Claire Stonehouse, Wantirna South

Who do we fear? The Biden administration’s view is that imposing a no-fly zone over Ukraine would inevitably involve shooting Russian planes out of the sky if boundaries were breached – and that this would be tantamount to World War III (The Age, 18/3). Apart from Russia, who will retaliate?

And surely Vladimir Putin is as fearful of nuclear war as the rest of the world and is unlikely to act. Ukraine President Volodymyr Zelensky is pleading, begging for this help. Where are his allies at such a time?
Lynn Hall, Hawthorn

Joe Biden is right to be outraged at what Vladimir Putin is doing in Ukraine. But that outrage needs to come with a caveat. Biden was vice-president to President Barack Obama when he was bombing the peoples of Iraq and Afghanistan and killing hundreds of thousands of civilians. Joe Biden stood back and said and did nothing. At the very least his current outrage is a bad look.
Brian Sanaghan, West Preston

The real threat we face

Deputy Prime Minister Barnaby Joyce thinks that our youth should consider “how they will pay for defending our nation from the most egregious forms of aggression that may be forced onto us in our lifetime” (The Age, 17/3). Really?

What represents a greater danger to our way of life right now? The remote possibility of an invasion from an unnamed aggressor at some time in the future? Or the very real and current threat of climate change causing loss of life, homes and habitat due to increasing bushfires, floods, coastal erosion, mosquito-borne viruses etc? This government would rather spend billions on protecting us from a hypothetical invasion than from a real crisis.
Brett Clarke, Croydon

Barnaby Joyce talks about “compass points of priorities” when pointing to the need for young people to focus on how to defend their country during war, and how to pay for a war, if there were one. But a compass has many points, so perhaps he should empathise with the children’s zeal to mitigate carbon emissions, and make the environment one of his points too.
Meg McPherson, Brighton

Royals need to give

Yes, independent economist Saul Eslake, Scott Morrison’s GST deal with Western Australia is “outrageous and scandalous” (The Age, 17/3). However, don’t expect to hear any criticism of it from the ALP. Once again, good policy is held hostage by electoral maths.
Brian Collins, Cardigan

So Australia’s five biggest cities are in the top 20 of least affordable housing markets in the world (The Age, 17/3). We are really punching above our weight. I wonder what could be contributing to that unenviable statistic. Maybe the fact that people who buy a property for investment, rather than to live in, can benefit from negative gearing. This has to go, for fairness’ sake. But who will have the political courage to stand up against the vested interests?
Kylie Marty, Northcote

A truer definition of work

Unemployment figures and participation rates can be misleading if we want the full picture of the jobs “market”.

We also need to assess the number of people who are not participating because they have given up, the number of hours worked, and the expected length of the employment. These are easy to measure.

But just as important, and much harder to measure, are the levels of doubt and anxiety felt by people about their current or next job, and the degree of satisfaction about their work. Are they working in jobs that they trained, or hoped, for?

The fair distribution of work is one of the most important issues facing us. Paid employment is central to most people’s lives. A job brings a sense of self-worth that one is able to provide for oneself and one’s family, and with many jobs, a sense of identity. It is far too important to be left to a single indicator – a definition of “in work” (a few hours a week and you are working!) that may have been appropriate in the 1960s but not today.
Howard Tankey, Box Hill North

The campaign is on …

Ah yes, can’t you just smell the sweet ambrosia of election time? We have already had the “interest rates are going up” speech. We are now in “the economy is back on track, thanks to us” qualifier. Soon it will be law and order, followed quickly by “who can you trust?” My pathetically small kingdom, for any politician saying anything interesting this election season.
David Jeffery, East Geelong

Isn’t everybody sick of it? This phoney federal election campaign has been going on for way too long. Scott Morrison, please call the election date right now. Get it over and done with.
George Worotnicki, Murrumbeena

Horse poo? Bring it on

I would love some “steaming piles” of fragrantly vegan horse poo in my street (Letters, 18/3). It would go straight onto my garden and I would probably have to race my neighbours for it. Carnivore dogs’ droppings are a completely different matter.
Jane Clark, Hawthorn East

Last of the true believers

Julie Szego’s excellent piece – “The senator who bore the cost of challenging the prevailing view” (Opinion, 16/3) – unfortunately confirms the major flaw in Labor’s ethos. Conform or suffer the consequences. The “light on the hill” has been well and truly extinguished. Vale Kimberley Kitching, a true believer.
Bill Holmes, Kew

All of the Labor prime ministers had their flaws. However, with all their landmark decisions – for example, Gough Whitlam legislating for a universal health insurance scheme which ultimately became Medicare – Labor values existed. They still exist today and Senator Kitching was not the sole repository of them.
Des Files, Brunswick

Duds across the board 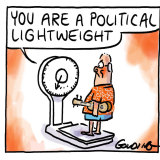 If Morrison concentrated on running the country, instead of putting politics first and his people second, we’d all be better off.
John McGregor, Ferntree Gully

Beazley, Shorten and Turnbull are among our “leaders” who lost weight. It didn’t seem to help them politically.
Ann Ritchie, Bellfield

Minister Robert, there is no excuse for dud politicians. Nice work on dividing the education community even further.
Felix Patton, Mount Martha

Anthony, how to secure my vote: don’t dress up in a costume pretending to be anything other than our future leader.
Anne Maki, Alphington

We know who the fake is – the bloke who says he’s a Christian but doesn’t act like one.
Graeme Mattinson, Altona

Can we legislate a tax on use of the colour yellow in print advertising? About $1 per square centimetre would achieve budget repair.
Ron Burnstein, Heidelberg

Does the Australian government have no duty of care to protect its citizens?
John Crossley, Oakleigh

Don’t worry, Bevo, we still love you. You were just protecting your pups.
Robin Jensen, Castlemaine

Luke, Mr Beveridge, can I play in your side … please? I’ll behave.
David Cayzer, Clifton Hill

I’m not a fan of Luke Beveridge, but how precious are the media? They can intrude wherever they like and feel they are sacrosanct.
Michael McKenna, Warragul

Whilst Beveridge’s post-match tirade was unforgivable, surely the AFL must take disciplinary action against that moustache.
Monty Arnhold, Port Melbourne