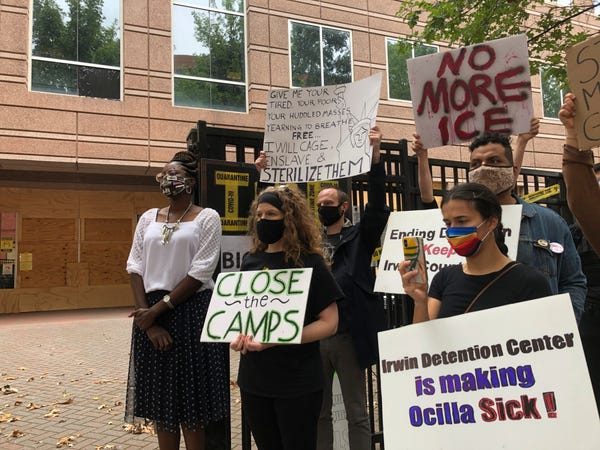 An Immigration Customs and Enforcement detention center in rural Georgia will no longer refer patients to an OB-GYN who has been accused of not fully explaining procedures he performed on detained women, an ICE official confirmed to Insider.

Dr. Mahendra Amin was thrust into the national spotlight earlier this month after Project South announced a whistleblower complaint accusing the doctor of performing a high rate of hysterectomies on women who were detained at the Irwin Detention Center in Ocilla, Georgia.

A letter from Project South, which was sent to US officials demanding an investigation, had quoted a facility nurse — Dawn Wooten — calling the doctor the "uterus collector."

Irwin County Hospital, where Amin operates, has said its records show only two such procedures happened there since 2017.

Insider was unable to confirm an unusual rate of hysterectomies. Lawyers for women who have been detained at the center, though, did say there were issues with medical care.

Amin has seen at least 60 detained women, said Andrew Free, a lawyer working with other attorneys to investigate medical care at Irwin County, told the Associated Press this week.

One lawyer who was based out of Irwin for two years told Insider that she had complained to facility officials about Amin in 2018 on behalf of her client, who was seriously ill and reported not being treated with respect by the doctor.

Last week the AP published an investigative report detailing the medical records of four women detained at Irwin. The AP said that while it wasn't able to confirm allegations of mass hysterectomies, detainees — or their attorneys — described being confused about gynecological procedures that Amin had performed on them.

Mileidy Cardentey Fernandez, a 39-year-old from Cuba, told the AP that she underwent an operation to treat ovarian cysts a month ago but wasn't sure what procedure she got. After requesting her medical documents multiple times, she received more than 100 pages, but none from the day of the surgery, the AP reported.

An attorney for another woman, Pauline Binam, of Cameroon, told the AP that Binam had gone to Amin for an irregular menstrual cycle. Binam was told she would be having a "D&C," or a dilation and curettage, to remove a part of the lining in the uterus — but when she woke up, she learned Amin had removed one of her two Fallopian tubes, her attorney, Van Huynh, told the AP.

It has also been reported by Insider and other outlets that Amin is not board certified and had previously been named in a DOJ lawsuit alleging Medicaid and Medicare fraud.

"Maybe it's a money scheme, but people have been telling the facility that this doctor had been hurting them for at least two years," the lawyer, who Insider agreed not to name, said. "If the government tries to say they didn't know about this, they're lying."

Project South, a nonprofit that has completed reports detailing treatment of detainees at the facility, said that the investigation into Wooten's complaint shouldn't end with the hospital's response to the allegations.

"Whistleblowers raise the alarm so others can investigate and end the abuses they bring to light. A full investigation involves interviewing witnesses, reviewing records, and finding all the facts," Azadeh Shahshahani, Legal and Advocacy Director for the organization, told Insider in a statement. "Because Ms. Wooten disclosed poor recordkeeping adversely affecting women in detention, including shredding of medical requests submitted by detained immigrants, we hope investigators seek testimony from the women at the center of this abuse: those women who are suffering in detention.

Scott Grubman, an attorney for Amin who has previously denied any truth to the allegations against him, didn't immediately respond to a request for comment on Wednesday.