Mr Millachip was attacked at Perth’s Port Beach on Saturday morning, as he was going for his usual 1 kilometre swim after a run with his wife. 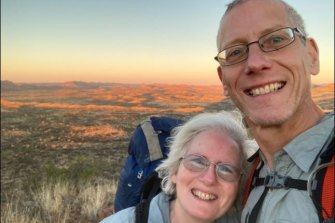 Paul Millachip was killed by a shark at Port Beach in Perth. He is pictured with his wife.Credit:WA Police

Acting Inspector Troy Douglas of the Fremantle District Office said all that had been found since the attack was a pair of goggles believed to have been Mr Millachip’s.

Witnesses saw Mr Millachip as he was attacked by a large shark at the popular Perth beach at about 10am.

The beaches in the surrounding areas remain closed.

His wife, who was at the beach with him, thanked police and others for their efforts to find her husband, saying police had been “extremely thorough and extremely professional”.

She said the attack “came out of the blue”.

Mrs Millachip, who asked that her first name not be used, spoke to the media alongside Acting Inspector Douglas. She released one photograph of them together.

“He was a wonderful man, a wonderful father and he loved his exercise,” she said of her husband.

Fighting back tears, she made special mention of the teenage boys in a boat nearby who witnessed the horrifying attack. They attempted to help Mr Millachip, and then took off to warn surfers and swimmers nearby of the danger.

“He died doing what he enjoyed doing the most, which was exercising,” Mrs Millachip said.

“We had been going down to the beach two or three times a week. We would go running first, and then go swimming.”

Her husband would swim for about a kilometre, and had participated in triathlons and marathons.

She said he was a “lovely man and a great father” and his loss was very hard to deal with.