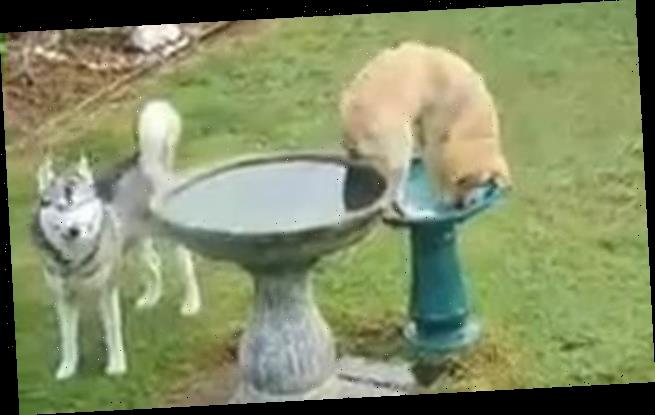 Doggy paddle! Adorable moment golden retriever puppy shuns her own pet pool for a dip in the BIRDBATH

This is the adorable moment a golden retriever pup ignores her doggy pool and goes for a swim in a birdbath.

Footage shows Moose, a five-month-old puppy, lying on a birdbath in Byron Bay, Australia, on January 1.

The adorable dog balances precariously on the bowl while a Husky, named Diesel, circles to see what she’s doing. 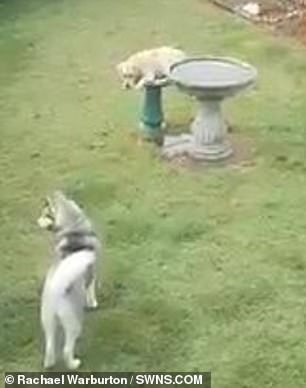 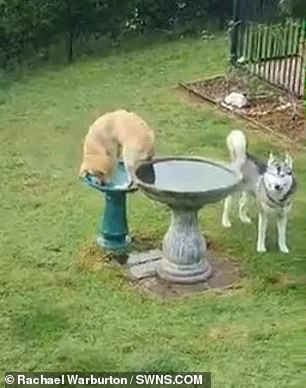 Footage shows Moose, a five-month-old puppy, balances precariously on a birdbath in Byron Bay, Australia, on January 1 while a Husky, named Diesel, circles to see what she’s doing

The pet continues to lie in the bowl to cool off, despite having doggy pools of her own, and appears quite comfortable on her perch.

She rises to stand on the birdbath and starts wobbling to try and keep her balance while the older dog pays her no attention.

Despite her best efforts, Moose ends up toppling over before she can finish her swim.

Owner Rachael Elizabeth, 37, said: ‘She occasionally drinks from the birdbath, but she’s never done this before.

‘We were just chilling on New Year’s Day, a bit hungover, and we saw Moose in the birdbath. We thought it was hilarious.

‘She’s a massive goof and generally does stupid puppy stuff, like digging massive holes, but that day it was stinking hot. 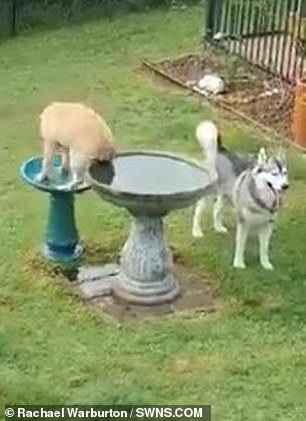 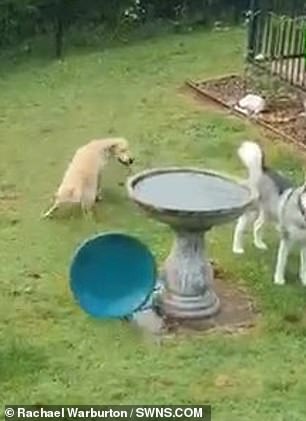 The pet continues to lie in the bowl to cool off, despite having doggy pools of her own. She eventually wobbles and falls off the bowl, toppling it on the grass

She added: ‘Moose was probably just trying to cool off.

‘It was weird though. We’ve got both a full pool, and a doggy pool, but she hopped into the birdbath.

‘She’s such a friendly dog. We think she was just trying to show off in front of Diesel.’