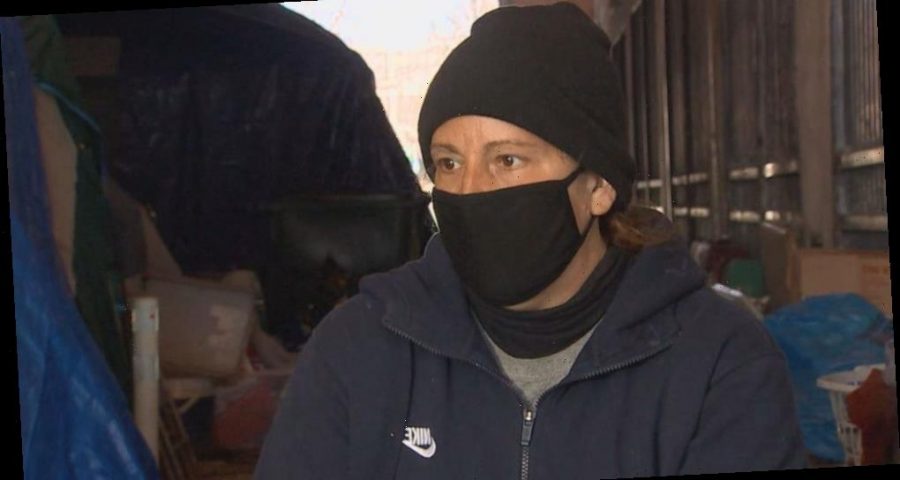 As millions of Americans receive a third direct stimulus payment from the federal government this month, many of the poorest and most vulnerable people in the country are still struggling to access those funds.

For people living without housing or basic resources like computers and internet access, banking accounts or even permanent addresses, navigating government websites and depositing paper checks has proved incredibly challenging, especially for those living on the street or in their cars this year.

Local officials across the country say homelessness and housing insecurity has only grown since the start of the pandemic. While there is still no national data for homelessness in 2020, a report published last week by the Department of Housing and Urban Development found that over 580,000 people experienced homelessness prior to the pandemic.

After losing her job and apartment, Tricia Lee and her son have lived on and off the streets of downtown Chicago over the last year. She says she has yet to receive a single stimulus check.

Lee spoke to ABC News in front of the tent that she’s been sleeping in since leaving her apartment. She said she had tried to sign up for the stimulus payments online, but with libraries closed during the pandemic, it felt nearly impossible to figure out the correct forms to fill out.

“It’s very hard when your cell phone doesn’t have your minutes on it… You don’t have Wi-Fi, you can’t call them, you can’t contact them,” Lee said, adding that she keeps her phone charged by plugging it into an outlet she found behind a gas station.

After multiple attempts, Lee said the IRS emailed her back with one final, crucial question.

“They emailed me back and said [I was] approved, and then because I didn’t have an address….no address, no money,” said Lee.

Lee said she understands why some people might give up on trying to access their stimulus payments. “It’s just too much. It’s too time consuming…. too difficult, too depressing, actually,” she continued.

Advocates who have been working with Americans experiencing homelessness say that under President Joe Biden’s administration, for those who did not sign up for stimulus payments last year, it’s only gotten harder for people to sign up to receive the latest round of direct payments.

Prior to the pandemic, an estimated 10 million Americans had income low enough that they were not required to file tax returns, according to the Tax Policy Center. These people were therefore not in the IRS’ system to receive direct stimulus payments last year. To compensate, the IRS launched a “non-filer” form, which allowed those people who had not filed tax returns to sign-up to receive stimulus payments allocated in Congressional relief legislation.

But this year, with a third round of direct payments rolling out, the IRS has scrapped the non-filer form and is instead encouraging anyone who isn’t yet in the system to fill out a full tax return. The government agency told ABC News it is working with shelters and community partners to help Americans complete the paperwork, and that by filling out a full tax return, Americans may be eligible for benefits and funds beyond those one-time payments.

“If you signed up for the first check, you can get all the other checks sent to the same place. So, as long as your address hasn’t changed, you’re fine,” Ryan Spangler, of Heartland Alliance in Chicago, told ABC News. “It’s harder to sign up folks now that haven’t signed up at all, because you have to file taxes and for someone living on the street who is homeless, that’s a difficult process.”

Last year, Spangler brought his laptop to encampments around his city, where he helped hundreds of residents experiencing homelessness clear hurdles to receive their direct payments. He is now working with Lee and other people still hoping to sign up.

The IRS has encouraged Americans to enter their banking information to receive direct payments electronically, but Spangler said most people he has worked with did not have banking accounts.

“Most folks are getting the paper checks and then are like, ‘OK, what do I do with this now?’ Because I don’t know how to really cash, because I don’t have an ID and the DMV is closed and I can’t get a social security card. So, you know what, you’ve got me this money, now, how do I cash it?”

Erica Robbins, who founded the organization Be a Blessing Birmingham in Alabama, said she too was confused and frustrated by the IRS change in policy this year. Many of the people she closely works with are not connected to the formal shelters, she said.

Like Spangler, Robbins helped many of her local neighbors receive the stimulus payments last summer and before the holidays. She worked with local bankers who she knew personally to help people without bank accounts or identification deposit their checks.

Donald Whitehead, the executive director of the National Coalition for the Homeless, said that while the $1,400 direct payments cannot solve homelessness, they can hopefully help keep the problem from becoming worse.

“It’ll give people money for a down payment, money to pay utility charges, money to be able to afford rent for a couple of months,” said Whitehead. “So, it is an enormous positive outcome for people living on the margins and especially those who have gone into homelessness.”