Premier Daniel Andrews and Prime Minister Scott Morrison yesterday unveiled a raft of rail upgrades, including 12 kilometres of new express tracks for Geelong trains and $10 billion for the airport rail link, which will run via the new Metro Tunnel. 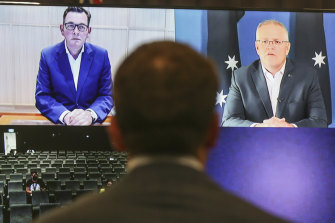 The $4 billion Geelong rail line upgrade will shave 15 minutes off travel, but the proposed 50-minute commute falls short of 35-minute fast rail promised by Labor at the 2018 state election and 32-minute trips promised by Mr Morrison before the 2019 federal poll.

"I think they’re absolutely turning their back on the regional and rural commuters," said Cr Harwood, the council’s transport spokesman.

Yesterday, both governments pledged $5 billion for the Tullamarine airport rail link, which has been on Victoria’s infrastructure agenda since the mid-60s but never delivered, whereas Sydney and Brisbane built airport train links two decades ago.

Construction on the airport rail link will start in 2022 and finish by 2029, delivering train services to the city within half-an-hour every 10 minutes. Airport trains will run through the new Metro Tunnel and into the south-eastern suburbs via Cranbourne and Pakenham lines.

The airport rail route was broadly welcomed by public transport advocates and regional councils, which said the service would be paid for on a Myki card and have comparable prices to SkyBus tickets ($19.50).

But Mr Hearsch said airport trains would chew up a third of the Metro Tunnel’s initial capacity, which was needed for extra Melton services.

Tuesday’s state budget will include $2 billion for the Geelong upgrade, matching $2 billion pledged by the federal government on the project to be built from 2023. 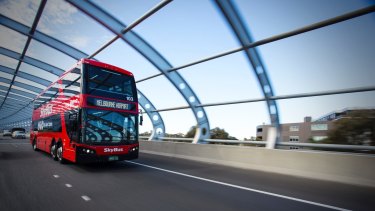 The planned route will be no faster than the Skybus at peak hour. Credit:Roy Chu

The first stage of the upgrade will restore a direct link between Geelong and Werribee and run most of Geelong’s trains via new express 12-kilometre tracks between Werribee and Laverton.

This new route will be eight-kilometres shorter and bypass a slew of stations on the Werribee line, freeing up capacity on the congested Geelong corridor through Wyndham Vale for services to Wyndham, Melton, Ballarat and Bendigo. Some Geelong services will continue to run on the current route.

Both the state and federal government said these changes would result in a 15-minute saving on trip times.

The former V/Line executive estimated that 160km/h express tracks through Werribee would save about eight minutes on the journey.

"The notion that simply providing two additional express tracks between Laverton and Werribee will result in ‘fast trains’ to Geelong is a bit of a con job," Mr Hearsch said.

"What about the poor commuters from the burgeoning growth area around Melton that were meant to have between nine and 11 high-capacity metro trains per hour in the peaks connecting directly into the Metro Tunnel?"

But these trains still face constraints between Newport and the city, where Geelong trains will mix it with other suburban services on tracks that are already at capacity.

Running airport trains through the Metro Tunnel revives an old plan that was rejected by bureaucrats four years ago, as it would result in less capacity for desperately needed new services in the Melton growth area.

The notion that simply providing two additional express tracks between Laverton and Werribee will result in ‘fast trains’ to Geelong is a bit of a con job.

The Metro Tunnel will initially only have capacity for 18 trains per hour when it opens, which will be used up by six airport trains and 12 to Watergardens or Sunbury.

The tunnel will ultimately have capacity for up to 24 trains per hour – and could run an additional six Melton services.

Mr Andrews on Saturday defended a decision to ditch a private-sector proposal for an airport rail tunnel, saying the chosen option would be cheaper and delivered faster.

He said that under the chosen route, commuters from the city would be able to get to the airport from five Metro Tunnel city stations rather than just Southern Cross.

"You’re getting to the centre of Melbourne quicker, you’re using a service that simply isn’t available now and getting where you want to go rather than everybody having to hub through Southern Cross Station," Mr Andrews said.

Cr Harwood questioned why the federal and state governments had committed a total of $14 billion to the upgrades without a business case. He backed a business case prepared by a group of regional councils for a high-speed tunnel for airport trains that would also overhaul the country rail network, bringing Ballarat within 45 minutes, Geelong 35 minutes and Bendigo 65 minutes.

“This is really bad news for regional and rural train commuters – there’s no business case to substantiate what is being said and no financial modelling to give us some description of the cost and savings," Cr Harwood said.

The business case for the airport rail link route was due for completion this year, but is now expected next year.

Catch all the day’s headlines

At the end of each day, we’ll send you the most important breaking news headlines, evening entertainment ideas and a long read to enjoy.  Sign up here.