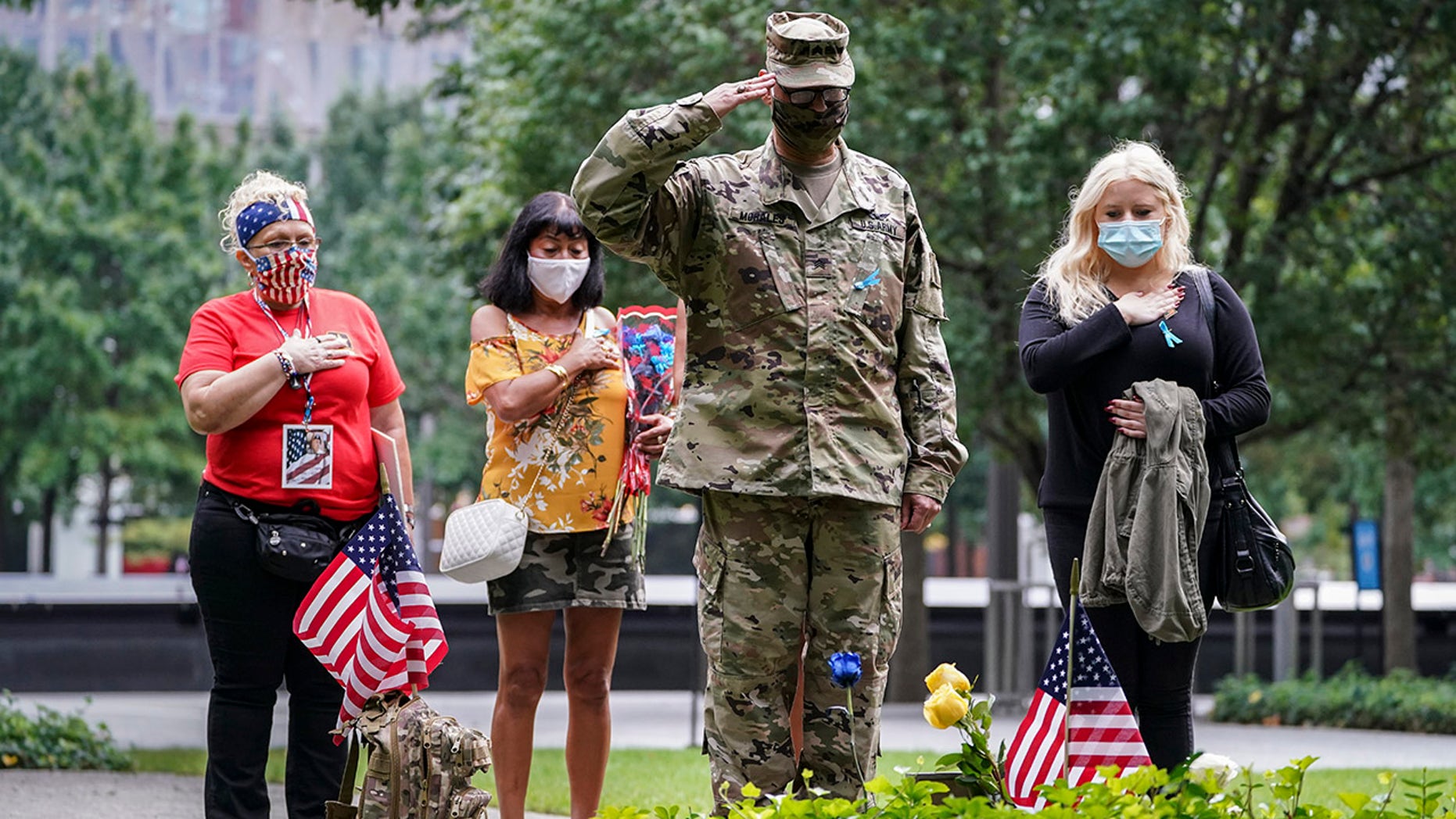 Americans on Friday marked the 19th year since the Sept. 11 terrorist attacks with somber memorials for the nearly 3,000 people killed in New York, Virginia and Pennsylvania.

The families of the fallen men, women and children once again came together to honor their loved ones at the sites their lives were stolen.

Across the country, flags were flown at half-staff and bells tolled — a sad visual and solemn sound of collective mourning for those killed in America's deadliest terrorist attack.

Nineteen years ago, passenger jets hijacked by Al Qaeda terrorists slammed into New York City's iconic World Trade Center and the Pentagon, located just outside of the nation's capital. Another plane crashed into a field in Shanksville, Pa.

Smoke and soot strangled the air around the sites for weeks, delivering a huge blow to America's collective psyche. 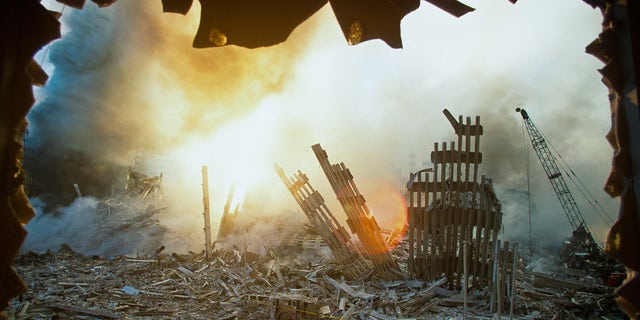 The rubble of the World Trade Center smoulders following a terrorist attack September 11, 2001 in New York. A hijacked plane crashed into and destroyed the landmark structure. (Photo by Porter Gifford/Corbis via Getty Images)

In New York, victims’ relatives began gathering early Friday morning for split-screen remembrances, one at the Sept. 11 Memorial Plaza at the World Trade Center and another on a nearby corner, set up by a separate 9/11-related organization.

The cherished tradition of relatives reading victims' names in person was suspended this year due to the coronavirus pandemic.

Vice President Mike Pence attended both remembrances, while Democratic presidential nominee Joe Biden will be at the observance on the memorial plaza.

Both men, in dark face masks, spoke briefly to each another.

President Trump and Biden will both go to the Flight 93 National Memorial in Pennsylvania — but at different times, Trump in the morning and Biden Friday afternoon.

This year's memorials come as the country continues to battle coronavirus, which has infected 6.4 million Americans and killed 191,802. 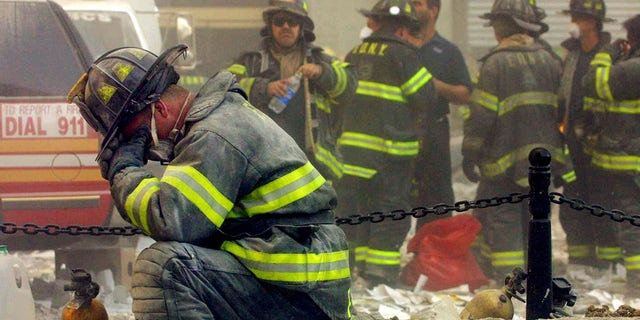 COVID-19 fears have caused the Flight 93 memorial near Shanksville to trim its usual 90-minute ceremony. Memorial spokeswoman Katherine Cordek said the names would be read, but by one person instead of multiple family members.

At the Pentagon, military leaders will conduct the ceremony without victims' families in attendance, and their loved ones' names will be recited by a recording, rather than readers on-site.

In New York — where the nation's deadliest coronavirus spike happened this spring but has since been somewhat contained — leaders of the National Sept. 11 Memorial & Museum said their plan for a no-reading ceremony would honor both virus precautions and 9/11 families' attachment to being at ground zero on the anniversary. 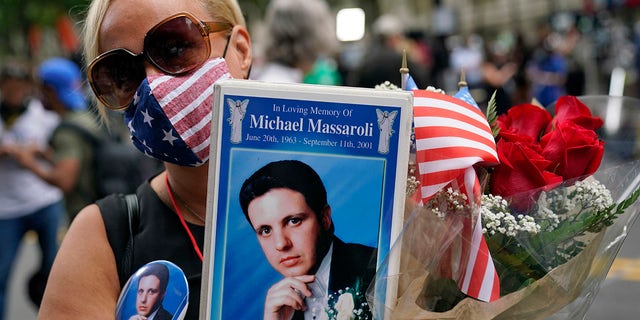 But another 9/11-related organization, the Stephen Stiller Tunnel to Towers Foundation, quickly arranged its own simultaneous ceremony a few blocks away, saying victims’ relatives could recite names while keeping a safe distance.

“We need to keep letting America know what happened 19 years ago. And they need to see that emotion of the day, not a recording,” says chairman Frank Siller. He says he may attend both observances to honor the brother he lost, firefighter Stephen. 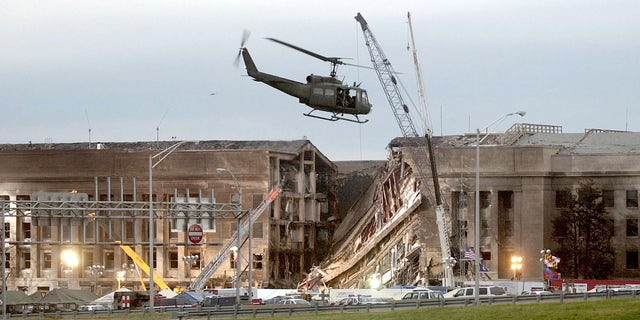 ARLINGTON, VA – SEPTEMBER 14, 2001: (SEPTEMBER 11 RETROSPECTIVE) A military helicopter flies in front of the Pentagon September 14, 2001 in Arlington, Virginia at the impact site where a hijacked airliner crashed into the building. (Photo by Stephen J. Boitano/Getty Images)

Meanwhile, Fire Commissioner Daniel Nigro told current firefighters in a memo last month that the department “strongly recommends” members not participate in 9/11 observances. The department did hold a limited-attendance ceremony Wednesday to add names to a memorial wall recognizing members who died after exposure to toxins unleashed in the wreckage.

Tensions over anniversary plans flared anew when the memorial announced last month it was nixing the Tribute in Light, twin blue beams that shine into the night sky over lower Manhattan. While there’s no official gathering to view the lights, the memorial cited virus risks to the installation crew.

The cancellation outraged some victims’ relatives, police and fire unions and politicians, who noted that construction sites around the city were deemed safe to reopen months ago.

After the Tunnel to Towers foundation said it would organize the display on its own, Gov. Andrew Cuomo and former Mayor Mike Bloomberg, the memorial’s billionaire chairman, stepped in to keep the memorial-sponsored lights on.