American priest, 84, is jailed for 12 years in East Timor after being found guilty of ‘horrendous’ child sex abuse at remote orphanage he founded

An American priest has been jailed for 12 years in East Timor after being found guilty of ‘horrendous’ child sex abuse at a remote orphanage he founded.

Richard Daschbach, 84, was convicted of sexually abusing young girls in his care at the Topu Honis shelter, in the first case of its kind in the staunchly Catholic nation.

He spent decades as a missionary in the country’s remote enclave of Oecusse, setting up a shelter in the 1990s named Topu Honis, which means ‘Guide to Life’, where hundreds of young girls passed through his care.

He was charged with sexual abuse as well as child pornography and domestic violence – and faces similar charges back in the US after he was indicted by a federal grand jury in Washington, DC, in August.

The East Timor trial began in February but was postponed several times before concluding last month.

Campaigners have applauded the verdict but said they would appeal for tougher measures as under the law, Daschbach faced more than twice the prison time he received. 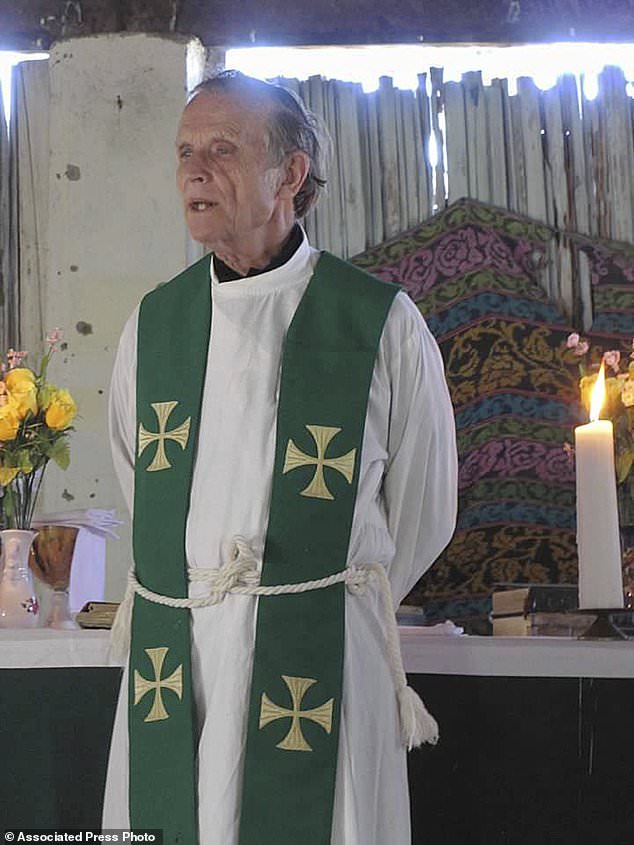 American priest Richard Daschbach, 84, (pictured in 2013) has been jailed for 12 years in East Timor after being found guilty of child sex abuse at a remote orphanage he founded 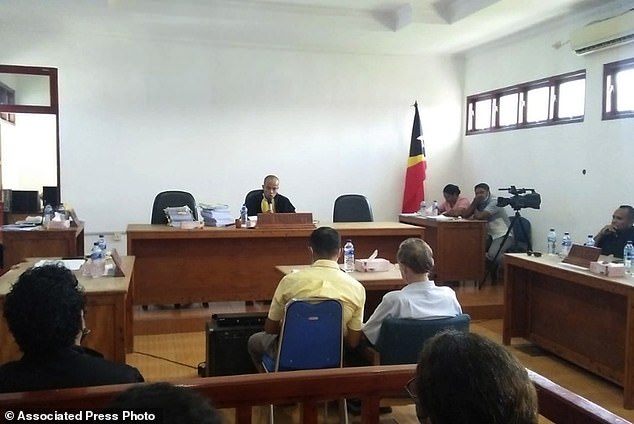 Campaigners have applauded the verdict but said they would appeal for tougher measures as under the law, Daschbach (pictured sitting in the defendan’ts chair during his trial hearing in Oecusse, East Timor, today)

Daschbach maintains strong backing from some, including former President Xanana Gusmao, who went to the court on Tuesday.

East Timor is the most Catholic place outside the Vatican and Daschbach is revered for his role during the tiny Southeast Asian nation’s fight for independence.

The church and foreign donors who once supported the shelter said Daschbach confessed to the abuse in 2018, when he was defrocked by the church.

But he maintains strong alliances and the former priest and his lawyers have at various times refused to comment.

They did not make their legal strategy public and court proceedings were closed.

Daschbach, the son of a Pittsburgh steelworker, was ordained in 1964 by the Society of the Divine Word at its headquarters outside of Chicago.

Hundreds of children passed through his shelter, set up in the 1990s, with many going on to study in the US, Australia and Indonesia. 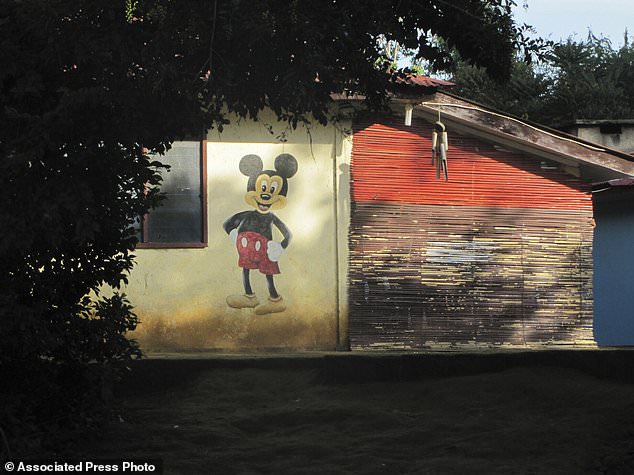 Daschbach, the son of a Pittsburgh steelworker, started Topu Honis (pictured) in 1992 in the remote enclave of Oecusse

More than a dozen females came forward with abuse claims, but only nine were registered in the case due to legal technicalities. During the proceedings, victims complained about threats and online attacks.

The Associated Press spoke with five of the accusers. They recalled their experiences in vivid detail, saying Daschbach kept a list of young girls on his bedroom door and that every night one of those girls would sit on his lap, surrounded by a ring of children and staff members praying and singing hymns before bed.

They said the girl on his lap would then sleep with him that night and that various types of abuse – from oral sex to rape – would occur, sometimes involving other children too. The accusers have not been identified because of fears of retribution.

Daschbach’s lawyer Julio Farma said they are disappointed with the court’s verdict and plan to appeal the decision issued by the three judges.

‘Evidence provided by the shelter matron and former students who lived in the orphanage were ignored by the court,’ Farma told reporters, adding that some accusers changed their statements made earlier to authorities in Oecusse when they were examined in the capital, Dili, and the new statements became the sole basis for the judges’ decision.

‘We cannot accept this and will appeal,’ Farma said.

Dozens of Daschbach’s supporters, including several children brought by Gusmao from Dili, wept and some were screaming as it became clear the court would send the ex-priest to jail.

In a statement Tuesday, JU,S Jurídico Social, a group of human rights lawyers representing the accusers, applauded the verdict but said it would appeal, arguing that the sentence should be harsher.

Under the law, Daschbach faced more than twice the prison time he received. 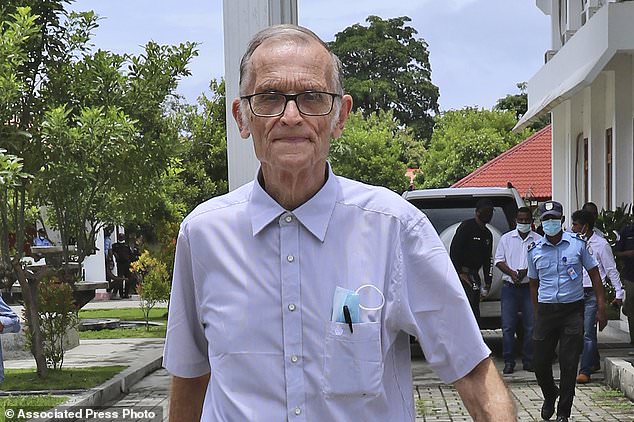 Dozens of Daschbach’s (pictured in outside court in East Timor in February 2021) supporters, including several children brought by Gusmao from Dili, wept and some were screaming as it became clear the court would send the ex-priest to jail

‘The history written today is a bitter history for the entire nation,’ the group said.

‘Our children were subjected to horrendous crimes for such a long time because we, as a society, were blinded by the belief that a figure as the defendant in this case would not commit such crimes against children.’

Separately, a US federal grand jury in Washington, DC, indicted Daschbach in August. He faces seven counts of engaging in illicit sexual conduct at the shelter.

If convicted in the US, Daschbach could receive up to 30 years in prison for each count, but the Department of Justice has not said whether it plans to try to extradite the ex-priest.

Daschbach also is wanted in the US for three counts of wire fraud linked to one of his California-based donors, which accused him in a court case of violating an agreement to protect those under his care.

An Interpol ‘Red Notice’ has been issued internationally for Daschbach’s arrest.