A devastated family has farewelled a young mother and her newborn baby who died alongside the baby’s father in a house fire in Point Cook this month. 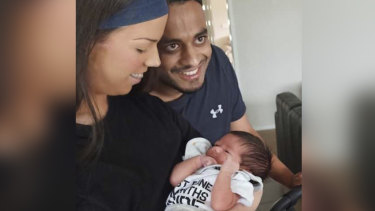 Friends and family gathered for the funeral at St Mary’s Basilica in Geelong on Thursday to honour “a beautiful mother and her little baby”.

“I honestly cannot comprehend what has happened. I didn’t ever think I would stand up here at just 24 years of age and be doing this today for my little sister,” Emily Forrest said.

“I was so proud to become an aunty. Indi and her were just so smitten. You could see the glow with happiness all over them about their beautiful little girl, and now knowing I’ll never see them again is just simply too hard to accept.”

Abigail, or Abbey as she was known to those who loved her, was remembered as funny and bold, with her father, Allan, saying his younger daughter was “no shrinking violet”.

“She stood on her beliefs and her ethic of life. She had a sense of humour like mine,” Mr Forrest said, standing arm in arm with daughter Emily at the pulpit.

He said his words on Thursday would be in lieu of the speeches at Abbey’s 21st birthday and her wedding that he would never get to make.

“Little Ivy was a delight for Abbey and Indi’s lives and the world was meant to unfold for them as a little family,” he said. “Now that dream has been cut short.”

Mr Forrest spoke on behalf of himself and his wife, Liz, who had shared a special bond with her youngest daughter over the arrival of baby Ivy.

“They recently experienced a shared understanding of motherhood after the birth of Ivy,” he said. “Remember them, speak their names, so that they are not forgotten.” 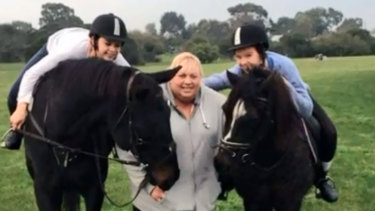 Abbey grew up riding horses with her sister, cared deeply about doing well at school and had aspirations to become a paramedic, the gathering heard.

“There wasn’t hiding much how she really felt about things. Other times she was quiet and reserved, but she was always loyal and had your back 100 per cent,” Ms Forrest said.

“She was always a shoulder to cry on, and then she would make sure to put a smile back on your face no matter what.”

Ms Forrest, whose son was Abbey’s godchild, said she was pained at the thought she could never return the care to Ivy.

“Mum would always say to us, ‘One day, you’ll have to look after each other’s babies.’ Now that we have both had a child of our own, I will never get to fulfil that with my niece,” she said through tears.

“You could see how much they just adored each other. May they all be together forever now. [Abbey] was a sister, an in-law, a daughter, an aunty, a partner, a mother, a friend and an absolute blessing to this earth,” she said.

“Tragically, things happen in life, but this has just broken us. Our family, Indi’s family and an entire community is mourning this heartbreaking devastation of three beautiful young lives that have been taken from us much too soon.”

Jenny Hayes, 46, was arrested in Airport West in early December and charged with three counts each of murder and arson causing death after the blaze.

Ms Hayes is scheduled to next appear in court on March 1. Police say they are not looking for anyone else in relation to the fire.