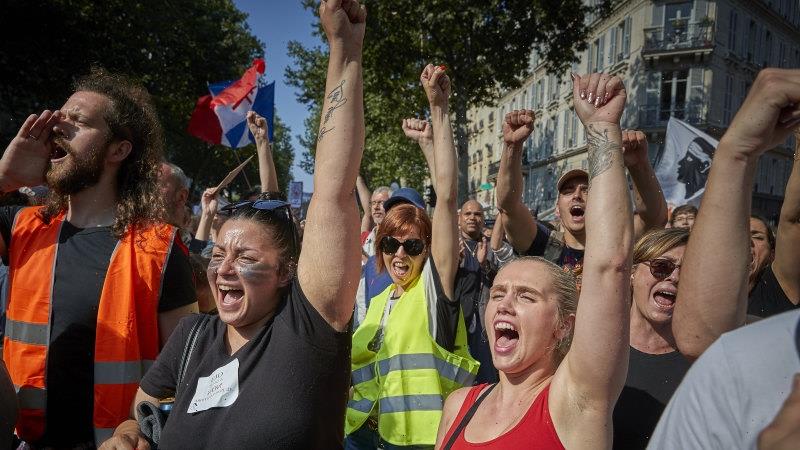 Paris: A French Holocaust survivor has denounced anti-vaxxer protesters making “hateful” comparisons between themselves and Jews who were persecuted by Nazi Germany during World War II, as part of a backlash against new rules mandating COVID vaccinations for healthcare workers.

As more than 100,000 people marched around France against the Macron government’s vaccine rules on Saturday, some demonstrators wore yellow stars resembling those the Nazis forced Jews to wear. 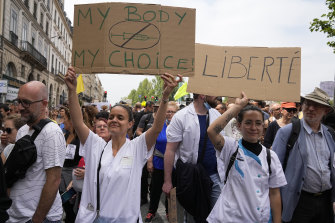 Nurses hold placards as they march during an anti-vaccine protest in Paris on the weekend. Credit:AP

Others carried signs evoking the Auschwitz death camp or South Africa’s apartheid regime, claiming the French government was unfairly mistreating them with its anti-pandemic measures.

“You can’t imagine how much that upset me. This comparison is hateful. We must all rise up against this ignominy,” Holocaust survivor Joseph Szwarc said on Sunday during a ceremony commemorating victims of antisemitic and racist acts by the French state, which collaborated with Adolf Hitler’s regime.

“I wore the star, I know what that is, I still have it in my flesh. It is everyone’s duty to not allow this outrageous, antisemitic, racist wave to pass over us.”

Historian and former Nazi hunter Serge Klarsfeld also took aim at the analogy, stressing on Monday “the yellow star was a symbol of death that excluded Jews from society and marked them for extermination, while vaccines, on the other hand, save lives”. To equate the two, he said, was an odious comparison that served to trivialise the yellow star.

“We won’t cede to a dictatorship of images and outrageous words,” he said.

Saturday’s protests drew a mix of people angry at the government for various reasons, and notably, supporters of the far right. Prominent French far-right figures have been convicted in the past of antisemitism, racism, and denying the Holocaust.

Other anti-vaccination protesters drew on the French tradition of “liberty” or pro-choice slogans typically used to support contraception and abortion rights.

The government is introducing a bill on Monday requiring all healthcare workers to get vaccinated against the coronavirus and requiring COVID-19 passes to enter restaurants and other venues.

The bill enters into force on Wednesday for cultural and recreational venues, and early August for restaurants, bars, and other places. 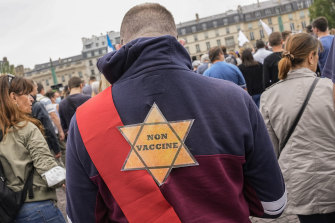 A star that reads “not vaccinated” is attached to the back of an anti-vaccine protester during a rally in Paris on Saturday.Credit:AP

At a large protest in Paris on Saturday against the rules, one demonstrator pasted a star on his back reading “not vaccinated.” Another, Bruno Auquier, a 53-year-old town councillor who lives on the outskirts of Paris, drew a yellow star on his T-shirt and handed out armbands with the star.

“I will never get vaccinated,” Auquier said. “People need to wake up.” 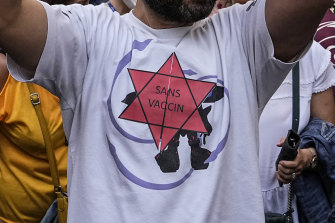 An anti-vaccine protester in Paris on Saturday wears a star that reads “without vaccine”. Credit:AP

Polls suggest most French people support the measures, but they have prompted anger in some quarters. Vandals targeted two vaccination centres in the country’s south-west over the weekend. One was set on fire, and another covered in graffiti, including a reference to the Nazi occupation of France.

France has reported more than 111,000 deaths in the pandemic, and new confirmed cases are increasing sharply again, raising worries about renewed pressure on hospitals and further restrictions that would damage jobs and businesses. 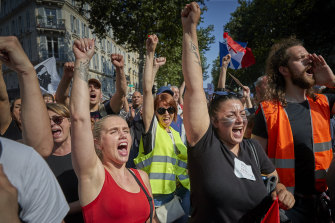 Anti-vaccine demonstrators chant through the streets of Paris.Credit:Getty

The government has ordered tougher border controls on visitors, and some regions have reinstated mask rules outdoors and ordered restaurants and bars to close early.

Klarsfeld, whose father died in Auschwitz, pushed back against protesters’ demands for “liberty” and claims that the latest health measures were dictatorial.

“What freedom is it they seek? The freedom to be contagious?” he asked.

In Russia, popular actor Yegor Beroyev wore a yellow star last month at an awards ceremony, speaking of “waking up in a world where [COVID-19 vaccination] became an identification mark.”