The 12-year-old was found unconscious by his mother at his home in Southend, Essex in April after he took part in what his family believe was a social media ‘blackout challenge’.

He died last Saturday after his mother Hollie Dance fought for weeks to prevent the NHS from turning off his life support.

Doctors said his brain damage was so severe that he had no realistic prospect of recovery but his family fought for him to be kept alive through the High Court, Court of Appeal, and European Court of Human Rights. 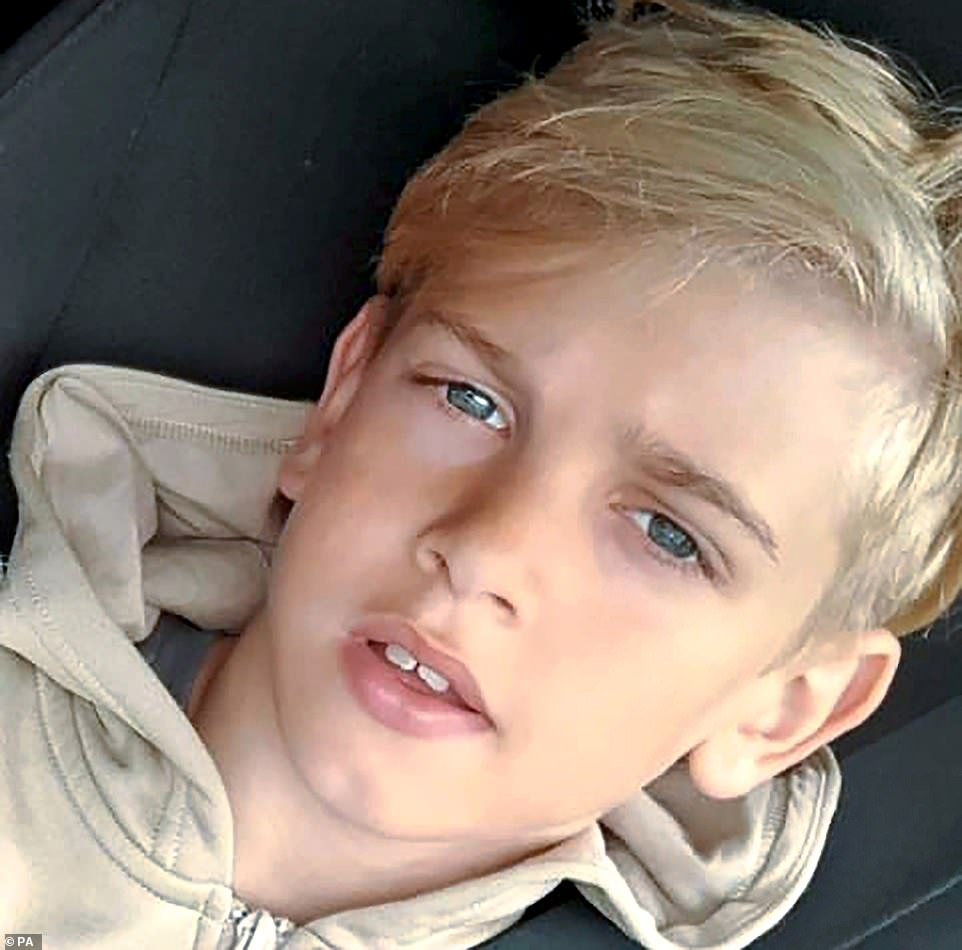 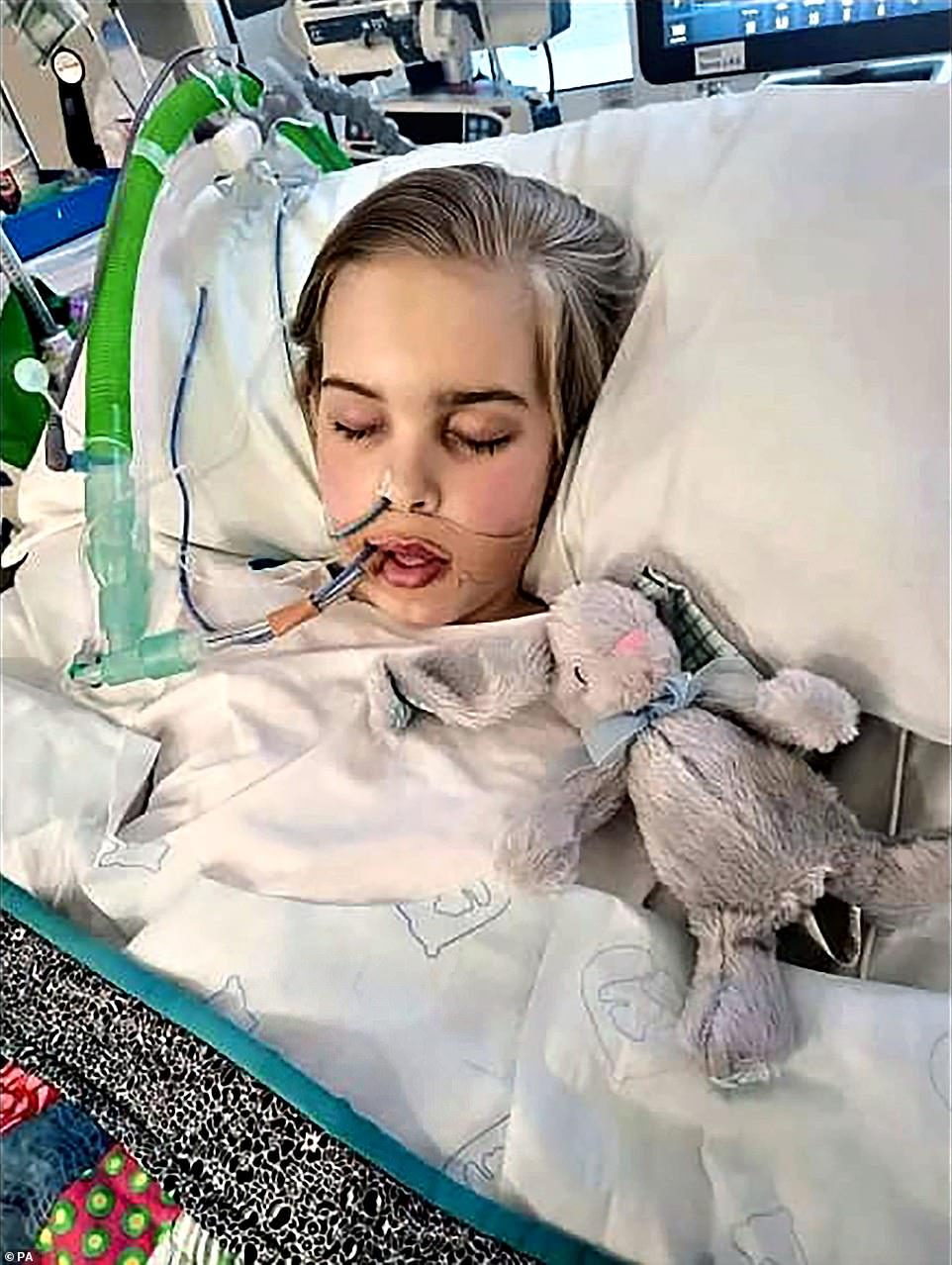 All her pleas were rejected – as was Ms Dance’s call for him to be transferred to a hospice last week, after Barts Health NHS Trust in east London said there were risks he could die during the move without his family around him.

Speaking at the inquest today, coroner’s officer Paul Donaghy said Archie was found unresponsive in his home on April 7.

He said: ‘Paramedics attended and they reported a Glasgow Coma Scale of only 3 and confirmed a cardiac arrest. CPR continued and Archie was transported to Southend Hospital. 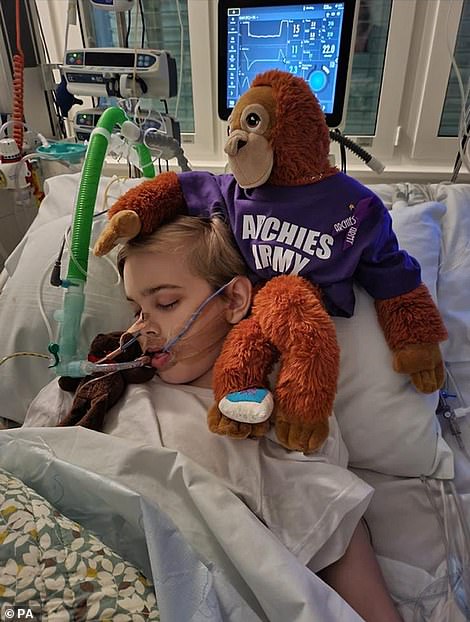 Archie was supported in hospital by soft toys, visits from friends and family and his mother, who stayed by his bedside for weeks at a time

‘Archie was thereafter transferred to the Royal London Hospital and Great Ormand Street Hospital who were both in agreement that surgical intervention would not help Archie. He was reviewed by the Paediatric Neurology team during his admission.

‘Second opinions were also provided by multiple professionals from the Royal London, Queen’s and Great Ormond Street Hospitals who agreed that Archie had suffered severe irreversible brain injury. The High Court, Court of Appeal and Supreme Court were involved in applications to determine the direction of care and the best interests of Archie.

‘With the authority of final court order, life-sustaining treatment was withdrawn on August 6, 2022, in a side room on the intensive care unit and Archie died surrounded by his family and friends. Death confirmed by a hospital consultant.’

Mr Donaghy said a provisional cause of death was identified as catastrophic hypoxic-ischemic brain injury secondary to strangulation.

Senior Coroner for Essex Lincoln Brookes set a date for the full inquest into Archie’s death for February 7 next year.

He told the court that an inquest would be to learn who died, and where, when, and how they came about their death, with ‘no one being on trial’ during an inquest.

He added: ‘I also want to take the opportunity to say that Archie’s death is a tragedy that so many people, especially his family on a personal level. I would like to extend my deepest condolences [to Archie’s family] on behalf of myself and my officers.’

Archie’s case is just one of multiple recent tragedies where parents have fought against doctors’ decisions to stop providing life support to their children, after it has been decided it is no longer in their best interests.

Most agree such battles are extremely difficult for all concerned, and there are calls to review current legislation around state and parental rights in order to avoid children’s lives being fought over in similar incidents in the future.

After a highly charged battle between the hospital and his parents, 23-month-old Alfie Evans died in April 2018 when doctors in Liverpool, in northwestern England, withdrew life support.

His parents, who had the support of Pope Francis, wanted to take him to a clinic in Rome but lost a final court appeal just days before he died.

Charlie Gard, born in August 2016 with a rare form of mitochondrial disease that causes progressive muscle weakness, died one week short of his first birthday after doctors withdrew life support.

His parents had fought a five-month legal battle for him to be taken to the United States for experimental treatment.

His case drew broad sympathy, including from then US president Donald Trump and Pope Francis, while 350,000 people signed a petition demanding he be allowed to go to the United States.

Such cases are always fiercely contested, and the involvement of religious groups can make decisions all the more difficult for family and friends.

Archie’s doctors argued in court that he was almost certainly ‘brain dead’ and further treatment was not in his best interests. They said Archie had suffered ‘irreversible cessation of brain stem function’ and had died at the end of May.

But his family disagreed: Hollie described Archie gripping her hand, opening his eyes and even crying. Doctors ran tests in the wake of this but found no improvement in Archie’s condition.

Archie’s mother previously said: ‘I know I’ve done a very good job being Archie’s mum. Based on my own childhood I was determined to be as good as a mother as I can possibly be and I feel like I have done that to the very best of my ability. It’s one of the reasons I am here.’

April 7 – Archie is found unconscious by his mother, Hollie Dance, at her home in Southend, Essex. He has a ligature around his neck, prompting her to believe he was taking part in an online challenge gone wrong. The boy is taken to hospital with traumatic head injuries.

April 26 – Barts Health NHS Trust, responsible for Archie’s care at the Royal London Hospital, begins High Court proceedings seeking to undertake a test of the brain stem – which is responsible for keeping people alive – and to withdraw mechanical ventilation.

Doctors think it ‘highly likely’ that the youngster is effectively dead, and say it is in his best interests that life-support treatment should stop. Archie’s parents, Hollie Dance and Paul Battersbee, raise concerns.

May 13 – High Court Judge Mrs Justice Arbuthnot rules that a brain stem test would be in Archie’s best interests.

May 16 – Two specialists attempt a nerve stimulation test on Archie, but no response is detected.

June 6-8 Mrs Justice Arbuthnot, sitting in the Family Division of the High Court, oversees three days of evidence and argument relating to Archie’s treatment. Doctors think it is ‘very likely’ he is ‘brain-stem dead’. Lawyers representing Archie’s family say his heart is still beating and want care to continue.

June 20 – Ms Dance and Mr Battersbee are granted permission to appeal against the decision.

June 29 – At the subsequent hearing, three appeal judges rule that evidence relating to what is in Archie’s best interests should be reconsidered by a different High Court judge. Archie’s parents say they are ‘delighted’ at the decision.

July 11 – High Court judge Mr Justice Hayden hears evidence from doctors that continuing to treat Archie will only ‘delay the inevitable’. But the boy’s mother says her son is a ‘natural-born fighter’ and urges doctors to continue care.

July 15 – Mr Justice Hayden rules in favour of the hospital trust, saying the medical evidence is ‘compelling and unanimous’ and paints a ‘bleak’ picture. He adds: ‘There can be no hope at all of recovery.’ Archie’s parents say they will ask Court of Appeal judges to overturn Mr Justice Hayden’s decision.

July 21-22 – Sir Andrew McFarlane, president of the Family Division of the High Court and the most senior family court judge in England and Wales, Lady Justice King and Lord Justice Peter Jackson are told during a two-day hearing that medical evidence shows Archie is in a ‘comatose state’.

July 25 – The three Court of Appeal judges rule that doctors can lawfully stop providing life-support treatment to Archie. Again, the family announce plans to appeal to the European Court of Human Rights.

July 28 – Archie’s family fail to persuade the Supreme Court to intervene in the case.

July 29 – Undeterred, the family make a ‘last-ditch’ application to a UN committee to step in.

July 31 – The hospital caring for Archie says his treatment is due to be withdrawn on August 1 at 2pm. However, it is confirmed that the Court of Appeal has granted a virtual hearing for 11am on August 1 after the UK Government asked it to ‘urgently consider’ a request from the UN committee to continue his treatment so the committee could examine his case.

August 1 – The Court of Appeal rejects a request to postpone stopping Archie’s treatment. It says his life-support care will end at midday the following day.

August 2 – Archie’s parents are refused permission to appeal against the latest ruling at the Supreme Court. Ms Dance says Barts Health NHS Trust will begin to withdraw Archie’s life support on August 3 at 11am unless the family have submitted an application to the European Court of Human Rights by 9am that day. The trust will not begin removing life-support until all legal issues have been resolved.

August 3 – The European Court of Human Rights refuses the last-ditch application. Archie’s family say they intend to ask the High Court to allow the schoolboy to be moved to a hospice.

August 5 – Mrs Justice Theis rules it is not in Archie’s best interests to be moved to a hospice. The High Court judge refuses the family permission to appeal against her ruling, granting a stay on the withdrawal of Archie’s treatment until 2pm on Friday to allow them to go directly to the Court of Appeal.

Refusing permission to appeal, the Court of Appeal judges say Mrs Justice Theis’ ruling dealt ‘comprehensively with each of the points raised on behalf of the parents’ and said the proposed appeal had ‘no prospect of success’.

Archie’s family is told his life support will be withdrawn at 10am on Saturday, campaign group Christian Concern says.

August 6 – Archie’s mother Ms Dance tells reporters outside the hospital that her son died at 12.15pm on Saturday, after life support treatment began to be removed at 10am.

She said she was ‘the proudest mum in the world’, adding: ‘He was such a beautiful little boy and he fought right until the very end, and I am so proud to be his mum.’