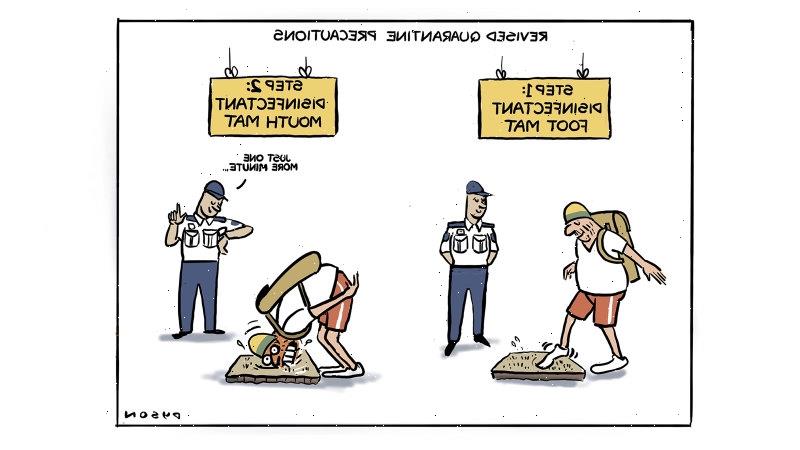 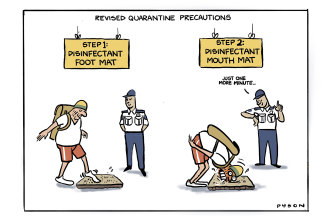 Arguments about ceilings and floors are not relevant
All the arguments about whether Labor’s 43 per cent emissions reduction target is a floor or ceiling are irrelevant. What matters most are the policy decisions centred on renewable energy, phasing out fossil fuels use (rapidly), and reducing large-scale pollution.

If the government allows the proposed gas projects at Narrabri and the Beetaloo Basin and new Queensland coal mines to proceed, all the positive decisions on renewables, etc, will be wasted. Our emissions will not reduce to 43 per cent by 2030, and the state of our environment and the planet will become even more parlous.

Current events in Europe, and all the climate science evidence gathered, demonstrate that this is an emergency. This government needs to spend on appropriate infrastructure development, and do it now. There is a past decade of wasted time and inappropriate spending to make up for, and we don’t want to see it repeated by approving more gas and coal projects.
Peter Holmes, Lima East

The immediate course of action
Your letters pages (21/7) and editorial (20/7) focused on the need for urgent action on the environment.

While a comprehensive plan would be wonderful, the science and some joined-up thinking shows us the immediate actions that should be taken.

First, there should be no new or expanded fossil fuel projects. Our Pacific family need this badly, and we can bear any short-term pain involved. Second, all logging of native forests must cease now. Third, there must be just transition plans for workers in the industries concerned.
Ann Taket, Fitzroy North

This is not a political issue
Nicki Hutley rightly points out that looking after our world and having a strong economy are not incompatible (“Rich pickings from environment”, Comment, 22/7). In our personal lives we spend money on things like looking after our health and servicing our car to preserve our quality of life and ensure we don’t end up paying for massive corrective measures in the future.

As Hutley suggests, looking after our planet and its diversity is the only economically sensible thing to do even though it won’t be easy and may result in some short-term pain.

This is not a political issue that should divide us. It is a matter of analysing the environmental and economic data and responding accordingly in the best interest of future generations.
Graeme Lechte, Brunswick West

It’s not necessarily bad news
Your correspondent (“It’s too late to turn the ship around”, Letters, 21/7) is extremely negative about the future of Victoria’s forested environment. A more positive view is that regeneration of burnt forests will lead to very productive older forests as, for example, happened after extensive bushfires in 1939, 1983 and 2009.

While it is true that young eucalypt regrowth (10-40 years old) may burn more intensely than regrowth outside this age band, if it is properly protected from fires, it will grow on, capturing carbon and providing animal and plant habitat for many decades.
Peter Fagg, Blackburn

A ‘code’ will not suffice
The fact that, despite “egregious” behaviour identified by Operation Watts, nobody can be charged with any offence stemming from the political scandals in Victoria, makes it clear that we need more than a “code of ethics” or “integrity framework” to keep politicians honest.

Unless and until political corruption is clearly proscribed by law, with appropriately large penalties (including fines, jail and lifetime bans) we’ll continue to have this kind of behaviour and we shouldn’t expect anything better from our elected representatives who, despite their stage-managed appearances, seem driven to get away with anything they want.
Angus McLeod, Cremorne

Why the focus on her?
Why is it that women are expected to step back to allow the man to continue his career unabated?
The letter “This has been brewing for years” (22/7) seems to suggest Lizzie Blandthorn give up her new job as Planning Minister so her brother, the lobbyist, can continue his career.

Why not suggest John-Paul Blandthorn give up his position, find another job or move to another state? A government minister’s job is far more important than a lobbyist’s.
Lenore Frost, Essendon

Appoint someone else
How does Planning Minister Lizzie Blandthorn recusing herself from her brother’s projects avoid the fact the department she oversees will be dealing with those projects.

This lame attempt to present an image of integrity in the process falls well short of the obvious solution: appoint someone else to the position.
Peter Randles, Pascoe Vale South

The nature of the beast
The leadership “flaws” unfolding in the Victorian Labor Party are inevitable organisational results of what Robert Michels (1876-1936), the German-Italian sociologist defined as “the iron law of oligarchy”.
Power in an organisation ends up in the hands of few, even if it begins with democratic aims.

Michels’ era, of course, saw the worst outcomes of dictatorships exercising extraordinary power in the hands of the few, but his observations, in far different circumstances, are still applicable today. Constant scrutiny of leadership cliques has to be a given and be as basic as opening curtains in the morning to let in the sunlight.
Des Files, Brunswick

This land is important
Years ago, warnings of future problems with the sale of market garden lands close to Melbourne for the development of housing estates fell on deaf ears.

Now, with supply chains across the nation being compromised by the effects of climate change, we can only be grateful that some of the famed market gardens of Werribee and Werribee South have survived. The produce of these areas will help to support us as production ramps up in the warmer months.

Now that we are better informed about the consequences of the effect on urban communities on the loss of these areas, future planning decisions concerning arable areas close to cities should be considered with the benefit of hindsight and greater wisdom.
Loucille McGinley, Brighton East

Regulation lagging
I agree with your correspondent (“The case for mandates”, 22/7) that dealing with the pandemic, like motor vehicle use, should be regulated, and not left to individual measures.

Fortunately, vehicles were regulated last century, before “move quickly and break things” became the accepted norm. Regulation now lags far behind where it is needed. Some recent examples are e-scooters, the gig economy and facial recognition.

Not a pretty picture
The environmental report just released (cynically delayed by the previous government in political survival desperation mode) reinforces the difficulty of maintaining optimism for the world my young grandchildren will inherit.

Despite scientific knowledge of the preventive action necessary, and decades of expert warnings, business as usual prevailed, simply because every potential change threatened some or all of power, privilege, money or convenience for some group or other.

As predicted, those actions are now many times more urgent, difficult, disruptive and expensive for any hope of arresting, let alone reversing, climate change and ecosystem degradation.

Those who cannot afford those sacrifices are unable to make them; those who can, especially the most addicted to power, are still unwilling.

Unless a miraculous epiphany enlightens global political and economic leaders at macro level as well as state and local government and each one of us at micro level, it would seem that within a few generations of increasingly dystopian existence, not only our goose, but other animals, including ourselves, will be cooked.
Joe Di Stefano, Geelong

The stables need cleaning
Are fellow Australians ready for a concerted push for more honourable behaviour from all parliamentary representatives, and of those who sail with them? Will we seize this timely moment to demonstrate concern about the downward slither of our democracy?

Whether it’s at federal level – with blatant pork-barrelling, trough-snuffling, corporate capture, jobs for cronies – or chicanery in party factions and local branches, the stink tells us that the political stables need a massive clean-out.

We know where we don’t want our country to go – riots in parliaments and palaces, tyrants rising, polarisation splitting the nation and paralysing progress. We know of flourishing social democracies too.

Australia has civil-society organisations offering sound models for reform, and now independent MPs who back such reforms. Not just for an institution to root out criminal corruption, but for institutional oversight that stops political culture falling shamelessly to the lowest common conduct – because “everybody does it” – and, once in power, all sides can do it with impunity.

Which honourable MPs will grasp the opportunity to stop the slither?
Jackie Yowell, Glen Iris

There is a precedent
Fifty years ago, all of our red rattler trains had “smoking” and “no smoking” carriages. Maybe we should try “mask” and “no mask” versions of this idea (“Time for a rethink”, Letters, 22/7). No mandates needed, it’s your choice for whatever reason.

From memory, few if any smokers violated the rule, and those who did were promptly stared down until they moved to the right carriage.

Perhaps a small on-the-spot fine would help get the message across, with the proceeds going towards emphasising responsible social behaviour. A quick paint job and some stand-out lettering would have the scheme up and working in no time. Worth a try?
Peter Dodds, Montmorency

Some inroads into this problem would have been achieved if the Labor Party had won the 2019 election but the backlash against that policy was so loud that Labor has been scared off making the change that is needed.
More assistance to the negative gearers will be delivered if the 2023 tax cuts proceed. I don’t believe there is a god, but someone needs to help us.
Judy Kevill, Ringwood

The grey area
There is a wide space between doing what is right and committing a crime. This space is filled with behaviour which can be assessed ethically.

Adem Somyurek seems to be unaware of this grey area. In saying he has been exonerated and raising distractions he either thinks that he did nothing wrong or cannot accept that he did.

Anything done in the interest of political parties rather than the whole community raises a question as to whether the behaviour is right or ethical.

We have seen too much unethical behaviour both in state and federal politics.
Denis Robertson, Windsor

Politics
To reach the moral high ground, littered with toxic political debris, both the premier and the opposition leader should grab sturdy new brooms and sweep like fury.
Mary Cole, Richmond

To show how open they are and their integrity as members of parliament, maybe every time they have a meeting with lobbyist, industry, union groups, etc MPs could put it up on their website in real time and give the reason for the meeting.
James Lane, Hampton East

Daniel Andrews, it’s time to go. If you knew of the misadventures of the Labor Party, you are complicit, and if you didn’t know, you failed as a leader.
Gary Bryfman, Brighton

“Premier vows to fix Labor’s sorry mess” (The Age, 21/7). Really? To all of us hapless onlookers, he appears to be part and parcel of it.
Anne Willett, Surrey Hills

So glad you got a good job, Josh. Just a pity you didn’t do one.
Tony Haydon, Springvale

When it comes to the new planning minister, Dan Andrews appears to have lost the plot.
Dorothy Opat, Elsternwick

Politicians could do something really genuine and honest: stop taking the oath when being sworn in.
Gerry Lonergan, Reservoir

The Reserve Bank
Arguably, the decisive Reserve Bank error that encouraged many to overborrow, was the bank reducing interest to such unnaturally low and unsustainable levels.
Malcolm McDonald, Burwood

Furthermore
With another potential disaster lurking in the form of foot and mouth disease, have we not learnt anything from COVID? Go hard, go early.
Anthony Palmer, Southbank