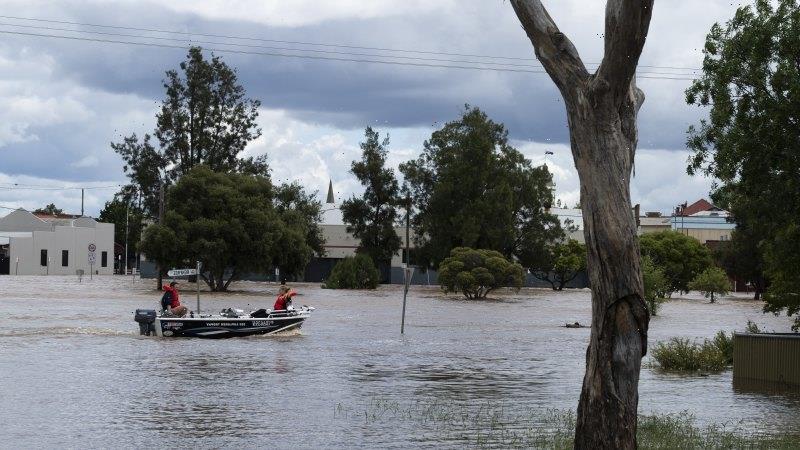 Our live coverage of the extreme weather is free for all readers. Please consider supporting our journalism with a subscription.

SES warns of ‘summer of floods’

That concludes our live coverage of the flooding in the Central West for today. I will leave you with chief reporter Jordan Baker’s latest report.

The State Emergency Services chief warns NSW faces a summer of floods that will echo the summer of bushfires, as record volumes of water threaten to repeatedly inundate towns.

Commissioner Carlene York said three years of La Nina rain had left the state sodden and vulnerable to floods, just as years of drought created a parched tinderbox before the deadly fires of 2019-20. “We’ll be in floods for months,” York told the Herald.

Explore our full coverage of the NSW floods here.

Herald photographer Rhett Wyman was in Eugowra on Thursday.

The town’s Rural Transaction Centre, which offers banking and postal services, was destroyed in the flash flooding on Monday. It was the only option for post after the local post office was sold in 2013. 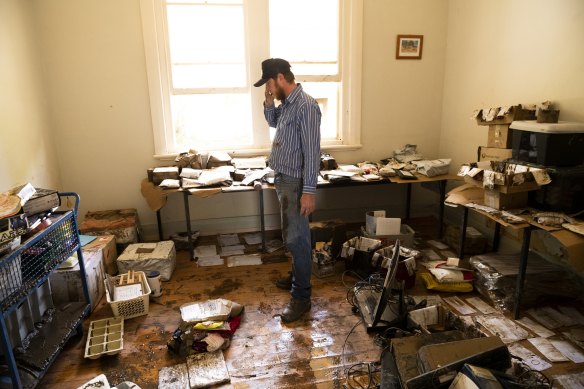 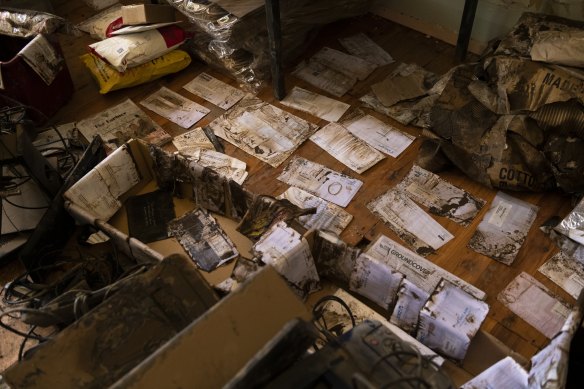 The town’s newsagency and supermarket suffered a similar fate. 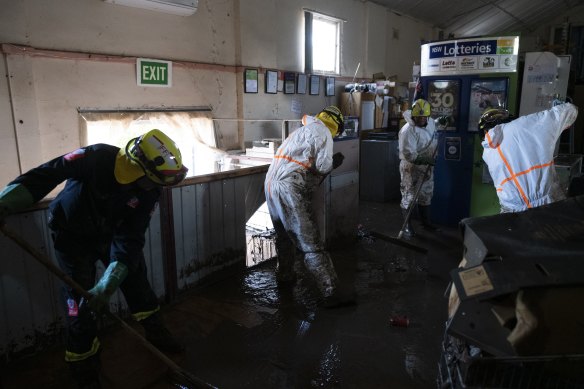 The Eugowra Newsagency and Supermarket on Thursday.Credit:Rhett Wyman

The Bureau of Meterology has issued an updated forecast for the Lachlan River. It expects the major flood peak now passing through Forbes and Cottons Weir to remain into Friday, and above the major flood level through the weekend.

The Lachlan was measured at 10.67 metres at Forbes Iron Bridge on Thursday afternoon and expected to rise and remain at 10.7 metres on Friday, before settling at 10.55m during the weekend. 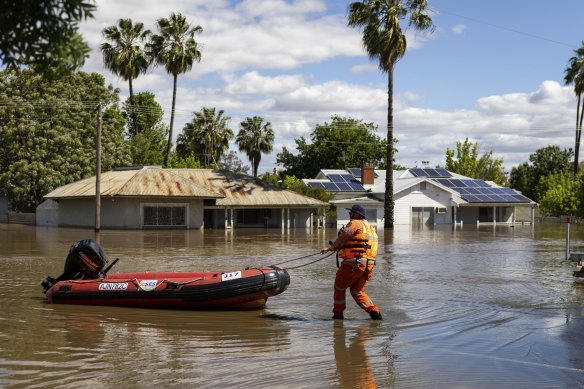 At Cottons Weir, the river was measured at 7.40 metres, where it is predicted to remain on Friday before falling to 6.60 metres through the weekend.

River levels could still rise downstream of Jemalong Weir, which itself is predicted to peak at about 8.50 metres on Friday morning. Further rises could also occur in Condobolin on Monday; it is currently at 7.40 metres.

As previously mentioned, river levels at Euabalong have already surpassed the infamous 1952 event – but could go even higher in a week’s time when the peak water at Jemalong makes its way down the river.

Behind the lens documenting NSW’s floods

Chief photographer Nick Moir has specialised in environmental and meteorological events such as storms and bushfires for 20 years. He shares his experiences covering the NSW floods and the pictures that tell the story on the ground.

Three years ago, environmental and weather factors screamed that NSW was entering a fire season on a scale unseen. Now, those same factors are stacking up in the reverse. The Bureau of Meteorology has issued severe storm and river flood warnings.

I’ve been watching our rivers bleed out over the landscape, some with multiple major flood pulses along their lengths. The unpredictability of the storm system threatens areas with potential flash floods.

The entire state has experienced major floods and Herald photographers, such as my colleagues Rhett Wyman and Brook Mitchell, are committed to telling the stories of people suffering in these disasters.

Water going nowhere for the weekend

The Lachlan River at Condobolin was measured at 7.41 metres on Thursday morning – higher than during the infamous 1952 flood often spoken about as a benchmark during this flood event. The Bureau of Meteorology has predicted the river could reach as high as 7.60 metres at Condobolin Bridge on Saturday.

The 1952 flood levels have also been surpassed at Cottons Weir and Euabalong.

In Forbes, the major flood peak is expected to remain at about 10.70 metres at Forbes Iron Bridge into the weekend, as locals contend with deep water through their homes and are ferried about town in boats.

Our photographer Alex Ellinghausen is in Forbes and you can see some of his images, as well as aerial shots from the Nine helicopter, below.

Singaporean water rescue crews arrived in Sydney on Thursday and will be deployed to Parkes and Wagga Wagga to aid in coming days.

Fire and Rescue NSW welcomed 18 Singaporean personnel and will facilitate an induction before they head to the Central West.

A strike team, made up of a team leader and four specialist firefighters, also left Sydney for Parkes on Thursday to assist the State Emergency Service-led operation with flood rescues and evacuations. 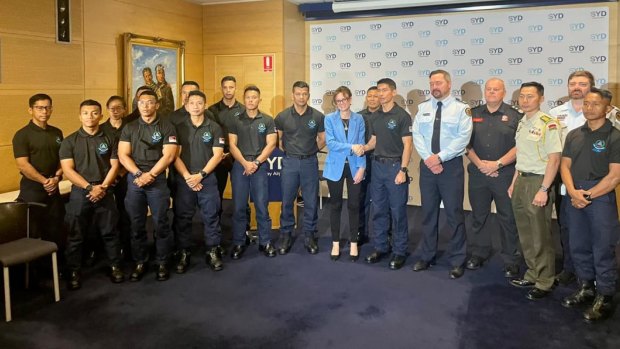 The Nine helicopter flew over the Central West this afternoon to survey the flooding.

Here’s a few photos from that flight that show the extent of the water at Condobolin, which is just north-west of Forbes. 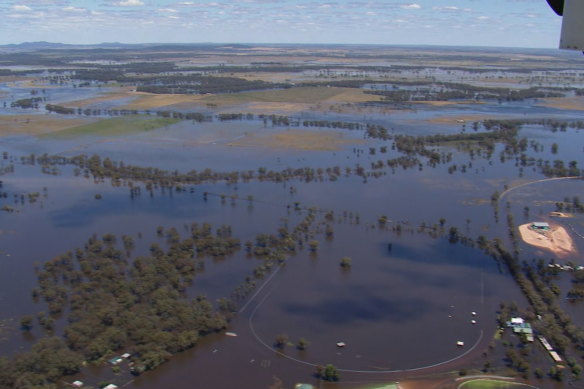 Aerial shots of Condobolin, north-west of Forbes, on Thursday afternoon.Credit:Nine 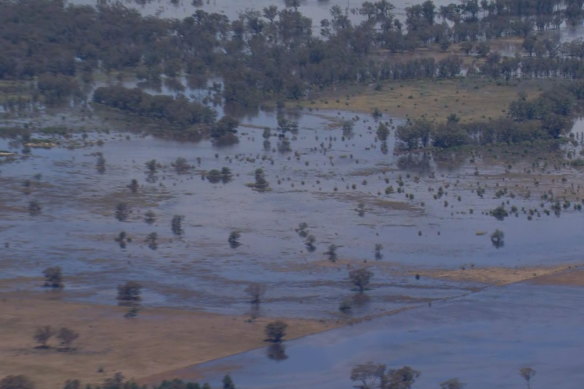 An aerial view over Ootha, just east of Condobolin, on Thursday afternoon.Credit:Nine

Police are appealing to the public after a body was spotted in floodwaters at Eugowra on Monday morning.

An officer was helping an elderly woman who was trapped in floodwaters when she saw the body of a man.

The police officer was unable to leave the elderly woman and she lost sight of the body.

She described the man as being aged in his 20s, of Caucasian appearance, with a slim build and fair hair.

“As there have been no further reports of people missing from the area, police are now making a public appeal to identify the person, while they continue to search the surrounding area,” a NSW Police statement said.

“After extensive inquiries with the community and despite a wide-ranging search of the surrounding area there have been no further sightings of the man, and no one matching that description has been reported missing.”

Police are still searching for missing 85-year-old Ljubisa ‘Les’ Vugec, who was last seen at his home in Eugowra about 9am Monday.

The body of missing 60-year-old Diane Smith was found on Wednesday, marking the first death of the current flood crisis. 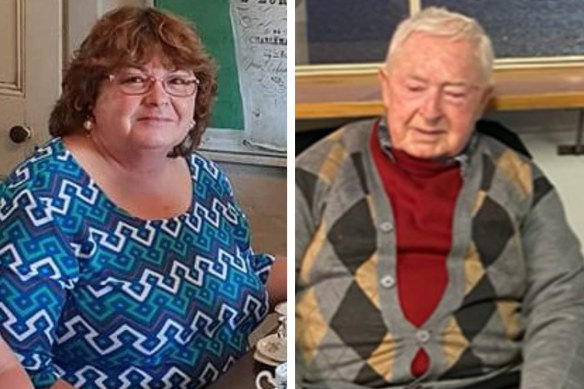 Diane Smith, 60, and Ljubisa “Les” Vugec, 85, who both went missing on Monday morning.

‘We can only adapt so far’: Parkes deputy mayor’s desperate call for aid

Parkes Shire Deputy Mayor Neil Westcott has voiced his concern over the region’s farmland, warning the damage to roads in the area due to the floods will badly affect the approaching harvest, which was due to occur in two weeks time.

Speaking to ABC News on Thursday morning, Westcott said the region’s farmers only had a third of the crop in this year – of which is now “very marginal” thanks to the recent floods. 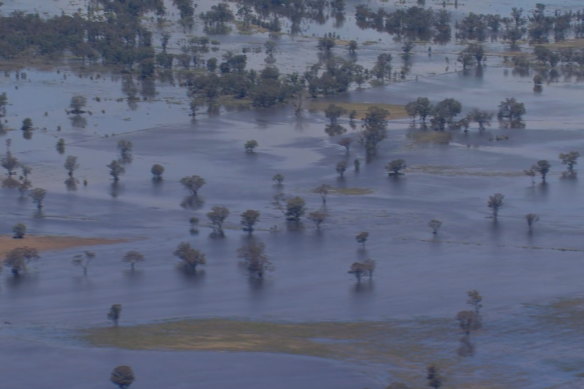 An aerial shot near Ootha in the state’s Central West taken on Thursday afternoon. Credit:Nine

“But of course, one of the great issues for all the farmers around the area is that our roads are pretty much destroyed,” he said.

“So with harvest approaching in the next couple of weeks, we’re not sure how we’re going to get our commodities to their end point anyway.”

In his role as deputy mayor, Westcott said local governments in the region simply did not have the resources to cope with back-to-back flooding events and called on both the state and federal governments to provide more financial aid to the region’s councils.

“Extremes are something of the norm that we are all having to adapt to, but as a farmer, we can only adapt so far. Going forward, we’re going to need a lot of assistance,” he said.

Westcott said there were about 250 residents in Parkes who had to evacuate on Monday morning with council assisting in the housing of around 30 families into temporary accommodation.

He said the town’s main access bridge was “extremely, badly damaged” and would take about six months to repair.

“The homes themselves can be repaired in Parkes, but it was a common story for people who slept through the rise of the water to hop out of bed and put their feet into water,” he said.

“I’m sure it’s rewritten the rule book in regards to where water levels can rise within that community.“

I’ve just spoken to senior meteorologist Dean Narramore to get an update on how that new weather system, which is expected to bring some more rain to the state’s Central West over the weekend, is shaping up.

Narramore said the storms are expected to be a lot weaker than originally thought, and said we should only see about two to five millimetres of rain in the region across Saturday and Sunday.

At worst, residents may see isolated rainfalls of up to 10 millimetres but overall the system is expected to hit Victoria and Tasmania a lot worse.

“It’s good news for NSW, but bad news for them,” he said.

He said any showers that do make their way to the Central West will be “very hit-and-miss”.

“It might go right over towns. It shouldn’t have a major impact,” he said.

A dry spell will come through the region starting on Monday, which will give residents some time to regroup. No rainfall is forecast the whole of next week.

“It’s looking good next week for clean-up,” he said.