This is the astonishing moment ‘Britain’s hardest cat’ was captured on camera chasing away a fox three times its size following a tense standoff over food.

Comical footage shows the brave cat leaping at it’s ginger rival after it had approached a bowl left on a doorstep in Dudley, West Midlands.

Homeowner Helen Fisher, 48, said she as left stunned at the fierce cat’s bullying antics when she watched back the video captured on her security camera. 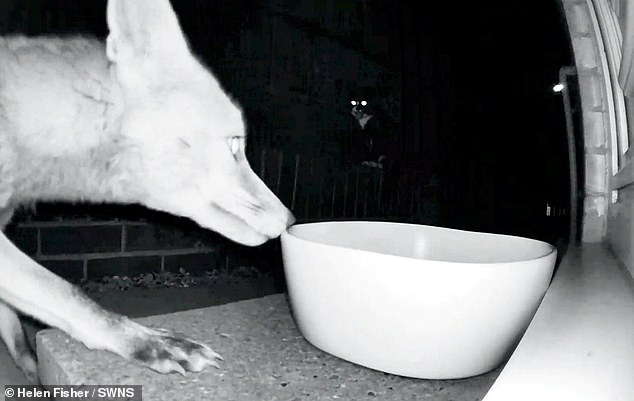 This is the moment a fox tries to steal food from a bowl outside a house in Dudley, West Midlands as the owner’s pet cat approaches 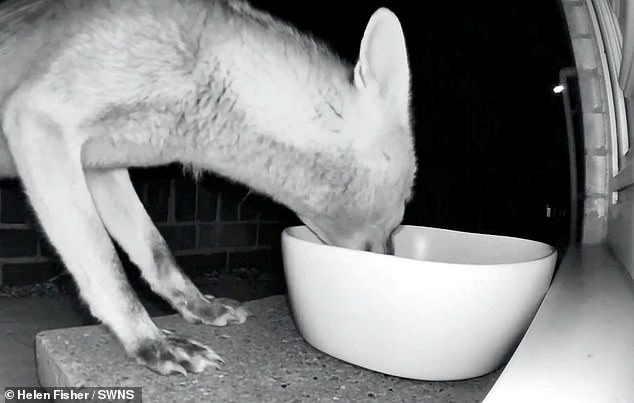 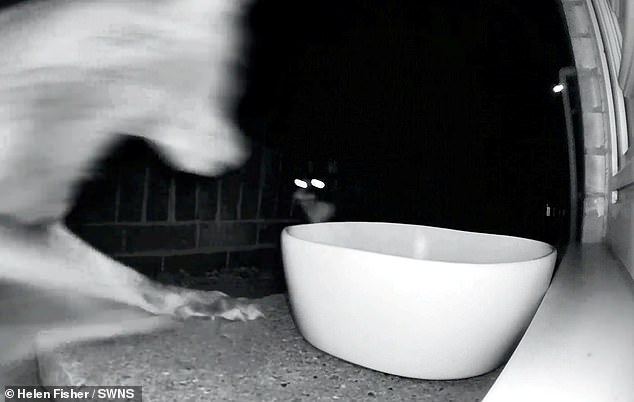 Train driver Ms Fisher had started leaving out dog food for the foxes last summer after noticing they were so hungry they were eating seed from her garden bird feeder.

But this unfortunate creature was unable to get a midnight snack after it was pounced upon as it went to tuck into some grub.

In the 35 second clip, the fox can be seen quickly scarpering away from the scene while being promptly pursued by the disgruntled hissing cat.

Ms Fisher said: ‘I don’t know whose cat it is but I get loads of them coming into the garden. My Ring doorstep camera just happened to capture it that night.

‘The fox and the cat are having a standoff while the poor fox is making that wooing sound they make to call to each other.

‘I’m sure it was a standoff over the food. It’s not a patch dispute over territory because the cat doesn’t live there.

‘It’s as if the fox is saying to the cat ‘I’m hungry, don’t hurt me’ as it makes a small move towards the bowl. 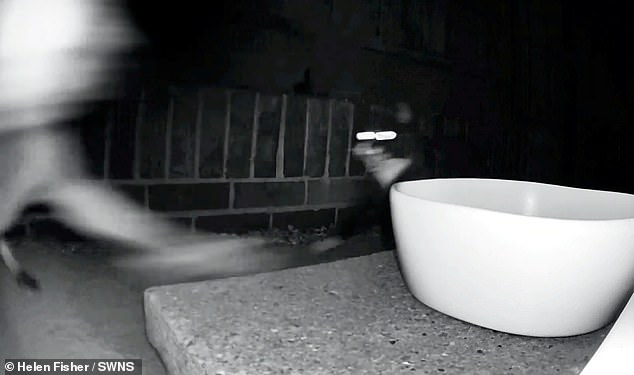 The smaller cat, pictured right, charged towards the startled fox forcing it to flee 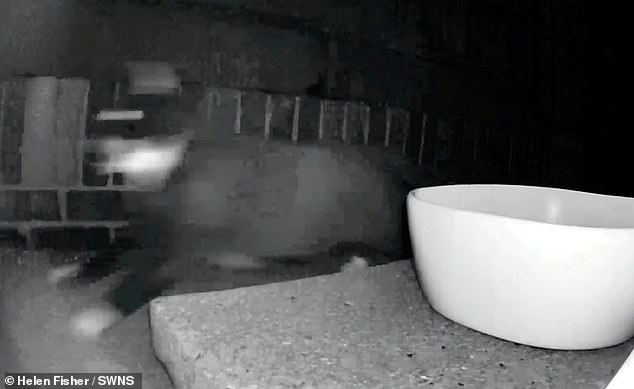 Ms Fisher added: ‘When I showed the video to my parents my dad jumped out of his skin when the cat suddenly shot across the screen’

‘You can also hear the cat hissing then the fox steps towards the bowl and the cat literally launches itself on the fox.

‘The fox must’ve been terrified because it gets out of there so fast. All of sudden the cat shoots across the camera at lightning pace.

‘I think this is the funniest, most amazing video I captured on the camera.

‘People think foxes are ferocious animals that prowl their garden and terrify pets.

‘But this video shows how our domestic pets can scare foxes because this cat is only a third of the size of the fox.

‘You can see how it throws itself at the poor fox which was absolutely petrified of that cat. The way the cat launches itself at the fox you just don’t expect it.

‘When I showed the video to my parents my dad jumped out of his skin when the cat suddenly shot across the screen.’

The footage was filmed back in June but has recently been uploaded to social media where web users have branded the mystery cat as ‘Britain’s hardest.’