It’s impossible to remember now, given all that’s happened since, but there was a time when Michael Vick revolutionized the NFL. Like Barry Bonds at-bats, you never wanted to miss a snap to Vick, because there was always a chance — a very good chance — you’d see something you’d never seen before. Young, dynamic, unapologetically Black, Vick galvanized the game, and the city of Atlanta had its own Michael Jordan.

But Vick brought it all down, and few, if any, were more shocked and disappointed than Falcons owner Arthur Blank, who’d spent years investing and believing in Vick.

Next week sees the release of “Good Company,” Blank’s combination autobiography/business philosophy manual, and it includes a dive into Blank’s mindset when he learned Vick hadn’t just known about dogfighting on his property in Virginia, he’d condoned, orchestrated and participated in it.

Blank, the co-founder of Home Depot, bought the Falcons in early 2002, less than a year after the team drafted Vick. For a time, the two men’s fortunes rose together. The city of Atlanta had grown indifferent to the perpetually underachieving Falcons; with the exception of an improbable Super Bowl run in the 1998 season, the team was often an anonymous schedule-filler, rarely on in prime time except as a designated opponent.

Vick changed all that, bringing flash, style and speed to a game built on seven-step dropbacks. He always seemed faster than anyone else on the field, including his own teammates. He outran everything, including the limits of his coaches’ creativity, and for a brief moment, Atlanta appeared poised on the edge of becoming the NFL’s next must-see franchise. Blank only added to that, freshening up the brand with a revitalized Georgia Dome, a new logo, and a renewed sense that pro football had a place in the college football-dominated South.

Vick and Blank formed an unexpectedly close relationship — too close, critics would say, when shots of Blank pushing the wheelchair of an injured Vick on the sidelines made the rounds. Blank didn’t care. He had a philosophy that had made him rich at Home Depot, and he brought it over to the next-man-up world of the NFL. 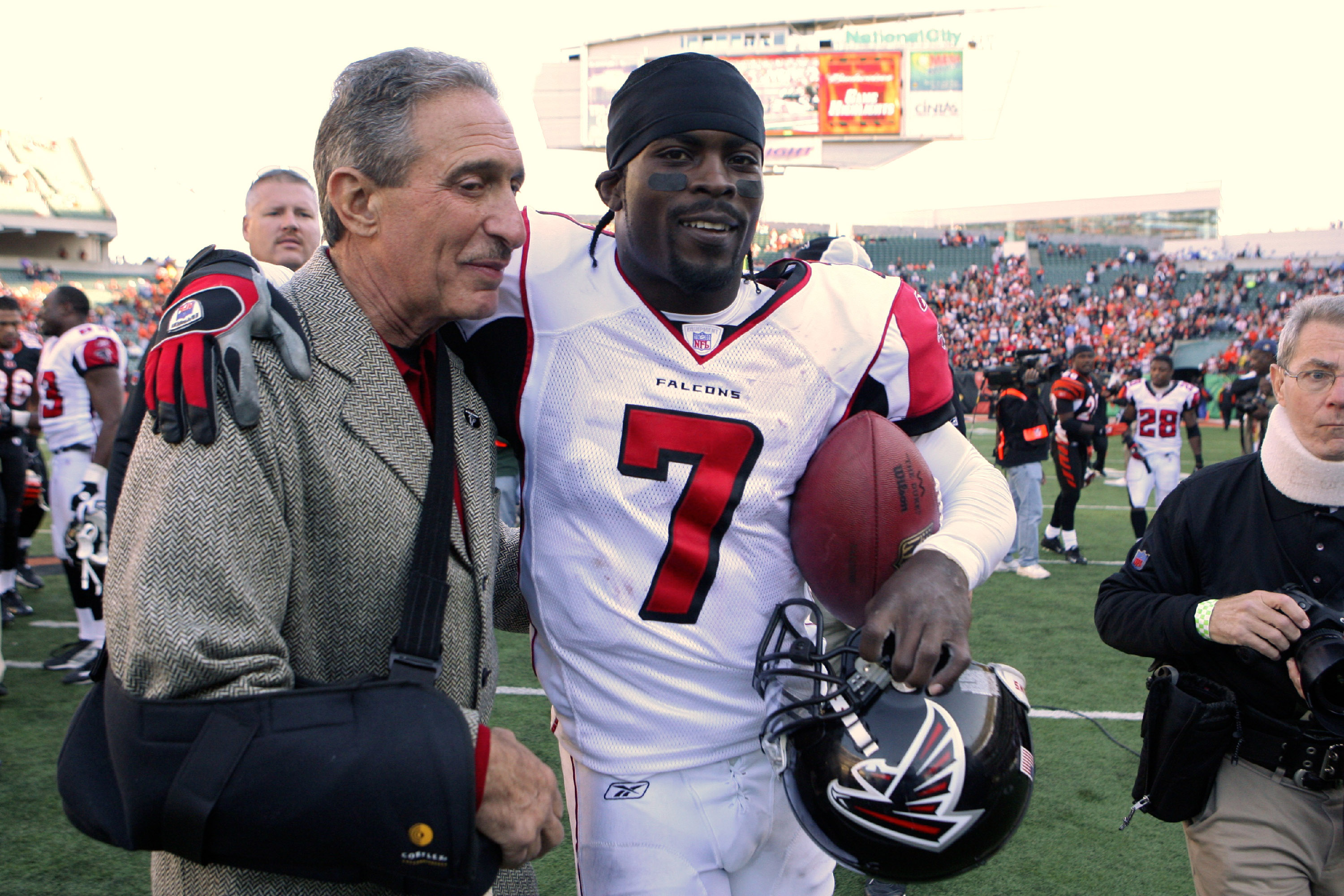 “For me, ‘Put People First’ means treating people as people,” Blank writes. “If I can’t get to know our players; learn about their passions, their histories, their families, and their hopes; and help them in any way that I can, there wouldn’t be a reason for me to own a team.” Blank writes that he mentored Vick on such diverse roles as being a father and starting a foundation, and believed he and Vick had a relationship that transcended employer-employee.

And then came the news of Bad Newz Kennels. When the story first broke, Blank spoke to Vick and asked point-blank if the reports of dogfighting were true.

“I knew Michael — or at least, I thought I did,” Blank writes. “I believed him to be a man of his word.” Blank left on vacation, but when he returned, he learned that the reports were true, all of them and more.

“I felt deeply disappointed and betrayed — both personally and for the franchise — when Michael’s shadow life came to light,” he writes.

Like everyone else, Blank had a simple question for Vick: why? Why risk a nine-figure contract, worldwide fame, a generational legacy for something so heinous?

“I never thought I’d get caught,” Vick told Blank, a line striking in both its arrogance and naivete.

Vick would go on to spend 18 months in jail, but he later returned to the league and played for several years for the Eagles, Jets and Steelers. He and Blank remained close, and three years ago Vick formally retired a Falcon in a small ceremony.

“I wasn’t ready to turn my back on him, however disturbing his actions were to me,” Blank writes. “I believe in redemption and second chances, and I wanted to give him the opportunity to show that he had learned from his terrible mistakes.”

While not letting Vick off the hook, Blank tries to take a longer view of how Vick ended up the way he did. “Young, superstar athletes are too often told they’re invincible, untouchable,” he writes. “Couple that giddy sense of sudden entitlement with the still-powerful momentum of an upbringing in one of the country’s poorest and most crime-ridden neighborhoods, and you can start to see where a talented kid like Michael goes off the rails. Intergenerational habits and attitudes are hard to break, and the bonds of family run deep.”

For many, Vick remains persona non grata; hundreds of thousands of fans protested his selection as Pro Bowl captain in 2019, and the mere mention of his name draws critics who will not forgive him for his past sins. Blank has chosen to stand by Vick, believing “it’s more important to acknowledge and support [personal] progress than to keep punishing the original ill.”

Most of the book recounts Blank’s business theories and philosophies, tied together with tales of his upbringing, early life and years as a Falcons owner. Some other football-related excerpts:

On his perception of the Falcons prior to buying them: “I used to say that in a league of 32 teams, they were 36th. But my gut told me the team could be turned around.

How he purchased the Falcons: By writing, “For Atlanta and the Falcons, $545 million. To the heritage and the tradition, in the past and in the future,” on a hotel napkin.

On protests: “Personally, I felt that the players were within their rights [to kneel] and the issues they were raising were important ones.”

On 28-3: “An incalculable equation of bad luck and unfortunate choices … I threw out all my Super Bowl LI gear — it was too painful a reminder.”