London: Prince Charles has described Australia's catastrophic bushfires as "an apocalyptic vision of hell" at a fundraising event which raised more than half a million dollars for the Red Cross in just four hours. 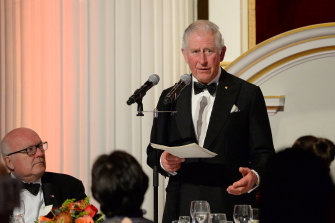 High Commissioner George Brandis watches Prince Charles make a speech at a dinner in aid of the Australian bushfire relief and recovery effort in London. Credit:Getty

But he also drew laughs when he recounted how on a trip to Australia in 1966 "after a very, very long flight" he was sprayed in accordance with Australia's strict biosecurity laws. "By the end of this process I thought 'do these people really want me here'?" he said, to laughs.

He recounted a subsequent trip where a group of Australians greeted his entourage by asking "Who are you?" only to continue "oh it's the bloody bludgers!'" the prince said, adopting an Australian accent.

He urged those attending to donate generously. Australia's High Commissioner to the UK George Brandis revealed the prince had personally made "a substantial private donation" to an Australian charity helping Australians recover from the devastation.

The novelist Lord Archer was the auctioneer and he extracted nearly £100,000 ($198,000) for items donated, including a couture dress by designers Ralph & Russo, business class flights and tickets to every match from Qantas and Cricket Australia, a private box at the Royal Albert Hall, lunch with and a personalised portrait by Barry Humphries and a backstage tour of Her Majesty's Theatre in London with Phantom of the Opera star Josh Piterman. 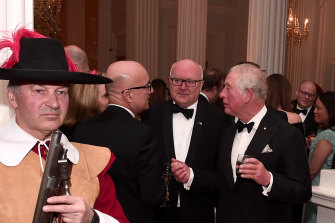 Prince Charles and George Brandis speak with another guests at the exclusive event. Credit:Getty

Melbourne-born Piterman, the widely acknowledged star of the night, sang Music of the Night and The Prayer at the event which was hosted by comedian Adam Hills, who capped off the evening singing the national anthem to the tune of Jimmy Barnes' Working Class Man.

Lord Archer revealed that Rupert Murdoch had phoned him that morning to lodge a bid worth £15,000 for a small Russell Drysdale watercolour.

But Murdoch was immediately outbid by a buyer in the room when the media mogul was revealed as the bidder.

It is estimated that between ticket sales, a silent auction, private donations and the public auction the event raised more than half a million dollars. 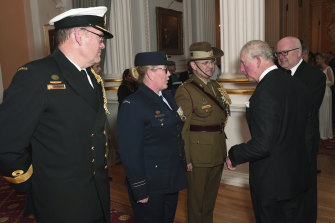