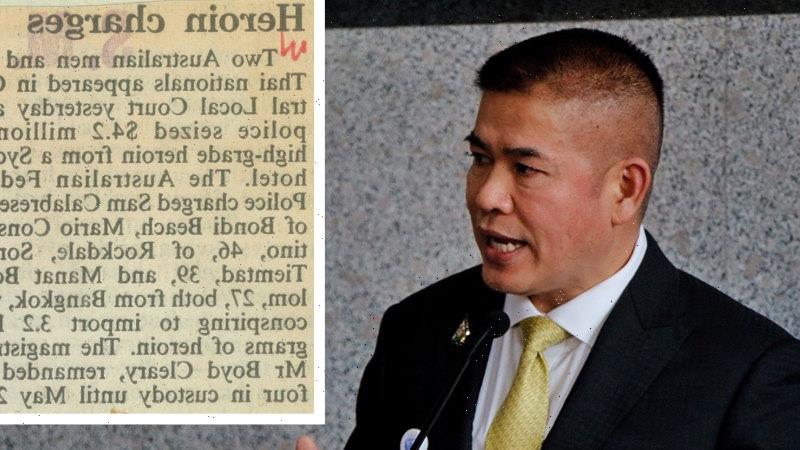 Thailand’s highest court has allowed the minister who pleaded guilty to conspiring to import heroin into Australia to keep his cabinet post, ruling his four years in a Sydney jail is not a breach of the constitution.

The Constitution Court on Wednesday ruled that while Thammanat Prompao had admitted to his Australian conviction, the extent of which was first revealed in The Age and The Sydney Morning Herald, the Thai court could not recognise the authority of another state. 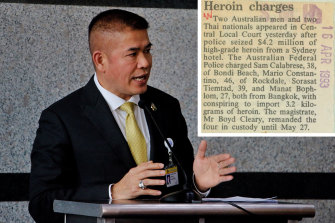 Thai minister Thammanat Prompao and a 1993 Sydney Morning Herald clipping about his arrest in Sydney.Credit:Age archives

Thammanat, a key ally of top generals and an enforcer in the coalition cabinet, was a young soldier known as Manat Bophlom when he pleaded guilty in the NSW District Court to conspiracy to import a commercial quantity of heroin.

He was arrested in a Bondi hotel in April 1993, served four years in Parklea prison and was deported immediately on release. While in custody, he told Australian detectives and a prison chaplain about his connection to Thai royalty, including having worked as a bodyguard to then-crown prince now King Maha Vajiralongkorn.

In a statement to The Age and the Herald in 2019, a spokesman for Thammanat said “the unfortunate event” went through the Australian judicial system “where all parties were held accountable fairly and justly”.

Court documents reveal the police had intercepted heroin hydrochloride with 74 per cent purity, amounting to a touch over 2.3kg of heroin. Surveillance material captures Thammanat saying he was with the courier in Bangkok when she packed the drugs.

Thammanat has faced down two no-confidence motions in Parliament. In the first, he survived but received fewer votes of confidence than other ministers facing censure; in the second, on February 20, he received more support than the Prime Minister.

On return to Thailand he resumed a career in the armed forces, which was interrupted when he spent three years in custody as a murder suspect before being acquitted.