The widow of a top banker who is locked in a legal battle with his two daughters over his £7million fortune said their lack of ‘respect’ and ‘gratitude’ made him feel like Shakespeare’s King Lear, a court has heard.

Tony Shearer, the former head of merchant bank Singer and Friedlander and finance governor of Rugby School, died at 68 in October 2017 from a brain tumour.

Following his death, almost all of his fortune was left in the hands of their stepmother, with nothing in his will for his daughters – Juliet, 40, and Lauretta, 38.

They claim they are due ‘maintenance’ from their father’s estate to replace a ‘generous financial provision’ they had.

Late businessman Tony Shearer came to feel like Shakespeare’s King Lear because of the lack of ‘respect’ and ‘gratitude’ from his daughters Juliet Miles (left), 40, and Lauretta Shearer (right), 38, his widow has told a court

But according to stepmother Pamela Shearer, Mr Shearer dubbed one of his children ‘ghastly’ because of her demands for his money and eventually came to feel like King Lear, the High Court heard.

The tragic Shakespearean king went mad after being betrayed and undermined by his daughters.

‘I’m going to quote King Lear here: “sharper than a serpent’s tooth” is an ungrateful child – and that is how my husband felt,’ she told judge Sir Julian Flaux, who is hearing Mr Shearer’s daughters’ claim for maintenance out of his estate. 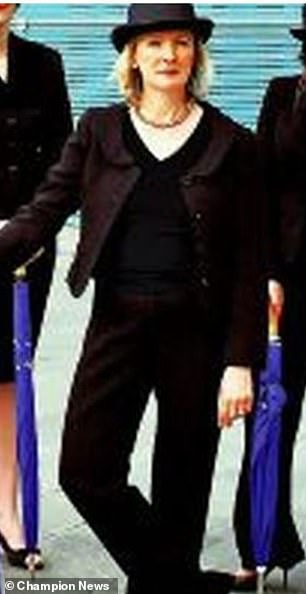 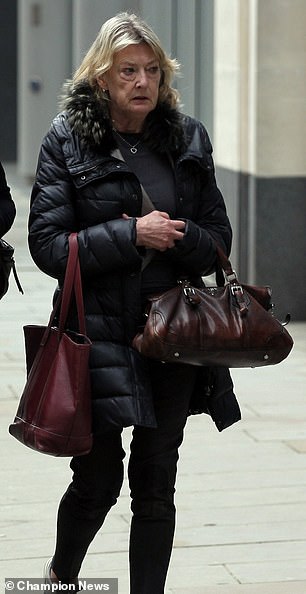 Stepmother Pamela Shearer (left) says they are due nothing and sees them as ‘entitled’ and ‘interested in their dad only for his money,’ the High Court was told. Right: Mr Shearer’s first wife Jenny Shearer, the mother of Juliet and Lauretta has been attending the case 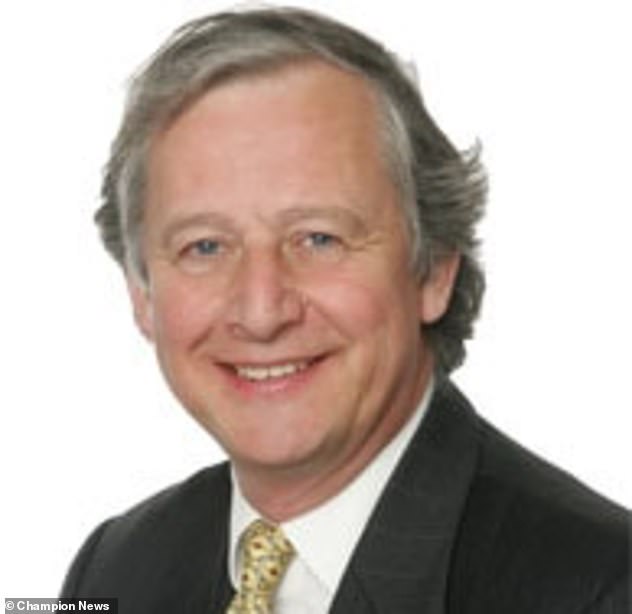 Following his death, almost all of his fortune – which Juliet and Lauretta put at around £7m – was left in the hands of their stepmother, with nothing in his will for his daughters.

Sisters Juliet Miles, 40, and Lauretta Shearer, 38, are now fighting for ‘maintenance’ from their dead dad’s multimillion pound estate to replace the ‘generous financial provision’ he gave them both whilst alive.

But their stepmother, marketing executive Pamela Shearer, 68, says they are due nothing and sees them as ‘entitled’ and ‘interested in their dad only for his money,’ the High Court was told.

The sisters are suing her for ‘reasonable provision’ from the estate, claiming that after he met Pamela their father unfairly left them high and dry after he had looked after them financially the whole of their lives.

Although his will left an estate worth £2,184,976 to Pamela, the sisters say that when other non-estate property including heirlooms and expensive wine are taken into account, their stepmother was left with almost £7m and so there is plenty to share.

They claim their father ‘changed’ when he married Pamela, with a rift forming so deep that he refused to walk Lauretta down the aisle at her wedding after he was told his new wife was not invited. 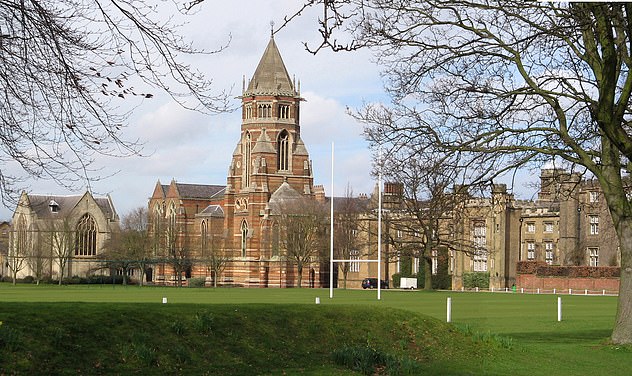 Pamela, giving evidence, told the judge that Juliet and Lauretta’s ‘repeated requests for money’ had been getting their father down before he made his will leaving everything to her.

‘There was an occasion when he and I had dinner with Lauretta, which was very nice. During the dinner, she made all kinds of allusions to what she and her then boyfriend couldn’t afford in the flat.

‘In the taxi back, Tony said to me: “Wasn’t she ghastly?”

‘I said ‘what do you mean?’ and he said: ‘She’s asking me for money again and I only just gave her this large deposit.’

‘Lauretta’s comment which was ‘oh I won’t be able to afford to live in Fulham’ when presented with a cheque for £185,000 by her father was pretty nasty or ungrateful.

‘He said he was going to write to her because of the incident. He wanted to manage her expectations (and)…demands for money,’ she told the judge.

‘I’m going to quote King Lear here: ‘sharper than a serpent’s tooth’ is an ungrateful child – and that is how my husband felt.

‘Parents deserve a bit of respect. Those two girls enjoyed a luxury lifestyle.

‘Of course Tony didn’t ask them for gratitude every five minutes, but I do think he was deserving of a bit of respect,’ she added.

But Lauretta in her evidence denied Pamela’s claims.

‘My parents were always of the opinion that if you tried and worked hard they would contribute. I was working as much as I could. Dad encouraged me to believe I’d always be able to rely on him financially. He continued to provide generous financial support well into my 20s.

‘He always said that if you were struggling in terms of a salary he would match it. All he wanted was for us to work hard.’

When it was put to her that her dad wrote that it was ‘a tragedy’ that she didn’t complete her classics degree in Newcastle, she replied: ‘He was disappointed, but he told me to go out and get a job, which I did, and he later told me he was very proud of me…he was very cross but he got over it.’

Blaming Tony’s relationship with Pamela for tensions between him and his daughters, Lauretta told the judge her father had ‘changed.’

‘Once Dad met Pam, it was almost impossible to see him alone. Support was abruptly cut off.’

Lauretta said she began to get ‘nasty emails’ from her dad after this, causing her ’emotional torment’.

‘Some of the stuff was really hurtful and I didn’t understand where it was coming from,’ she told the judge.

‘He started sending these letters and emails about demands for money which just didn’t happen.

‘It wasn’t like him to do this or say this.

‘I think Pam was involved in some of my father’s communications.

‘He would write these things, then the next day forget all about them. I think he was trying to set out his life for Pam and show that everything before didn’t matter.’

Around this time, Pamela sent an email to Mr Shearer’s daughters denying being ‘nasty, hypocritical or scheming’ and adding: ‘I have no influence whatsoever on what your father thinks, despite your opinion that we have formed some sort of evil alliance against the world.’

Of this, Lauretta told the judge: ‘I saw his behaviour change. When she says she has no influence on what he thinks or says I would strongly, strongly disagree with all of that.’

Lauretta then went on to tell the judge that she and her father fell out for several years after she told him Pamela was not invited to her wedding in November 2011.

Mr Shearer also had a ‘profound dislike and distrust’ of the man she was marrying.

Lauretta told the judge that she and her father met in a hotel in Green Park, where she told him she didn’t want Pamela at the wedding.

‘Then on the day of my wedding rehearsal he tells me, ‘I wont walk you down the aisle or give you away’. It was all over the place. It was the most emotionally charged thing.

‘I never wanted anyone but my dad to walk me down the aisle.

‘It’s fair to say we were both hurt.

‘He was saying awful things to me. He was always hurt and I was hurt. We loved each other.’

It was put to Lauretta that Mr Shearer branded her behaviour in relation to the wedding ‘disgraceful’.

‘If you look at his behaviour in the lead up to the wedding I’m not sure it can be said that I was the one who was disgraceful,’ she replied.

Pamela told the court that after attending the wedding, Mr Shearer was ‘deeply upset.’

‘When he came back from Lauretta’s wedding, he sobbed for a long time. He was traumatised,’ she said.

Father and daughter then didn’t see each other for four years until she told him she was separating from her husband in 2015, after which things changed again, said Lauretta.

‘Dad was wonderful. Really supportive, really sweet, in touch all the time, asking how he could help,’ she said.

‘We resumed a proper relationship. I’m not sure Pam was aware he was seeing me.’

They both intend to use the money for housing.

The hearing of the case has now concluded with judgment to be given at a later date.