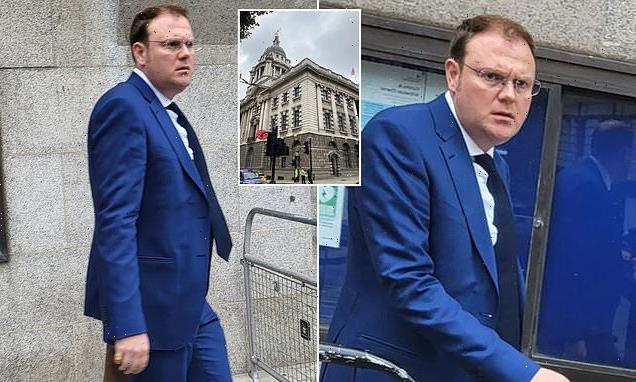 Barrister, 39, who chuckled after raping his Tinder date shouts ‘I didn’t do it… oh my God’ at jurors as he is convicted of the attack

A barrister who told himself ‘I shouldn’t laugh’ after he raped his Tinder date shouted ‘I didn’t do it’ from the dock as he was convicted of the attack today.

Robin Jacobs, 39, carried on the sex assault for up to 30 seconds in 2017 after the woman screamed at him to stop at his London flat, the Old Bailey heard.

The couple had been on two dates before the rape. After meeting for lunch at a date in September, the pair returned to Jacobs’ flat and had consensual sex.

But Jacobs suddenly forced her to take part in a sex act, ignoring her screams to ‘get out’.

He then told the woman, in her 30s, to ‘come for a cuddle’ and offered her paracetamol.

He denied raping the woman and said he would have stopped immediately if she had told him to, but was convicted of rape after a week-long retrial.

As the verdict was given, Jacobs began shouting at the court and proclaimed his innocence. 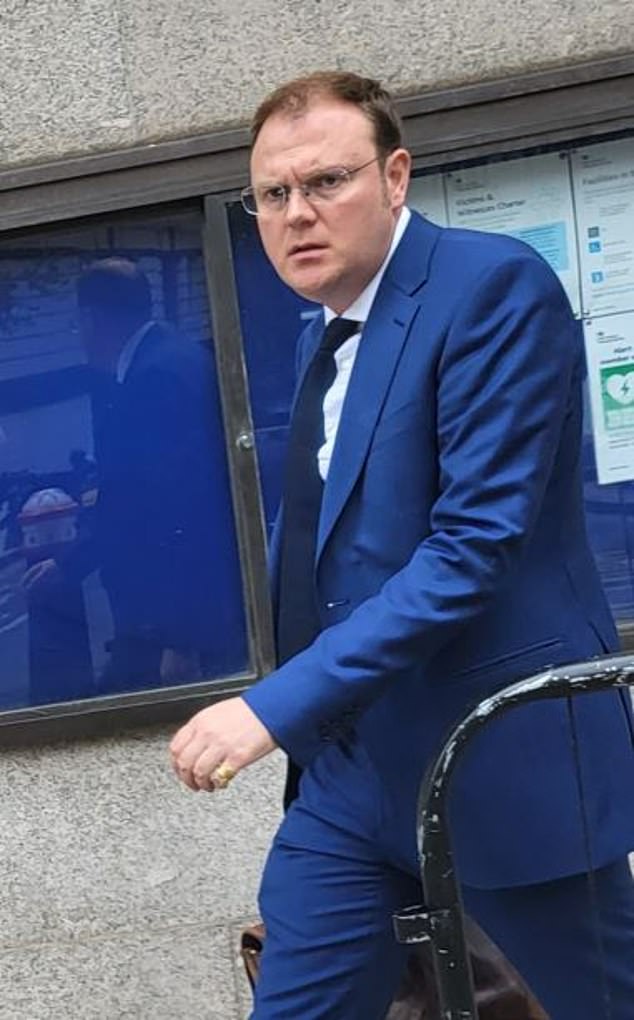 Barrister Robin Jacobs said ‘it’s not funny, I shouldn’t laugh’ after he raped a woman in 2017. The 39-year-old was convicted of rape at the Old Bailey today

The barrister was told to sit down by Judge John Hillen as the 10-2 majority verdict was announced by the jury of five women and seven men.

Jacobs then collapsed in the dock after the verdict was given following four hours and 47 minutes of deliberations.

The first jury had failed to reach a verdict against him and last week the Crown Prosecution Service decided to go ahead with a retrial.

Judge Hillen prevented reporting of the outcome of the first trial and left restrictions in place until the conclusion of the retrial.

On the day of the assault the pair went for a pizza then went back to Jacobs’ home nearby for sex.

At one stage Jacobs told the victim to wait there before attempting a sex act without consent, the court heard.

He carried on for 20-30 seconds until she screamed ‘get out’ at him, at which point he stopped.

As the complainant lay on the bed in front of him Jacobs said ‘It’s not funny, I shouldn’t laugh’.

He then chuckled to himself. 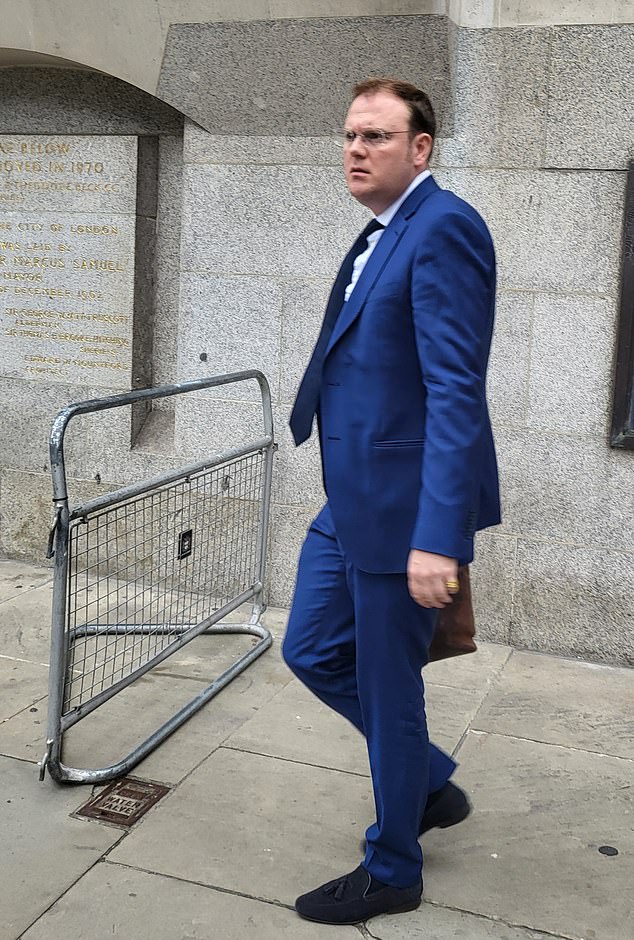 Jacobs denied raping the woman and said he would have stopped immediately if she had told him to, but was convicted of rape after a week-long retrial

In her account to police the woman said she told him to stop twice and he didn’t, she then screamed ‘get off’ and he stopped but he didn’t move away.

She said: ‘At that point I was just face down on the bed. I didn’t know what to do with myself – I was in quite a lot of pain.

‘And then he told himself twice that it wasn’t funny, that he shouldn’t laugh, not to laugh, and then after the second time he did laugh.

‘And then he saw that I hadn’t moved and then he sort of moved me across and sat down and said ‘come for a cuddle’ and I said no.

‘I would say that [he used] a huge amount of force. It felt like what you would describe as a stabbing pain.

‘It just wasn’t stopping. I was still in pain when I went into work on Monday.’

After the incident Jacobs texted a friend, Stewart Wallis, about the incident, calling the victim’s response ‘a bit of an overreaction’.

Jacobs also texted: ‘I just hope there’s no trouble as a result. I apologised repeatedly when she was here.

A few days later, Jacobs wrote: ‘I haven’t been nicked yet, so that’s good.

‘If the police are after you, do they leave a message or raid you at 5am?’ 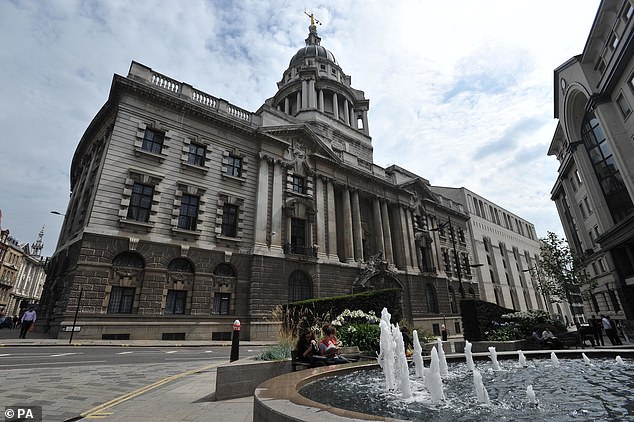 Jacobs shouted at the jurors in the Old Bailey today, claiming he ‘didn’t do it’, before collapsing in the dock

Jacobs claimed he was confused about what had happened and that he was trying to ‘fit in’ with his ‘laddish’ behaviour, which he uses to ‘navigate social interactions’.

The prosecution had suggested Jacobs’ ASD does not impact his understanding of consent and his reasonable belief of consent in this case.

Giving evidence during the first trial the barrister insisted he would have stopped having sex immediately if the woman told him.

Stephen Rose, defending, said: ‘It is suggested you were not interested in whether she consented.’

Jacobs replied: ‘It’s not true. I am not a cruel, aggression person. That is not what I’m like. It wasn’t something for my own gratification as the phrase goes. No.’

Jurors heard how the complainant claimed Jacobs had joked during their first sexual encounter: ‘It has been a while since I’ve forced myself into a girl’.

The barrister said he did not remember making that comment.

He said he understood ‘in the narrow sense’ that consent to one sexual act did not mean consent to another.

‘Based on everything I considered those boundaries to be wider in this instance.’

Jacobs denied that it was ‘very unusual’ for a woman to agree to such a sex act on the second sexual encounter but said: ‘I’ve done it on first dates.’

During the first trial Fiona Ryan, prosecuting, suggested his remark to the complainant to ‘hold steady’ before he performed the sex act was ‘no sort of warning at all’.

Jacobs replied: ‘It had been perfectly adequate when I had done it on previous occasions with other partners.

‘I don’t agree that there was no warning.

‘I can’t tell you five years on exactly what was going through her head…but I think she knew what I was going to do and she was alright with it until she was hurt.’

He told the jury in the second trial: ‘There was no thrusting. It was over pretty much as soon as it started.

Asked by his barrister Stephen Rose, if he raped the woman, Jacobs replied: ‘No.’

Jacobs said they were having sex and the woman suddenly shrieked at him to ‘get out!’

In his closing speech to the jury Mr Rose told jurors: ‘This is about a short relationship back in 2017, starting on Tinder between two mature adults both, it seems, looking for love.

‘I have no doubt that for some, if not all, of you, there have been parts of this trial that you’ve found distasteful to sit and listen to in the formality of this sort of setting.

‘And he discovers that in the contact of being accused of rape.

‘To discover that at his stage in life is nothing short of devastating.

‘He faces undoubtedly a very serious allegation and…his future is ultimately in your hands.’

The barrister specialises in educational law and has continued to practice since the incident, the court heard.

Jacobs, of Woodford, denied but was convicted of rape.