‘I’m not opposed to the justice, she seems like a very fine person,’ Biden said.

He did argue that her nomination put the future of Obamacare and the landmark abortion case Roe v. Wade ‘on the ballot.’

Barrett’s nomination was the first topic of the Cleveland, Ohio debate, which was riddled with insults and interruptions throughout the 90-minute span. 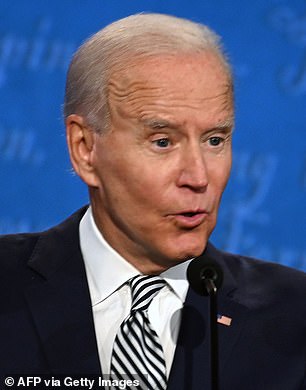 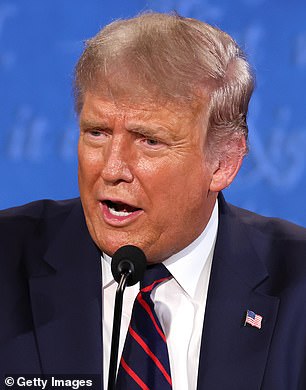 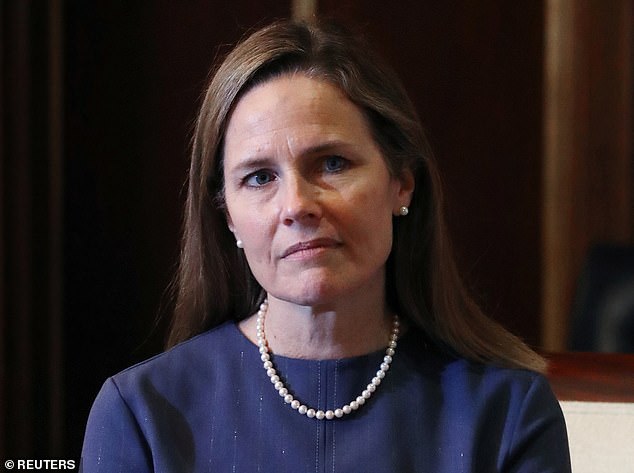 The topic of Judge Amy Coney Barrett’s nomination to the Supreme Court was the first subject to come up during Tuesday night’s first presidential debate in Cleveland, Ohio

Trump scoffed at Biden’s wording, after the vice president pointed out that abortion rights are now a campaign issue.

The ex-veep jumped in stating, ‘It’s on the ballot in the court.’

‘I don’t think so,’ the president shot back.

Biden then simply that said it’s ‘in the court.’

‘Donald would you just be quiet for a minute,’ Biden said as Trump continued to talk.

The president’s decision to go ahead and nominate Barrett and press Senate Republicans to give her a floor vote is controversial because in 2016 Senate Majority Leader Mitch McConnell wouldn’t do the same for President Barack Obama, who nominated Judge Merrick Garland in March of that year.

McConnell had seemingly set a precedent not to move Supreme Court picks during a presidential election year – until the White House and Senate majority represented the same party.

‘We won the election and therefore we have the right to choose her and very few people knowingly would say otherwise,’ Trump said on the debate stage. ‘And by the way, the Democrats, they wouldn’t even think about not doing it.’

Trump pointed to the example of Garland.

‘But the problem is they didn’t have the election so they were stopped,’ Trump said.

Democrats didn’t have a House nor a Senate majority in 2016 – but Americans had re-elected Obama to the White House in 2012.

Biden argued pushing a justice through now was even more unfair because people were already starting to vote.

Biden pressed the point that ‘we should wait.’