Atlanta: Israel, Austria, Switzerland and Argentina are the latest countries to identify local monkeypox cases, as Us President Joe Biden warned the sudden spread of the virus was something “to be concerned about”.

On Monday, AEST, the third US case was identified in Florida and another was suspected in the same state.

There are now at least 94 confirmed cases in nations where the virus was not endemic – Argentina’s case is the first sighting in South America and two cases were identified in Australia on Friday.

In his first public comments on the disease, Biden said: “It is a concern in that if it were to spread, it would be consequential.” 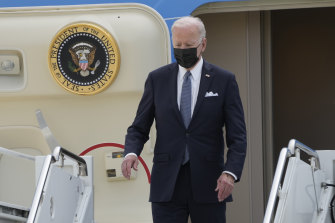 Joe Biden is being updated on monkeypox cases. Credit:AP

The president was asked about the disease as he spoke to reporters at Osan Air Base in South Korea, where he visited troops before taking off for Japan, where he will join a Quad summit with newly elected Australian Prime Minister Anthony Albanese.

“They haven’t told me the level of exposure yet, but it is something that everybody should be concerned about,” Biden said. He added that work was underway to determine what vaccine might be effective.

Jake Sullivan, Biden’s national security adviser, told reporters aboard the flight to Tokyo that the United States has a supply of “vaccine that is relevant to treating monkeypox”.

“We have vaccine available to be deployed for that purpose,” he said. Sullivan said Biden was getting regular updates on the outbreak.

Monkeypox, which mostly occurs in west and central Africa, is a viral infection that was first recorded in the Democratic Republic of Congo in the 1970s. Symptoms include fever, headaches and skin rashes starting on the face and spreading to the rest of the body.

It is spread by close contact, so it can be relatively easily contained through such measures as self-isolation and hygiene.

“What seems to be happening now is that it has got into the population as a sexual form, as a genital form, and is being spread as are sexually transmitted infections, which has amplified its transmission around the world,” WHO official David Heymann, an infectious disease specialist, told Reuters on Sunday.

Argentina’s health ministry said it had detected a suspected case of monkeypox in a Buenos Aires resident who had travelled to Spain, while Austria confirmed its first case in a tweet, adding that the male patient had tested positive for the viruse and, given his symptoms, it was safe to assume it was monkeypox. He was taken to a city hospital on Sunday with fever and skin lesions.

The as-yet unexplained spread of a virus beyond its normal borders has alarmed health authorities burnt by the coronavirus pandemic – but there are already vaccines that have been shown to be effective against the disease.

Studies suggest the smallpox vaccine is at least 85 per cent effective against monkeypox, according to the US Centres for Disease Control and Prevention, which notes that the United States has licensed two vaccines to prevent smallpox, with one being authorised specifically for monkeypox.

“This is not a new virus to us. We’ve known about this virus for decades,” Ashish Jha, the White House coronavirus response coordinator, told the US network ABC.

“This is a virus we understand. We have vaccines against it. We have treatments against it … It’s not as contagious as COVID. So, I am confident we’re going to be able to keep our arms around it.”