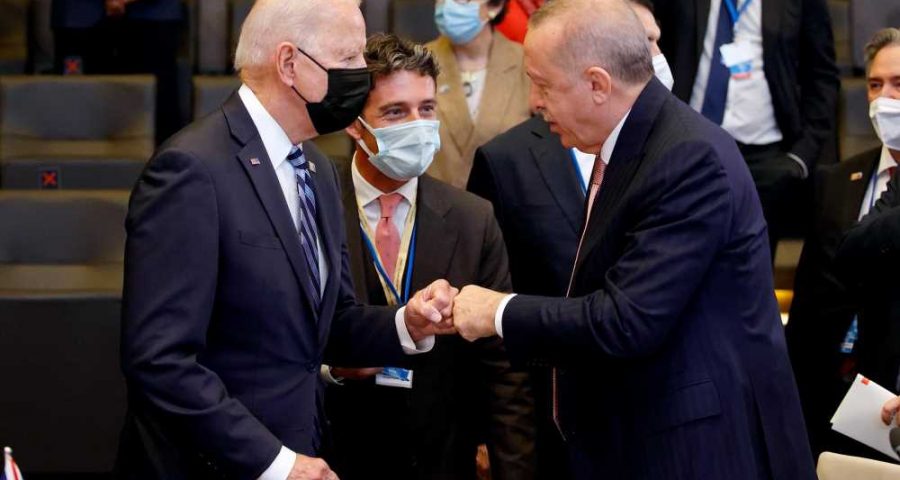 President Biden on Monday offered an awkward fist-bump to Turkish President Recep Tayyip Erdogan in Belgium at the annual NATO summit — as the Islamist strongman winds up to blast Biden for his recognition of the Armenian genocide earlier this year.

Biden, wearing a mask despite being fully vaccinated for months, approached an unmasked Erdogan, who was seated at a desk, and offered his fist at an angle that caught the Turkish leader off guard.

Erdogan rose to greet Biden, continuing the casual knuckle contact as they spoke. Later Monday, Erdogan and Biden will have a longer sit-down meeting.

The US-Turkish relationship has been roiled in recent years, including by Erdogan’s encroachment in Syria and Libya and his suppression of dissent following an alleged coup attempt in 2016.

In April, Biden recognized as a genocide the World War I slaughter of Armenians by Turks and Kurds, angering the Turkish leader. Last year, Biden called on Erdogan to abandon his decision to turn the Hagia Sophia, a former Christian church, from a museum into a mosque.

Ahead of the NATO summit, Erdogan made it clear that he would confront Biden over his stance on the Armenian genocide, saying the designation “disturbed and upset” Turkey.

“An ally country taking such a stance on an issue that has nothing to do with NATO, the issue of Armenians, has disturbed and upset us. It is not possible to go on without reminding (Biden of) this,” Erdogan said.

Although a NATO ally, Trump in 2018 ordered sanctions against Turkey’s interior and justice ministers over the detention of US pastor Andrew Brunson, who ultimately was released.

In 2019, Turkey attacked US-allied Kurds in northern Syria after Trump announced plans to draw down US troops there. Trump warned Erdogan not to be a “tough guy” or “fool,” but Erdogan ignored him and launched the attack.

In 2020, the US sanctioned Turkey for purchasing for $2.5 billion S-400 surface-to-air missiles from Russia.

The US has repeatedly refused Erdogan’s request to deport from the US the exiled Turkish cleric Fethullah Gulen, who Erdogan claims was behind the 2016 coup attempt.