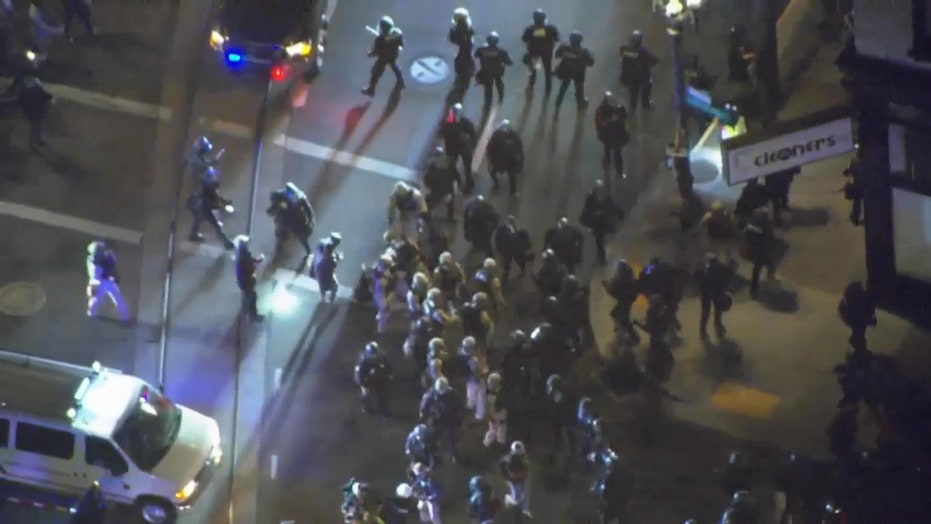 Aerial coverage of unrest in Portland, Ore., ahead of election call

Portland demonstrators identifying themselves as Antifa targeted a Democratic campaign office Sunday, shattering windows and spray -painting messages like “F— Biden” and “no presidents” on the building.

A group of people met in Laurelhurst Park Sunday evening before marching north and gathering in front of the Multnomah County Democrats building located in the 3500 block of Northeast Sandy Boulevard. 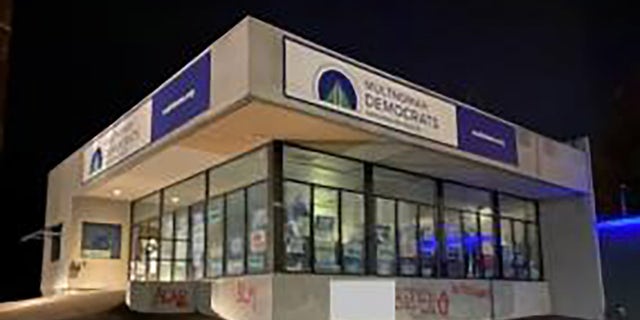 The Multnomah County Democrats building in Portland was left vandalized Sunday by a group of members appearing to identify as Antifa. (Portland Police Bureau)

Several members of the group began to tag the office with graffiti and broke out several of the building's windows, the Portland Police Bureau said in a press release. Police released several photos showing the damage. 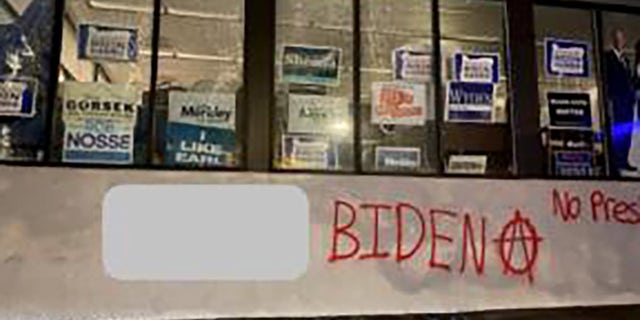 A group spray-painted an anarchy symbol and messages like "F— Biden" and "no presidents" on the Multnomah County Democrats campaign office in Portland Sunday. (Portland Police Bureau)

Another video shared by Independent Media PDX showed Biden-Harris campaign messages behind windows left shattered by the demonstrators. An anarchy symbol was also spray-painted on the building.

Police said the group quickly left the location and headed back southbound toward Laurelhurst Park. Officers arrived at the scene and made targeted arrests of people who had engaged in criminal activity. The remainder of the group dispersed into the neighborhood. 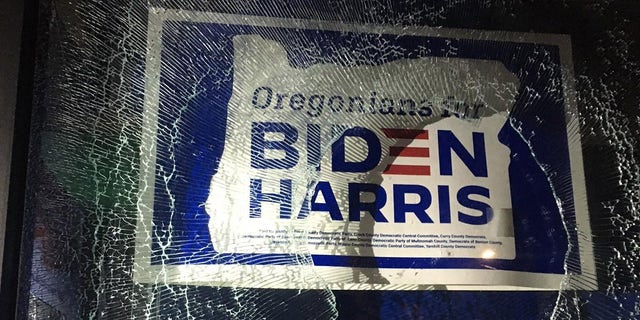 A group vandalized the Multnomah County Democrats office in Portland on Sunday. An Oregonians for Biden-Harris campaign poster is seen behind the shattered glass window. (Portland Police Bureau)

Another video showed the group appearing to wear black bloc attire marching through the park while banging on drums. Bike officers moved in and directed the group to remain on the sidewalk. A police cruiser also arrived at the park and sounded its siren.

The incident occurred hours after Gov. Kate Brown decided to not extend an order increasing law enforcement presence under the Unified Command, a partnership between the Portland Police Bureau, Multnomah County Sheriff’s Office and the Oregon State Police, to respond to election-related unrest.

On Saturday, celebrations broke out across Portland after Democratic candidate Joe Biden was projected to win the 2020 presidential election. Police broke up illegal street racing in north Portland, where someone also fired a gun into the air and crowds set off fireworks. No one was hurt. A separate celebratory gathering downtown by Pioneer Courthouse winded down that evening without incident.

Several dozen people marched in front of a building occupied by Immigration and Customs Enforcement (ICE), chanting "turn on the lights, come out and fight," according to the Multnomah County Sheriff’s Office.

It took about five days from the time polls closed Tuesday before Biden was declared president-elect, and before then unrest continued in Portland, with demonstrators leaving a path of destruction through the city, smashing the windows of businesses downtown and throwing projectiles, including a firework, at officers. Earlier in the week, Brown had called the Oregon National Guard into Portland and riots were declared. However, the Unified Command said law enforcement response prevented more serious crimes such as looting and arson.

Portland, a city with a history of clashes between far-left Antifa and far-right Proud Boys groups, experienced over five months of near-nightly violence in the wake of the death of George Floyd in police custody in Minneapolis at the end of May. Far-left demonstrators routinely targeted government buildings with fireworks and Molotov cocktails and sought to confront law enforcement.